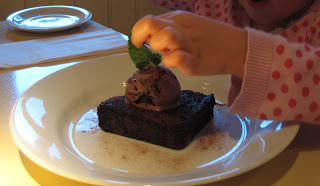 When Zebra-girl was very small my mother and I set off to go out for dinner one night on a summers evening. As we looked back at my house we saw her waving to us through a crack in the curtains at her bedroom window...we walked half-way to the restaurant and then decided that she was actually far too delicious to leave at home and rang Ian to ask him to help her pick out a dress to wear so that we might dispense with our plan A and instead take her out for some late-night pudding. She was quite beside herself with excitement and we chose somewhere ridiculously frivolous and grown-up to take her. So every year we try to have a girls night out. Last night, dressed in pink polka dots she dined on a glass of warm milk and a chocolate fudge brownie and yawned her way to bed two hours past bedtime....but we all felt a little guilty as Dinosaur-boy is now old enough to understand what he might be missing out on, and I realised that I didn't want to encourage her to keep secrets from him...so tonight Mr Teacakes, Grandfather Teacakes and Dinosaur-boy are on a boy's night out of their own and Dinosaur-boy looked just as dreamy and awe-struck as Zebra-girl had done all that time ago when presented for the first time with the prospect of late-night feasting.

Other delights have been a visit to the 3D Imax cinema at the Science Museum. Having been up to London two days running myself at the weekend, I felt slightly exhausted by the idea of going up for a third day, but that's what happens when you promise your children that you will take them to see The Fox and the Child locally without first checking that it is still actually being screened. My father accompanied us with a rucksack bursting with carefully packed treats that he might bring out to distract them with on the long train journeys. In the Imax we were given these huge plastic glasses to wear that were nearly as big as the faces of the little Teacakes...as we watched sea creatures swim inches from our noses and waves come crashing up to our bodies Zebra girl spent much of her time reaching out, convinced that she might actually be able to feel the fish brush past her fingers. The voice over was by Kate Winslet and Johnny Depp and was both informative and magical. 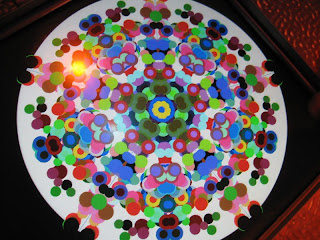 Later we spent along time in the pattern pod where children can manipulate colours with their fingers on this kaleidoscope-like screen...their creations are then projected onto a huge screen in front of them that can be seen by the people going up and down the escalators in the Wellcome (sic) Wing. 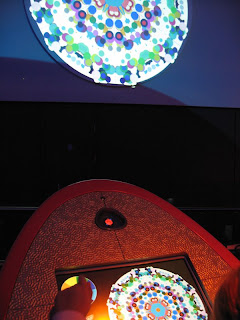 We are visiting friends for the next couple of day and I am feeling increasingly anxious that it has now taken 12 days for my overseas order of fabrics to arrive...part of me wants to cancel all further activity and wait by window for red vans...I think I may feel compelled to kiss the Parcel Force man if he ever does turn up. I do hope he's bracing himself for that!
Email Post