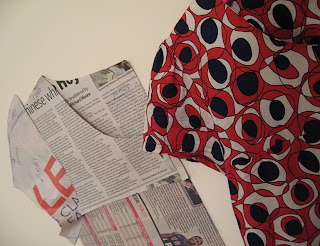 In my last post I wrote that my sister had asked me to make a copy of a dress that she already owns as a belated birthday present. After choosing the fabric for it together on Tuesday I set to work on cutting out a pattern...first I used non-stick baking parchment (what else?!) to make a template...but when I needed to stick some of my pieces together I came to realise that non-stick baking parchment is an incredibly effective product that will repel sellotape just as well as cake mix...so I set about transferring those templates onto newspaper...what luck that Mr Teacakes had left the Sports section from the weekend newspapers by my side! Once I had quadruple checked that all the pieces appeared to match the dimensions of the original garment I set about piecing them together to make sure they fit with each other perfectly...but found the carpet a shuffly place for such an activity and discovered that blu-tacking one's pattern pieces to a wall allows you to place and adapt things much more easily. I enjoyed sleeping with this on our bedroom wall for a night...it felt like a modern art installation. 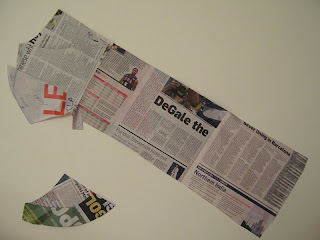 (dress on the right, facings on the left)

I have to admit to having felt slightly terrified when my sister put in her birthday request because I knew it would mean that I had to use my overlocker and the longer it has sat in the garage, the more fearful of it I have become. As I unpacked it from its box I felt increasingly sick...more so when the only stitches it would produce were poorly-tensioned and bobbly. After checking all the tension dials and discs and considering running away, I realised that in my anxiety I had forgotten to do the most basic of things and had been attempting to overlock without the presser-foot down. 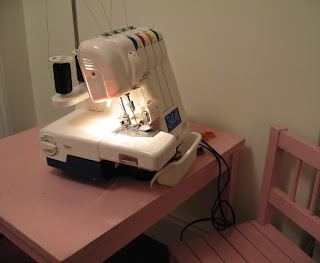 The other thing that I had been puzzling over was the logistics of making a dress on the overlocker - I knew I would need to regularly swap between the overlocker and my sewing machine (I sew at an old school desk, which has barely enough room on it for one machine, let alone two), so I ended up bringing the children's drawing table up from the playroom...which I have previously found fine for felt-tipping sessions, but I can reveal that it is less comfortable when one has to contort one's knee at strange angles beneath the table in order to use the foot pedal. 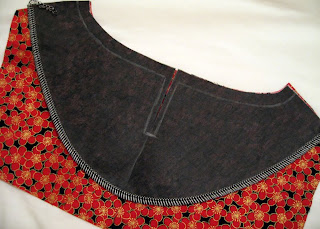 By Wednesday I felt that, with the help of Joanne & Helen who had very sweetly explained the basics and even emailed me relevant pages on facings, I had done all the preliminary research on this type of installation that I could do, but still none of it made complete sense to me...the only thing that did bring about a moment of clarity was when Jo mentioned in passing that it was like lining a bag. I clung to this idea like a life-raft, for bag linings I can do. So for that stage of dressmaking I pretended that I was making a bag...which made even the little keyhole for the button opening feel manageable. By the time I'd created the top section of the dress I felt like things had gone so well that I considered just stopping the whole thing right there and letting that small piece of perfection remain in isolation. I considered racing round to show it to my sister at that point: this is how lovely it could be...does your dress really need arms and a body adding to it, Laura? I felt these two things were bound to be ruinous. Several arms (for they were as problematic as I had expected, but I have learnt from my errors and feel that the whole thing would be much easier if I had to do it again... for those of you with overlockers: my initial attempt involved overlocking the arm and dress together in one go, but I now think it is easier to overlock the arm hole and the arm edges as single materials and then sew them together on the sewing machine and press open or to one side to finish) and many a choice word later the dress is finished. I have newly fallen in love with my overlocker, I have learnt lots of things that will make other projects easier and I have hopefully made my sister a birthday dress that she will be happy with - she is such a lovely clotheshorse that I feel vaguely confident that it will fit and look good on her....I will post the final results tomorrow, once she has tried it on and seen it herself....I so hope she likes it. Dressmaking feels very much out of my comfort zone - I feel so much admiration for those that dare to do it on a regular basis, I'm not sure my nerves could stand it. 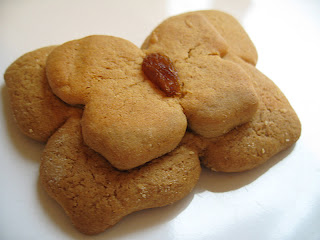 And finally here are some Gingerbread Butterflies that the little Teacakes made when we spent the day with my mother and sister on Tuesday. I googled for a recipe and the first result that came up was from Alice's lovely Raspberry...or should that be lovely Alice's Raspberry...either way is good I think....or perhaps lovely Alice's lovely Raspberry...whatever, her recipe is amazing and made the most perfectly soft and flavoursome gingerbread.
Email Post