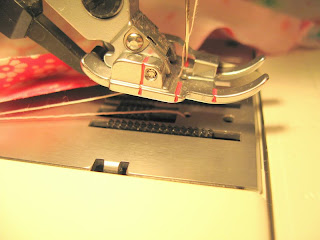 Last week I received an email from Pipany (I had been admiring the Grandad-style shirt that she had rustled up for her man) in which she mentioned how much she was enjoying using the walking foot that I'd told her about. I was so pleased as sometimes I feel reticent in recommending my newly acquired gadgety things as I assume that everyone must already have owned all these things for several years before I belatedly stumbled upon them. But I absolutely love sewing gadgetry, so the delight of knowing that evangelising about the walking foot caused Pipany to actually go and buy one and love it as much as I do...well, I suddenly find that I need no second bidding to share my delight in some other pieces of wonderfulness.

So, firstly, this picture above...can you see how tiny the hole in the needle plate is? It makes it perfect for quilt piecing or just about anything else where you frequently experience the corner of your material being sucked down towards the bobbin when you take your first or last couple of stitches. The hole is only big enough to accommodate the needle, meaning your fabric stays above the plate. Its restrictions are that you can only use it for straight stitches and with a central needle position...but then both of those things are fine for lots of projects. I think it's called a Straight Stitch Needle Plate. 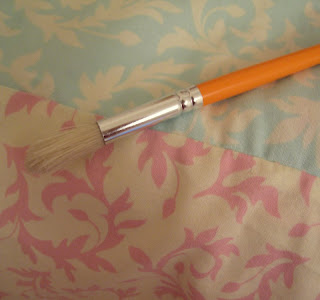 You may have noticed that my machine was looking a bit linty in the first photo (it's quite amazing what only becomes apparent in a macro photograph), which is where this paintbrush comes in. The woman who ran the fantastic sewing course that I went on recently, told us that these brushes that are sold for £1 in the Early Learning Centre are the best thing to clean your machine with, especially around the bobbin case...as one who used to only clean her machine bi-annually I am now quite disgusted by my old self, as my de-linting brush swooshes out such enormous cottony tumbleweeds on an almost daily basis that I can only think that my previous machine had been forced to become self-cleaning under my neglectful ownership. 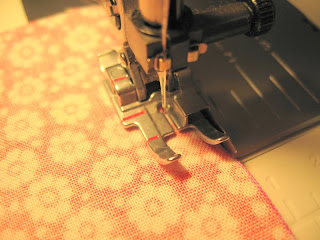 I think it was Lina who prompted me to buy this 1/4 inch foot, and it is probably my most used machine add-on. When I'm making my own patterns they always have a 1/4 inch seam so that I can use this foot (I think you can get them with other allowances, but that's a treat for another day). You can see at the right that there is fixed metal guide - you simply keep your material butted up against it as you sew and this produces a perfect even seam without the need for marking out your seam allowances. The little red lines on it show you when to turn as you're approaching a corner. I think in theory the foot is meant for straight seams, but I also manage to go around gentle curves with it. 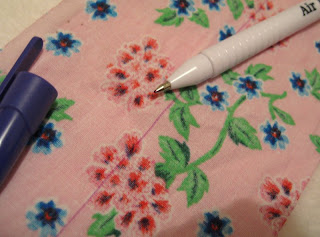 Last week I mentioned a new fabric marking pen which I came across quite by chance, as I had picked it up as a replacement thinking that it would be like all my other marker pens. The type I've used in the past (air & water erasable) have had a fine felt-tip style nib, which is brilliant, but I've found that they dry up quickly if you're having a long marking session and need a short rest before being able to continue, so imagine my surprise in opening this one up and finding something resembling a Biro. It is a dream to use, washes away easily and never seems to dry out and become awkward. It is made by Hemline and can be yours for £1.99. I have barely stopped using it this week and to steal a phrase from Katie Putrick, have found myself thinking that I haven't had this much fun since the pigs ate Uncle Billy. 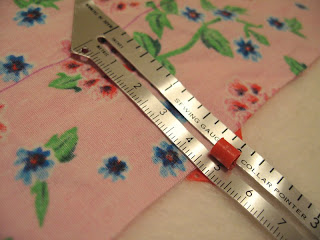 I feel sure that everyone must have one of these, but as I can barely sew without it, it seems worth mentioning (although I know Jo & Lisa both have them....and neither feel quite as excited by them as I do, proving that one woman's vintage Orla Kiely is another woman's crimplene underpants). For those seams where you need to mark out a tricksy measurement (or non-tricksy, but it's especially good for those times where constantly re-identifying where 23mm is would make your eyes hurt) all the way along a length of material this is invaluable. Simply set the red marker and then slide it along the edge of the material and make dots to join up later. 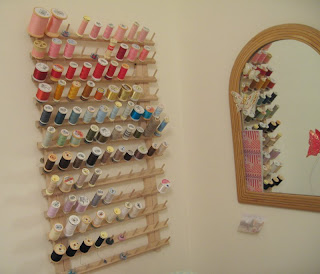 Lastly, I've mentioned this cotton reel holder before, but it proved to be so fantastic that I have since had to buy a second one to go above it, as the first was beginning to overflow. Colour order has been restored and I am no longer being forced to hyperventilate over the lack of space in the row for pink threads.

But, gosh, perhaps you have all been using these things for years? - I'm so sorry if this post brings to mind grandmothers sucking eggs (such a hideous image...in my mind the lady in question is wearing a polyester skirt and American Tan 10 denier tights, while toothlessly sucking on a freshly laid hen's egg complete with its shell)...does anyone have a more pleasing alternative to this expression - please do share, to save me from any more disturbing visualisations.