Firstly, thank you so much for all your lovely comments, emails and kind wishes you sent about my shop site (and even purchases!). Also, thank you to Lynsey (who has her own lovely shop here - best known for her wonderful trademark chicken doorstops, I've spotted that she also makes egg-box sewing kits...which I think is such a fantastic idea) who featured my site on Cuteable within a couple of hours of my announcing that my shop was open - what better start could I have possibly asked for? Ian was flattered to hear all your positive feedback about his design...and I am so grateful to him that he spent so many hours perfecting all that pink and red girlishness for me....he will be rebalancing by being generally butch and mannish this week.

Anyway, onto things delightful: last week Julia had very kindly offered to send me some soap nuts as she knew that I'd wanted to try some (for those of you that haven't investigated them already...they are a strange sort of nut that produces a natural soap making them a perfect environmentally-friendly substitute to washing powders - I will be trying them on my next wash). But goodness, what unexpected goodies arrived with them. I am slightly ashamed to say that despite having always taught my children that it is polite to open a card before a parcel or present, I quite forgot myself (I think it was the sight of the 'let's sew' badge on the outside of the fabric packaging that did it!) and they both crowded round and together we unwrapped the little parcels. Inside we found this collection of buttons (shown at the top). Zebra-girl gasped as I poured them out on to the bed (for she was having a day off due to being poorly), and studied them one by one, unable to believe her eyes at so much sparkly, shiny loveliness. The little stars and a packet of tiny necklace beads made me a little suspicious that I may not be their intended recipient and on opening Julia's card I was able to tell Zebra that all the things that she could see, that she was so breathlessly coveting and wishing to possess, had actually all been sent for her. Words can't quite convey her delight on hearing this, as well as her surprise and happiness that someone whom she has never met chose to hand-pick such treasures. 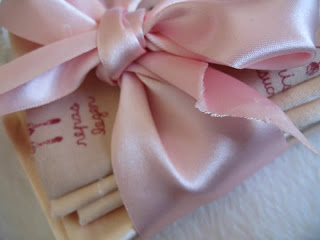 Julia has somehow surmised from my posts exactly what would appeal to my little Zebra and so there were tactile pieces of softest, drapiest velvet, as well as satin specially picked for its colour being identical to that of a ballet shoe. 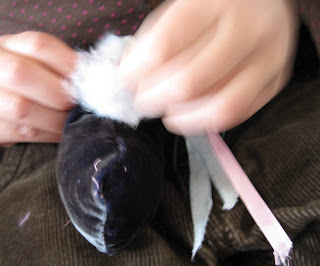 After lunch (attended by Zebra with one of Julia's lovely hair clips in her hair) Zebra-girl was inspired to sew and as Dinosaur-boy was home I felt torn by my wish to always say yes when she makes such a request, but also not wanting to spend hours doing something that would exclude her brother...which is why we ended up making squid. After reading this excellent book, both children have become completely captivated by the mystery that surrounds the Giant Squid and the dark inky blue of one of the velvets that Julia had sent seemed perfect for such a project. Dinosaur-boy picked out his own fabrics and was emphatic that this old Amy Butler print was what was needed, accented with some turquoise velvet for squiddy tentacles...he even hand-sewed some buttons on for eyes (with a little help), but unfortunately the little Teacakes ran away to have squid battles before I could photograph the finished creatures. 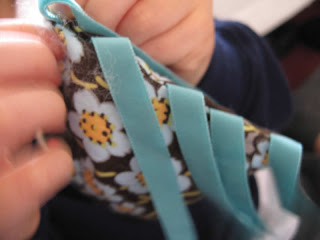 And look, Julia sent something for me too! This beautiful Cloth Store piece of loveliness...it is exactly what I would have been unable to resist buying if I had seen it myself. 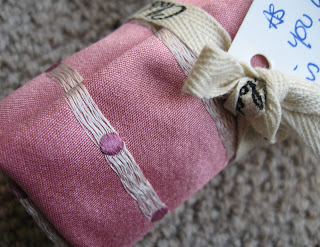 We felt utterly spoiled...but the resounding sense that I have been left with is happiness at the idea that someone could have been quite so kind, generous, thoughtful and sweet. Thank you, Julia, we will treasure the things that you sent.

And finally, after having friends over for dinner last night, I woke with the wish to spring clean (a little too much wine can do that to a girl, I find) and every cupboard in the entire house has now been restructured and re-ordered...but what I really wanted to tell you about is my new partner in cleanliness. Our old vacuum cleaner had a habit of overheating, sports a plug held together with sellotape after being suctioned back into its storage port a little too enthusiastically and hitting furniture on its way, and finally Ian threw an essential part of it in the bin on his only venture into bag-emptying, which meant that I was recently given the task of buying a new one. Hours of research (but no PowerPoint presentations...which signifies that I was some way from melt-down) happily left me with only one option. I had no idea that a vacuum cleaner could be such a delight, and had never dreamt that something could gobble up stray threads from a carpet in the way that I have since witnessed...my sewing sessions were normally ended by a lengthy combination session of vacuuming, picking individual threads up and cursing the fact that someone was yet to invent a giant Velcro pad that would more easily grapple the threads from their tangle with the carpet (that sounds alarming like a Giant Squid, I know)...but no more, it appears as though I've just laid a new carpet after vaguely waving the nozzle in the direction of the room for less than two minutes. Amazing!