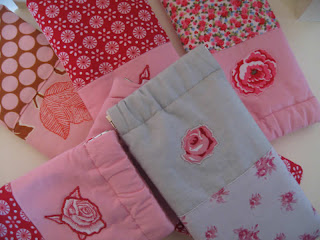 Thank you so much for all your comments on my somewhat wordy last post on verbosity last week...they were all appreciated and it was so nice to have such warm encouragement to warble on still further. Giles...you see, you just didn't get it (see end of last post for recap on who Giles is). 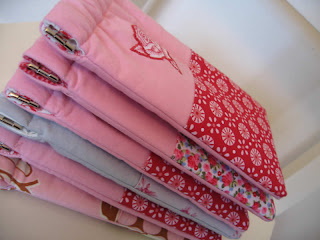 The week before last, I was asked to make some glasses cases...which started an almost unhealthy addiction to the making of them. What a lovely idea I thought and then anxiously ordered five flex frames from Lovely Lisa, wondering whether I would actually be capable of making them (this currently seems to be the starting point for most of my endeavors), but thinking that if I could, then I may also make a couple for the craft fair that I'm doing at the end of November to make the postage costs worthwhile. 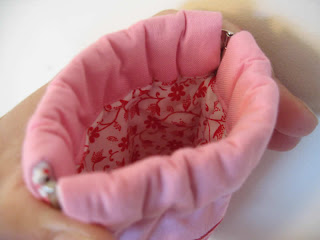 Well, the delicious flexes arrived and their flexing was so satisfying and their small chromey bits so shiny...and they have proved to be the most perfect reincarnation in another form for the the style of the teabag holders that I make...and I have been having so much fun making them that less than a week after the first purchase, I placed a repeat order, asking Lisa to stop me if I tried to buy any more...but then a friend came visiting while the second batch were being created and asked if I might make one for her mother and another for her little boy (with a crab on....gosh, glasses cases for children opens up even more avenues of fun)....which meant that a third order had to be placed...and it is never economical to order just two of something...so I now have rather an abundance of glasses cases for the craft fair and the ones pictured are just the tip of the iceberg...I have since ventured into many more fabric types and colourways. 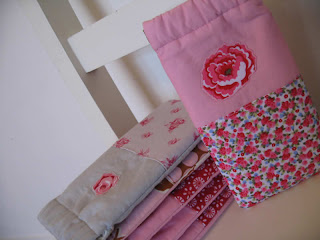 I have also been making up vast quantities of stockings. Four of the ones pictured were for custom orders...but again, the surplus are stock for my table at the fair. 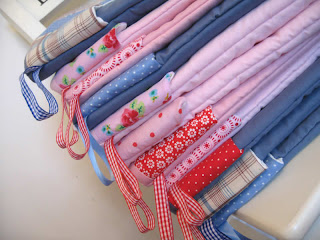 Making things for a fair is a strange thing indeed....most of the time I am propelled by thoughts of: I have a 6ft table to fill, I must make large quantities of everything to avoid having only an expanse of white table cloth with a teabag holder in the centre...but then another part of me niggles away, wondering at the knowledge that these weeks of frenzied activity may result in a wet squid of an evening where I sell nothing and fail to cover even the cost of my table. I am regularly having to send a large (but thankfully entirely imaginary) JCB through my head to shovel these thoughts to one side. Although for the most part I'm feeling generally more positive about it after one of my dearest friends, who knows me very well, offered to accompany me to it, instinctively guessing that I would be close to hyperventilating every time I thought about standing behind my table of stitchery alone...so if nothing else we will spend the entire evening giggling and I would happily pay the table fee for that. 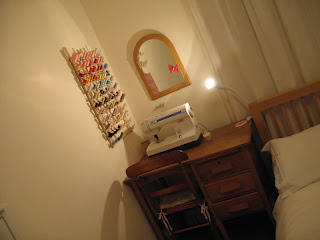 But as of last night my stitchery is all being done from a different desk; an early Christmas present. For the last couple of years I have worked on a tiny old school desk (I think it's in my sidebar somewhere) with irritatingly inaccessible storage in the form of a lift-up lid, and barely room to either side of the machine to put a pin cushion....but my father (yes, giver and finder of so many lovely sewing-related things) happened upon this desk...possibly the smallest, but most perfectly formed desk with drawers in the world...and it even has a pull-out paper rest. It is 35" wide...but the room to put a pin cushion and a bag of fabric marker pens and measuring gauges next to me while I sew feels like a whole new level of luxury.
Email Post