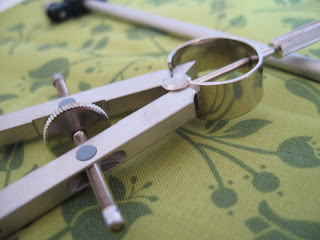 This large shiny new compass was one of my Christmas presents from Ian. So many times had he walked into the room to find me surrounded by upturned pots, pans and laundry baskets trying to locate just the right size circle to draw around for my latest sewing project that he sourced a special compass that has extension poles to turn its circle-drawing capacity from large to super large. It helps that it is so lovely to gaze at and that it looks like an architectural sculpture in its own right...it makes me think it will create a superior type of circle, one which I will go on to do great things with...but for now it assisted me in making some cat beds. 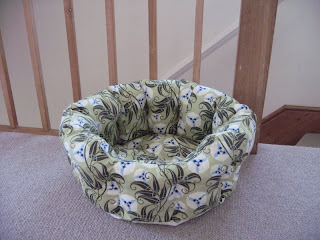 Looking at the cat beds in the pet shop was a whole new world. Two weeks ago I didn't want black fleece materials with paw prints over them around my house...so why would cat ownership change this, I wondered? I could almost feel myself being pulled into the vacuum of cuteness, but at the last moment I put down the fur-lined pyramid-bed that my children had been encouraging me to buy (it was a single bed, so two would have cost a whopping £70!) and told them that I thought we might just make some instead. Pet sewing was a whole uncharted water for me and I thought there might be fun to have there. The word fun doesn't quite do it justice though...it was utterly thrilling to sew thinking of their happy little faces resting on my creations and now I have worked some puffily padded Amy Butler loveliness into my utility room in the process. They have padded sides with a plump removable cushion on the inside... SO cosy. One of the cushions is even stuffed with duck-down as I thought that may make it especially luxurious...I was feeling less generous by the time it came to making cat bed number two though as there is no tidy way to stuff anything with down and the room had ended up looking like I'd had a pillow fight. So there is Bed No 1 on the landing...what could a cat do to endear itself more to it's new and a little stressy seamstress owner (for Bella especially is some kind of fur machine and so our bedroom/sewing room door can never be left open again, as lovely Pipany said, the idea of selling anything with cat hairs on is just too traumatic to risk it), than use the bed that she has just stitched for it...well, they sniffed it, and then they left it for a day...and then finally in the middle of the night I went downstairs and saw that Bella had secretly curled herself up in it and was willing to be photographed. 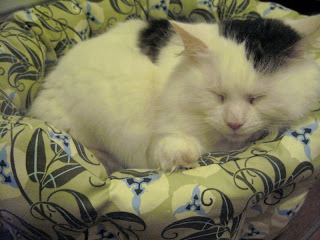 However, it must be said that her behaviour has been far from impeccable. Last night after tea we were alerted to the fact that all may not be well by the sound of frantic banging and mewling coming from inside the chimney breast in the living room. It didn't take me long to ascertain that not only was she stuck up the chimney, but that on her entry she had knocked the hatch in the fireplace down and, with her weight on top of the the hatch, she had effectively locked herself in there. Calm in a crisis, I screamed very loudly, making both the children cry before managing to recompose myself. Our task was to implore her to climb higher so that we might open it up again...what eventually emerged was a shockingly black cat that streaked straight across my treasured living room rug, splatted its paws at the sofa, before hurtling out into the hallway and up the stairs (and yes, the bedroom door really is always closed, so at least I knew my fabrics were safe, if nothing else). Frantic and hyperventilating (her, not us) we had no option but to try and bath her, which was only partially successful, as this is how she looked after the bath: 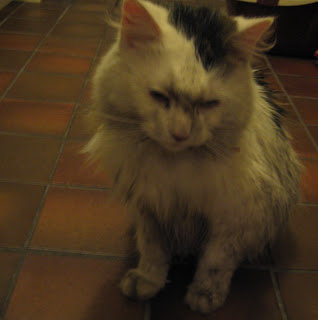 After looking anxiously at her grey matted fur all day today, and her depressed little face I finally decided that I may not be big enough to tackle this alone and took her to the vets where they offered to bath her with special shampoo. Two hours later I went and picked up my newly happy cat, who's previously snowy coat now has a slightly yellowish tinge to it, but is no longer grey and starry at least. Ian cheerfully tells me that I must look upon the challenges of her hair loss, terrifying mishaps and potential half-dead 'gifts' caught fresh from the garden as a great adventure...I am thinking that cat ownership may well be like an extreme sport with all the adrenalin rushes that might equally be gained through skydiving. I have not been previously known for my love of such things, but there seems to be nothing left to do other than to jump out of the plane joyfully shrieking: let the adventure begin! 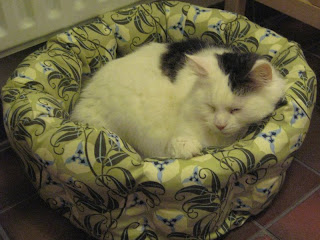 So for now, Bella is back safely snuggled up in her bed probably dreaming up new misadventures (Honey has proved far less troublesome AND is enjoying her bed, what a perfect example she is attempting to set - if I had to pick a house prefect it would certainly be her...although Bella's mishaps are strangely endearing). Anyway, aside from the cat beds I really do have the most enormous stock-pile of sewing-related goodness to share now (for I fear it could seem as though this is turning into a feline-themed blog...which is just not the case at all). The time to blog seems fleeting at the moment, but I'm sure it's just around the corner and that I will be reunited with it soon. In the meantime thank you so much for all your lovely comments on my rather sporadic blog posts. x
p.s. If you want tips on hair control for cats then do go and look in the comments on my last post - Gigibird has left mention of promising products and I already have a Zoom Groom on order on her recommendation.
Email Post