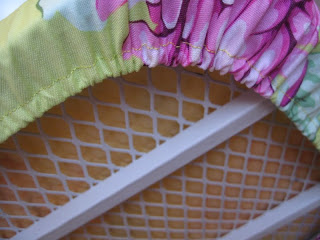 It may seem untimely to be talking as though it's still the start of the year, but as I only managed three posts in January and they were largely cat-related, then needs must! One of the things that I'd spent 2008 resolving to do was to make a new ironing board cover (not the main house ironing board, but my miniature sewing room one) and I felt utterly depressed to find myself hurrying to make up orders before the last post on the 21st December using non-stick plastic sheets to protect the materials from the horrors of the ironing board cover beneath, knowing that the year would end with an ugly ironing board still in my possession. I've found that there is simply no neat way to applique and the use of the sticky web to join the tiny applique pieces to the main fabrics means that the ironing board bears extra grub as testament to every new project undertaken. So, one of my first happy tasks for 2009, having bought a special fold up mat to which I will confine future ventures with applique web, was to make a new ironing board cover that will remain pristine, for use only when pressing. 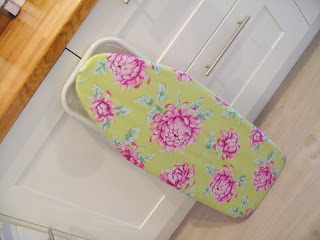 I was quite shocked by just how easy it was to make and also that it is one of the few projects that truly can be completed in less than an hour. Ironing has become quite wonderful. 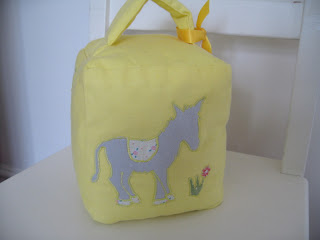 After the ironing board cover, one of my first commissions this year was to make an appliqued doorstop for a little girl. Which would have been really quite simple, if I hadn't been expressly told that I was not to use pink. I was also told that a donkey and a tractor were to be the subject matter. After my brain had finished imploding I realised that, when it comes to sewing, it has become entrenched in my thinking that things for girls require baskets of pink and red fabrics to be brought out, and boys will require tubs of brown & blues from the cupboard. By a strange coincidence that same morning I had read some of my backlog of weekend newspapers as I'd dressed and had happened to look over an article in the Guardian entitled Hurrah for Tomboys!, which talked about the way that our girls have become saturated in pinkness over the last 15 years and mourning the loss of the more universal colours that characterised the childhoods of previous generations, where tomboys could more happily exist. I felt quite horrified as I read on and realised that even though my own daughter's favourite colours at 2 years old were purple and orange, it hadn't even occurred to me to decorate her room in those colours. I had gone straight for pink and perhaps she learned to love it, or perhaps she conformed to what was subconsciously expected of her, but at some point purple and orange stopped being mentioned. So when, only hours after reading the article, I was faced with the proposition of not only creating something for a girl that wasn't pink, but that was also to feature themes that to my jaded thinking were more typically male, it dawned on me that I should sew with admiration that there was still a child who, tomboy or not, had avoided being whitewashed by pinkness and princesses. So after much deliberation and more than one consultation call to my mother, I chose yellows & greens, greys & a small amount of red, and oddly, with its lack of saccharine, it has really grown on me and I found myself feeling temporarily nostalgic for the time when a whole generation of children, boys & girls alike, were dressed in generic brown or navy dungarees from Mothercare (is there anyone is didn't have a pair of those?!). Here's a photo of the doorstop mid-construction, included only because I've realised that I really love looking at the half-finished sewing of others. 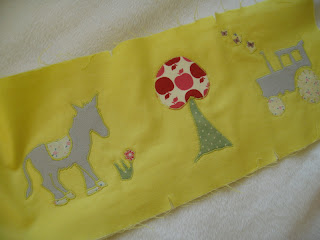 Doing this project made me very aware that my stash is slightly limited in colour...so what better excuse to go out and purchase some more greens and yellows once it was finished. 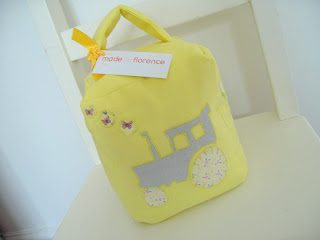 And as a postscript, an apology. It would seem that I am one of life's poor emailers and although I seem to have achieved little this month apart from making large unwanted holes in the wall with powertools, it seems emailing time has eluded me. But as you can imagine from the length of my infrequent posts, my emails tend to also be very long...which does put a limit on how productive one can be! I know that concise & frequent is better than profuse & rare...but it just never seems to happen that way.

As to the holes: Mr Teacakes turned white when he arrived home to see the resultant devastation of my attempts at further cat-proofing. I claimed I had been trying to be helpful, but really we both know it was that I was too impatient to wait for him to get home from work. As penance I am on polyfilla duty for the next two weeks! And no, I am not permitted to apply a large wodge in one day, which would have been my first approach. Apparently it has to be layered gradually. You may wonder how my cat-proofing has become so elaborate that drills are now required. Well, once the cats are allowed outside they will come back into the house through the utility room, where our coats live. One of my biggest fears in life is rodents and amphibians, especially half-dead ones, so I decided that the only way that I will never have to suffer the uncertainty of putting on my coat not knowing whether I might find that a sleeve has been deemed a good hiding place for a one-legged mouse on the run, was to rehome the coats on new coat racks near the front door. On Saturday morning the coat racks were put up for a second time. This time perfectly aligned and attached firmly to the wall. Well done Mr Teacakes!