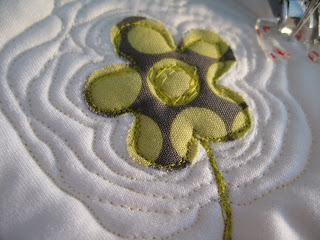 Well, last week really did end up feeling all together holidayish. With my gardening companion installed for the first part of the week, overlapping with Mr Teacakes taking a week off work to work on his music from his soundproof cell (and actually, it really is like a cell, so instead he set up in the playroom while the babes were at school), it seemed like a week when sewing could take a more experimental turn.

A couple of weeks ago I was having one of those evenings when Internet travels are drowsily continued only to avoid having to turn the laptop off and get on with the tiresome business of brushing one's teeth before falling into bed (I don't know why I never learn that it is simply better to turn the computer off the minute I have finished checking the weather, rather than remaining delusionally hopeful that magic fairies might appear to do it for me). Anyway, somehow in this drowsy haze I found myself on a blog called Don't Look Now that acted like a dose of smelling salts and left me sitting bolt upright in a such dizzying excitement that I nearly had to lie straight back down again. Oh dear. Am I gushing? How undignified. But really, the applique stitchery on there is breathtakingly lovely. Which is what lead me to the doodling shown in the photo at the top of this post: I've always previously favoured the overlocked applique method (shown here if you haven't a clue what I'm talking about but have a wish to know) as to me it looks neater and feels more 'finished'...but seeing the effect of the free-motion* (*explanation at the bottom of this post) quilted applique on the Don't Look Now blog made me feel like I had been missing out on something rather wonderful (as well as seeing Mette's beautiful coin quilt earlier this week with her lovely wavy quilting which made me long to be able to quilt using something other than straight lines). 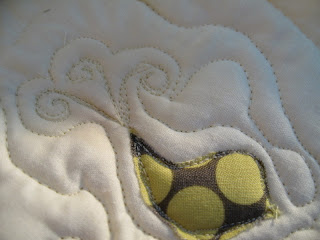 I love the three-deep lines of stitching used to form the birds tail (which I have attempted to imitate here and found it to be so much harder than it looks) and the way that the thread always matches every individual fabric piece which must be so time-consuming, but looks so wonderful. Anyway, as you can see from my first effort I found it difficult at first to consistently move the fabric at the same speed so as to keep the stitch length regular...as well as it being difficult to keep an even pressure on the foot pedal to keep the stitches coming at the same rate. I eventually found that it was easier to keep the stitch length more even when I pressed down harder on the foot pedal...but other than that my technique has remained rather experimental.

But what fun it has been trying something new (although not entirely new...I tried it when I first bought the Big Foot over a year ago, but found it so difficult that I gave up after ten minutes). How very much I would love to hear your tips on free-motioning if you have any! 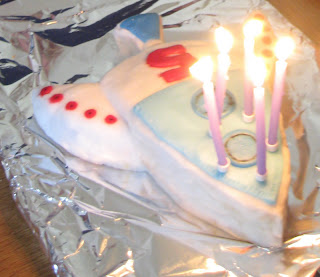 This weekend we have had Dinosaur-boy's birthday party. He was five. I can't quite believe how old he is...but also how very young he still seems. He has little of the worldliness that Zebra-girl possessed at his age and still seems happily round-cheeked, lispy-tongued and sweetly naive, only to occasionally startle us with a question or comment that belies the air of littleness that he usually carries with him; recently a question about wartime evacuees and his obvious brooding anxiety about whether where we live would be classed as the city or the countryside suddenly appeared mid-Lego construction. Mr Teacakes made him this rocket cake which we are still gobbling our way through...he has also been making wooden borders to the flower beds in the garden. This has involved much hammering. I have sat on a chair and provided moral support... and photographed the flowers...I feel all gardened out after last weeks efforts. 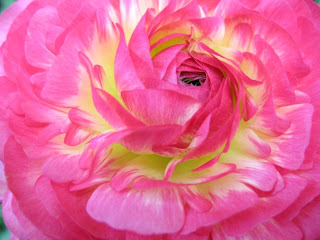 Anyway, the two photos of my stitching attempts were actually taken at night, but I seem to have accidentally stumbled across something that gives the illusion of sunshine! My desk lamp has a 40w reflector spotlight bulb in it that gives a very white light...with the sewing machine light turned off (as this tends to be very yellow) it all seems very day-timey. So after a winter of struggling to take pictures through the gloom, I have realised that were there to ever be a nighttime photographic emergency I would be well-equipped to deal with it. What a pleasingly Girl-Guidish thing that is.
*What is free-motion quilting? Unlike every other type of sewing where your feed-dogs guide the material and regulate the stitch length, with free motion you have your feed dogs down and can basically doodle in whichever direction you wish. Oh how delightfully easy and relaxing that sounds!
Email Post