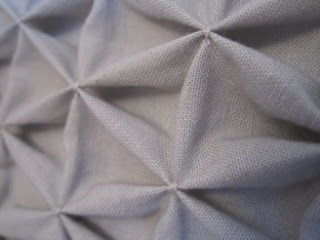 It was with great excitement last week that I started working on this cushion as the honeycomb aspect of it is something that I've had in my head for a long time...ever since making this bag. I wanted to try something similar using a crisper, more easily creased fabric. I had actually meant to honeycomb the entire cushion but my selective memory had allowed me to forget how long this might take...I passed a happy four-and-a-half-hours slowly working on the section that you can see in the final cushion, listening to the radio and generally feeling happy to be doing some hand-sewing, until I decided that this was utterly self-indulgent and that I must create a cushion with only a honeycomb panel and leave it at that. 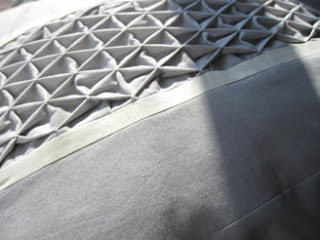 This is perhaps where things went wrong...I've also been wanting to make cushions in greys and creams, and so putting a little cream border around the edge seemed the logical thing to do. And then some more grey to finish off. 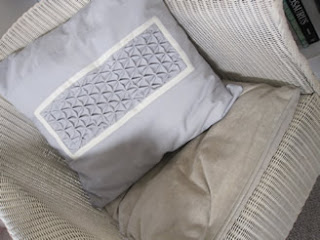 I felt quite pleased with it for a while...I'd found a new way of inserting a zip into the back of a cushion that completely concealed it and was easy to do (more and possibly a tutorial on that later...although you may - very sensibly - wish to refrain from taking instruction from anyone who could make something such as the above) and this was making me feel happy. It was only when Mr Teacakes arrived home and glanced at it sitting in the chair in the corner that I realised that I'd made something a little odd. I think that the gist of his thinking was that I'd created something that had a car-crash of styles within it...and that while the honeycomb pleating may be pleasing for the actual sewer to create (yes, that's me) that it wasn't necessarily what he'd choose to have in his own home. 'Fussy' and 'overly structural' were the two comments that have stayed with me and he found the cream edging panel particularly offensive...and all of this rang true when I looked at my cushion more objectively. It's so odd how sometimes you lose sight of what something actually looks like when you're working up close on it. This may all sound like Mr Teacakes was being horribly untactful, but he wasn't at all and I'm just as frank about his website designs. 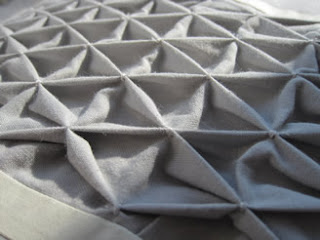 All of this hasn't put me off using honeycomb pleating on bags, but it has made me feel that our house may be a honeycomb-free zone.
Having used all my lovely grey cotton up on this abomination above it needed replacing and so this little pile acted as the perfect comfort purchases. I had also run out of creams...it helped them go into the basket when they look so nice together. The black at the bottom is earmarked for a sleeveless top for me...I have a really clear picture in my head of how the top will look...now it's just trying to execute it! 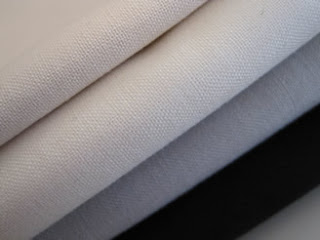 I have added a 'follow me on twitter' button to the side of my blog...I have no idea why I have signed up to this, apart from that sometimes while sewing I have thoughts about sewing-related things that seem to have disappeared by the time I come to blog about things...and sometimes I see exciting things on my internet travels that I feel like I must share with others and then never do (there's a danger that my blog could become an entire list of links if I did). Mr Teacakes has strong opinions on cushions and Twitter. He has extracted promises from me that I will never write things such as 'about to eat lunch', or 'leaving the house now' and that I will only use Twitter in relation to sewing. As eating and leaving the house are often ignored in favour of stitching I won't find it too hard to keep within his guidelines.

My blog name has already been taken on Twitter, so we spent an amusing hour last night thinking up 15-character alternatives while Mr Teacakes was building Lego surprises for Dinosaur-boy to find in the morning and I was working my way through a series of bizarre floor exercises (necessary to make up for the cream egg(s) that passed my lips yesterday...every year I forget quite how good they are). I quite liked Flossie8teacakes, but in the end we decided on the more postal address-sounding 1FlossieTeacakes. Lovely Jenny quickly made the whole thing suddenly seem less faceless - thank you!
It has been half-term this week. We have had the most lovely time, mostly seeing friends, but also fitting in a Pyjama day doing arts and crafts. I'll show you what they made once I've had a chance to take a photograph of it...construction was rather involved and so I completely forgot to take any pictures.