A quilt for us 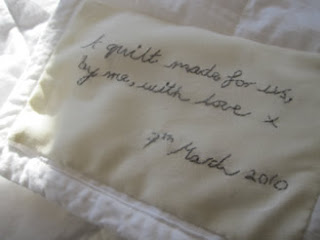 Thank you so much to all those lovelies who have bought a copy of my Lis iPhone Holder PDF. I've had several emails regarding selling rights for my patterns as I had said that I was happy for holders made from the Lis pattern to be sold by small businesses, whereas previously I'd said that any bags made from my Tabitha Bag pattern were for personal use only. It seems too higgledy-piggledy and confusing to leave things that way, with different patterns having different selling rights, and far easier to update this to say that my blanket rule is that I'm entirely happy for small, independent businesses to sell things made from my PDF patterns (including the Lis iPhone Holder and the Tabitha Bag) as long as my pattern is credited in your item description if you're selling online. I hope that clears things up for you. It may take me a while to update all the Tabitha Bag pattern pieces and information to reflect this (as the original document is currently on a broken hard drive - arg!), so if you receive the PDF in the meantime, please feel free to ignore the 'for personal use only' references.

Anyway, back to the photograph at the start of this post. This is the quilt that I made for my and Mr Teacake's room. To someone who loves quilting for all its myriad of colours and the way the patches of fabric mingle and play off one another, this quilt may well be the epitomy of 'dull' and I can understand that. It is, however, something that I've wanted to make for the last year or so and its lovely fresh whiteness and occasional snippets of cream make me feel truly happy. 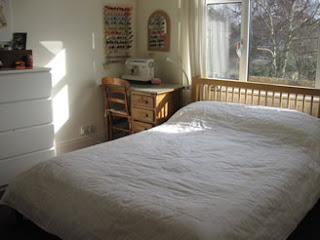 Because I work from our bedroom and all my fabrics are stored in there I seem to have a never ending line of people visiting...some of whom I know well, others whom I've never met before who are the friends or relatives of other local Made by Florence customers. All our bed linen is white and I've found that even if it has all been freshly laundered and ironed only the day before, somehow the pillows never look completely unslept upon and there's something horribly vulnerable about someone seeing where your head lays at night (yes, more so than where your actual body lays, I think). A big, white, bed-enveloping quilt seemed the answer. 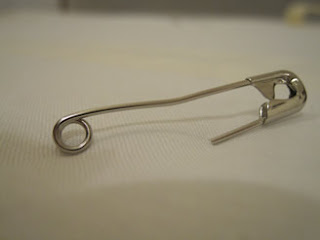 I encountered several problems while making it...the first was that I'd never made a double quilt before (although actually this was bigger as I bought Queen sized batting which measured 108" x 93") and had no idea quite how much space is needed to lay one out and pin the quilt sandwich together...even my daughter's room (I'm unsure how she ended up with a bigger room than ours) didn't have quite enough floor space. I finally had to move the dining table to a different room, which made the Little Teacakes dance up and down with delight as they love things being moved around. 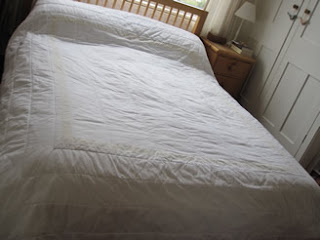 I used Quilter's Dream Puff for the batting, which has a 1/3" loft and is incredibly warm and, importantly, is completely white, so as not to discolour the cotton that was to be put on either side. I haven't used a synthetic to quilt with before and initially was most disturbed by it. I had always dismissed as being a little fusspotty that hilarious selling point so often written on wadding packs of 'does not beard'. However, working with something that does 'beard' every time you try and smooth it prior to pinning was quite maddening and I can see why the clean shaven batting holds such appeal (also if felt horrible to touch...most unnatural). However, once it was all pinned, the Dream Puff gradually began to win me over as it was easy to sew through and the quilt felt light, warm and cosy once sandwiched by cotton. 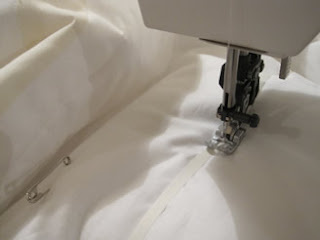 Instead of using disappearing ink to mark out the quilting lines, I bought some of this 1/4" quilter's tape that you can sew alongside. It was moveable and quick to use and so it seemed like £1.95 well spent (you can see it in the picture as the narrow cream line...it blends with my design quite well, but I don't think it normally displays such chameleon tendencies).

I quilted the middle of the quilt with widely-spaced vertical lines and then for the outer sections I followed around the cream rectangular border with more narrowly spaced lines of quilting. 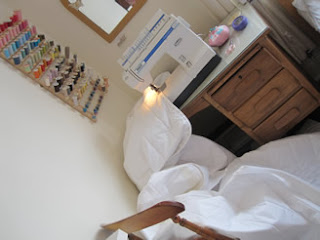 I'm unsure how I fitted into this picture, but I can report back that my memory of it was that it was cosy!

My verdict on the wadding is that I love it - it is so toasty and light and feels far more snuggly than Dinosaur-boy's quilt (which I've realised that I still haven't got around to blogging about...just in case you want to know right now, I used Warm and Natural for his quilt, which I really dislike as it seems to me to give a disappointing finish compared to Hobbs Heirloom batting). It doesn't quite have the amount of loft that is promised on the packet, but is more lofty than most. I chose not to pre-wash my cotton so that it would shrink a little on the first wash to give it a more antiqued look and was really pleased with this: an even shrinkage that makes the quilt look more pouffy.

The other thing that I hadn't counted upon when I set out on making this was how much it would cost...a Queen-sized quilt is just so vast. For the reverse I used an egyptian cotton flat sheet that I picked up in the sale, which at £30 was less expensive than it would have been to buy the same quantity of quilting cotton. I was worried about how this more densly woven egyptian cotton would quilt and shrink, but actually, it's fine on both counts and it was a cost-cutting exercise that paid off. Hurrah!