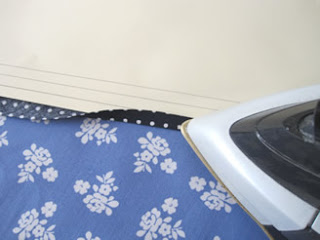 In the absence of anything finished to show you, as I've been working on writing up another pattern all week (not the lined skirt...but that will be coming!), I thought I'd share two things that possibly give me far more delight than is healthy. But there's something intensely pleasing about making something simpler than it might otherwise be. The first is creating hems. When I first used to hem things I'd very carefully measure all the way around, marking the seam allowance at frequent intervals and then pinning it all up carefully...a process that seemed to take a long time and rarely gave completely perfect results. But about a year ago I discovered that by taking a piece of A4 card and ruling lines across it at 1/4" intervals, I could then simply turn the bottom of the fabric up to rest on the line, with the card resting neatly against the inside fold, and create a perfect, even turn up. This process is then repeated with another turn so that there's no raw edge. Perhaps I have arrived at this late and everyone else always has always done it this way (I feel fascinated by people's methods. I once watched someone else thread up a machine and was intrigued to see that she pulled her bobbin thread up with the presser foot down...it had never occurred to me to it that way, but now occasionally I do and think fondly of her), but I wanted to share the fabulousness of this method just in case there are a few who are yet to discover it. 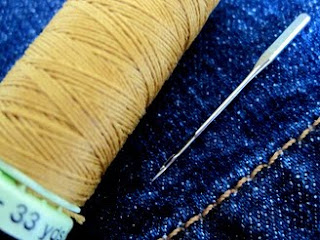 The second thing that I only learnt of only this year is top-stitching thread. Whenever I shortened jeans in the past (which is often, being petite) I'd look at the lovely line of thick top-stitching at the hem that I was cutting off and feel traumatised by the insubstantial line of thin-threaded top stitching that I would replace it with. Sometimes I would use the triple stitch on my machine (where each stitch is sewed three times), but this didn't look quite right either. I imagined that jeans-making factories had large and wonderful industrial machines that produced this illusive Super-Stitch and longed to have one installed in my garage. So you can imagine how much self-restraint it took to not become completely jittery when I saw something called a 'top-stitching needle' in my local sewing shop. I studied it and saw that it had a much larger eye than usual and my heart began to flutter with the feeling of hope at the thought that this might mean that thicker stitches were a real possibility. (Yes, occasionally I have to admit to feeling akin to a Twitcher having seen a particularly rare bird in the distance, and am sure that I become temporarily bearded and macintoshed and breath thickly through the coarse hairs that curl around my lips).

I sidled around to the work station once I had recomposed myself (Mac and beard mostly out of sight) where the man was busily repairing sewing machines and tried to sound calm as I asked what exactly the needles might be for and what type of thread might be used in them. Jeans. Top-stitching thread. Spool of regular sewing machine. These were all terms that were uttered casually in reply, with no awareness as to the gravity of his words or the effect that they might be having on the listener (Don't worry. I did not kiss him). 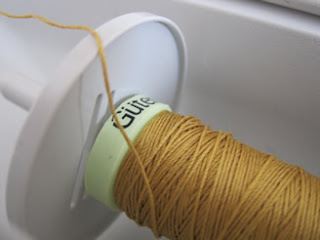 So yes, there's this lovely thing called Top Stitching thread. It comes in a limited number of colours, and many of them are different shades of what I think of as jeans-stitching colours. You will need a top-stitching needle to use it. It will mean that you can shorten jeans and then walk around feeling like your jeans might actually have been intended to be just that length...as though it is perfectly normal to have legs that are only 2" long. Tall people can have fun too: you can top-stitch bags and other things and it will look good. Very good. Like you have a big industrial machine in your garage that does special thick stitching.
Email Post