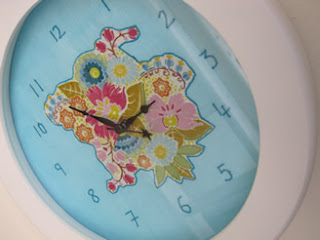 Yes, it's another item featuring Anna Maria Horner's Square Dance ...you'll be relieved to know that I've only ever been in possession of one panel of this fabric, so there's a limit to how long I can sew exclusively with it. However, rather than hiding it away I wanted to share this one with you as it was such a happy upcycling project (actually, I really dislike the word upcycling...it sounds like one of those awful buzz words that men in advertising use. Sometimes I think I may need saving from myself or just my keyboard confiscating). The clock frame and hands belong to the very pink Laura Ashely clock that my mother bought for Zebra-girl when she about three or four. However, yesterday I took it apart and re-covered its face.

I used a beautiful blue, slightly iridescent, fabric for the base and some bright metallic turquoise thread to sew the numbers with. 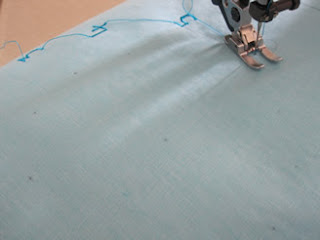 I used a protractor to mark out the placement of the numbers (each number is 30 degrees apart) and then drew them in disappearing ink before sewing them with a closed zigzag stitch on my machine. 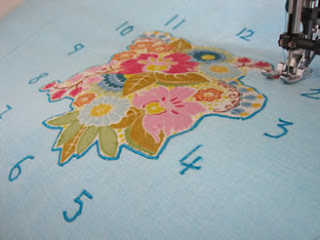 Next I appliqued the flowers from the Square Dance panel on to the centre, before cutting a hole for the clock workings to poke through. 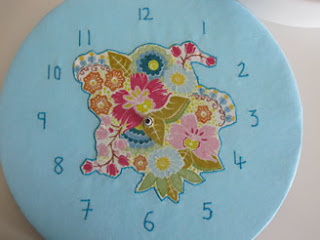 I then stretched the fabric over the clock face, using masking tape on the back to hold the fabric in place. And finally I mounted the clock hands, trying very hard to remember in what order they were meant to go on, placed it back in the frame and then kept my fingers crossed that the clock would still work - and it does - hurrah! 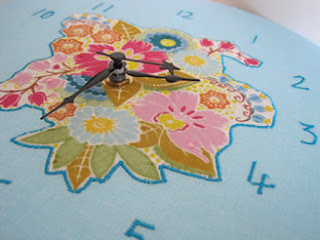 It's now safely hidden from view ready to be wrapped up for Zebra-girl's birthday next week...I'm so excited about giving it to her, even though I'm feeling a little guilty that she's receiving her own second-hand things for her birthday...is that wrong?