Making a 'Homage to Johnnie' dress... 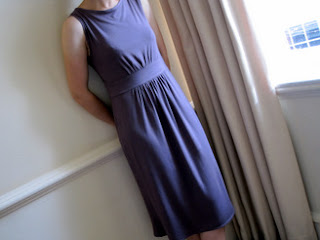 Meet my latest dress! It came away for the weekend with me (that's a whole other blog post, but we had a wonderful time), although I only finished binding the neckline in time for it to be rolled up and squashed into my bag at the last minute. Luckily, it's a lovely, soft, drapey jersey that doesn't crease and responded well to this kind of flash bag packing (in which I packed barely any clothes, but five pairs of shoes. In my defence I wore every single pair at some point as the many different things we did could all be accommodated easily by rapid shoe changes). 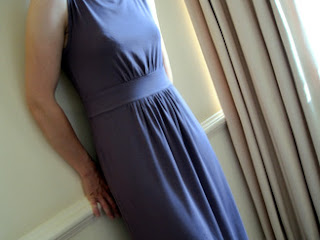 This bamboo stretch knit arrived from the wonderful Ray-Stitch last week. It's actually the dusky plum colour (labelled as 'mauve' on the website) - it looks to be a deep lavender in the light of these photos, but it's very much plum in reality, which I love. I was tempted to make another Miz Mozelle dress as it would be the perfect fabric for doing so, but I was a little torn as I also wanted to try something different.

This dress is a self-drafted pattern based on a Boden dress already in my wardrobe. The Boden dress is one of my favourites, but it's made from a double-layer of fine, gauzy fabric and the slightest thing causes plucks which puts me off wearing it when I'm around small children, animals...and myself (as I'm more than a little accident prone). So this dress is something of a homage to Johnnie Boden in a more Florence-friendly fabric. It's still incredibly soft, drapey and luxurious, but it doesn't make me feel like I may unravel at any moment. 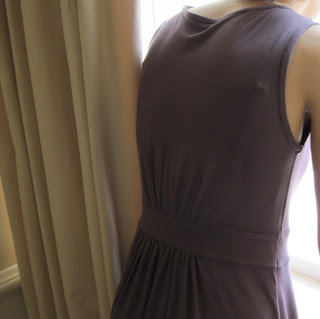 The dress is identical to look at from the back, save for a higher neckline. It was fairly stress-free to make, although if I was tackling it again I would make it with a bodice facing, rather than binding at the arms and neck as I think a facing would give a simpler, cleaner finish. But as I didn't make a toile for this dress I felt it left my options more open to change if I bound the openings at the end of construction, rather than committing to a particular neckline by facing it at the start. In the wrong fabric, so much gathering at the waist can cause one to look pregnant, but happily this fabric is so fluid and fine that I think (or hope!) it navigates around the problem completely.

Nina (who I think of as 'just knowing stuff', and is the source of so many interesting new things to me, so it's amazing that in this instance she was asking my opinion) asked after this post if I thought this particular fabric would be suitable for making a Miz Mozelle and I'd say absolutely - I think it would look fantastic and you can get a good idea from how behaves in this dress as to the drape and hand of the fabric. Oh, and there was no need for lining - I found it to be fine with just a single layer. For an absolute beginner (because I know a few were thinking of making a Miz Mozelle as a first attempt at working with knits...or even garment making), I'm surprisingly myself by thinking that the Liberty silk stretch satin fabric that I used for the Miz Mozelle may be slightly easier to handle as it only stretches when pulled at, whereas this fabric is intended to have more give in it - it's a true stretch knit. However, for anyone other than a beginner, I think it's much of a muchness (an expression that confused my little boy no end when I said it to him recently, but which he now, adorably, incorporates into his own conversation) as they're both delicious to sew with and to wear.

In other excitement, did I tell you that last week, having had an unopened pressing cloth in my drawer for three years, I finally opened it? I'm not sure that I will ever be able to go back to ironing without one...it's amazing. So much so, that during my haphazard bag packing for the weekend I decided that, as well as the five pairs of shoes, my pressing cloth would also be essential. And I used it too. Even if the wearer of the just-ironed-with-pressing-cloth shirt then decided that the shirt choices he had packed could all be dispensed with as he'd be happier wearing a t-shirt under his suit jacket to the wedding we were about to go to*. More on all things wedding later in the week...I'm currently saving and sorting all the details in my head first. It was delicious. Heart-warming. Like a bowl of ice cream with hot chocolate sauce drizzled over it...only better.

* The blatant non-use of carefully packed items officially means that my bag packing was more efficient, despite the disbelief at the high shoe content! A rare and most pleasing occurrence. Hurrah!
Email Post