The top in the mirror 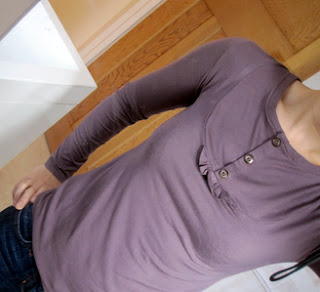 Let us pretend for a moment that my mirror is not covered in flecks of toothpaste dispensed during my children's enthusiastic tooth brushing this morning and focus instead on the top in the background. You might remember that I made a dress from this fabric during the summer. It's a bamboo stretch knit fabric that Ray-Stitch very kindly sent me. I'd thought during August that it was the perfect summer-weight jersey - it's light and slips through your fingers in a lovely, drapey way. However, when I tried the finished top on yesterday (a rather chilly September day) I was delighted to find that, used for this closer-fitting garment, it has transformed into something that feels quite snugly and cosy without any unwanted bulk. 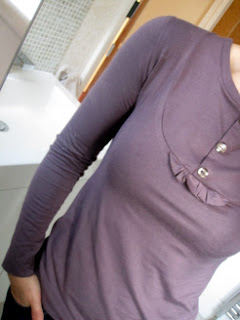 If you also recall that this top looks startlingly like another that I made nearly two years ago, then I'd say that you have a memory like a stealthy fox, but for everyone else, I used this pattern that I drafted with the help of Cal's book and it's based on one of my favourite tops from Gap...although that top doesn't have the weird ruffly bit...that's from my very own imagination! (Looking at these photos I'm not sure whether that should be encouraged or stifled). 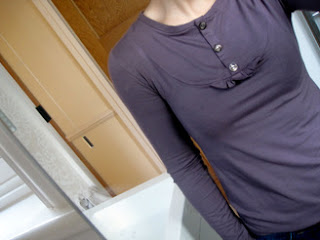 While I like this top I don't feel that my pattern for it is yet perfect - it still needs some work as there's some odd pulling going on at the shoulders (it's not especially visible in these photos) that I need to try and remedy, but I have a plan for that. Also I could practice my pattern grading skills by scaling my pattern up to accommodate the all-over body size increase that seems to have occurred since I first drafted it. Or I could just do some exercise...I'm not sure which is the more tiring option. I have actually been doing some kick boxing-taekwondo practice of sorts, but when I demonstrated a particularly complex sequence of moves for some friends a few weekends ago they were left almost crying with laughter. Apparently I'm missing some of the fundamental elements to carry this off...such as aggression or even an ability to screw my fingers up into a proper fist (It was a revelation at 34 to learn that one doesn't attempt to make impact - feigned or otherwise - with the middle of one's clenched fingers, but rather the knuckles).

This top took only an hour or two to sew together as jersey fabrics tend to lend themselves well to speed sewing. Soon after I'd finished sewing I saw a really super tutorial for sewing knit (that's stretch and jersey too) fabrics on a regular sewing machine. I tend to use an overlocker for dressmaking, but I love reading in depth geekiness like this - it's full of wonderful tips and tricks and is well worth reading.

I would love to end this post by saying that I'm off to polish the toothpasty mirror...but that wouldn't be true. I'm actually going to bed.