The makings of a silk and velvet throw 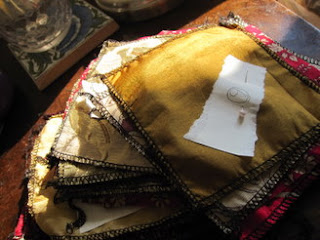 This is one of those projects that took me by suprise and found me beginning to cut fabric in something of a frenzy at too late an hour and without enough thought...but at least I've been spared from being the sounding board to my own indecision (do you ever wish you could run away from your own head?). For those that have been following the red wine posts of late, then you'll be able to guess which room this throw is destined for and also understand that its creation has been born out of the same where-did-that-come-from wild streak that has left me feeling a little confused.

When we sat down one evening and started chatting I realised that while our newly reddened room felt more cosy visually, it didn't feel so cosy in the way of actual comfort and warmth - it was missing a blanket. However, I wasn't entirely convinced that I wanted a blanket made from quilting cotton for that room - I'm realising that I think I love texture and drape possibly even more than colour and print. 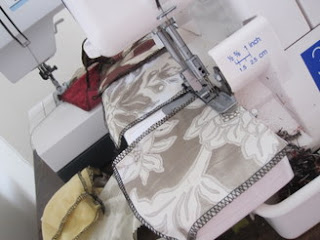 When I went and looked through my fabric drawers, however, I realised that I had many oddments of upholstery weight golds and creams left over from cushions and doorstops that I've made in the past. And there were even a few small swatches of red amongst them. The textures of these materials really delight me - silks and velvets: cosy, strokeable, tactile fabrics. I also found some beautiful Liberty Tana Lawn that a friend's mother had kindly given to me several years ago, as well as some beautiful pale yellow Liberty silk that I'd squirrelled away ever since Diana generously sent it to me last year. 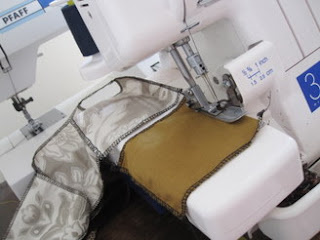 However, I haven't worked with silk often and certainly not in the form of a quilt. I worried over the 1/4" seams unravelling and so after I'd cut all my squares, I then overlocked the edge of every single one of them (excluding the lawn) chain-overlocking them in the same way that you might chain-piece squares together on a sewing machine. It was quick and only took an hour or so, but for several reasons I now wish that I'd interfaced them with an ultrasoft fusible Vilene instead. Firstly, overlocking led to the squares becoming very slightly different sizes, which is rather disasterous and dashes any hopes of the points matching up when they come to be pieced together. Secondly, the silks ideally need a little more stabilising in the context of this quilt and its different weights of fabric where the whispery thin silks and the thick, sumptuous velvets fight against one another and, again, work to make the quilt less easy to piece together neatly. Consequently, this has to be technically the worst quilt (or throw in this case) that I've ever made. I'm unsure if a single point meets up and if it does it will probably stand out like a sore thumb looking overly structured in this hotchpotch of inaccuracy.

I'll show you the finished throw tomorrow...I am guessing that you may be on the edge of your seats in anticpiaton of seeing this piece of quilted imperfection. But you will just have to be patient and wait. I should say that, oddly, I actually love it in spite of (or alarmingly perhaps even because of) its many faults.