A finished quilt and some random thoughts 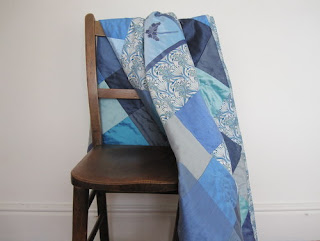 You know that strange feeling when you walk back into your house after arriving home from holiday and it feels strangely chilled and unlived in? Sometimes it can feel like that when you arrive at your blog to begin writing when you've not been there very much (although the lovely comments that have arrived in between times make me feel as though someone has been keeping it warm, even if it's not me - thank you!).

The last month has been almost solid work (including weekends) and blogging has taken an unwelcome backseat. The lovely old cherry wood chair that I sit on at my sewing machine has a hole in the wicker seat that I haven't had time to fix and I've now been sewing perched on the edge of the chair frame for over three weeks. I'm actually going to inherit the chair above from my daughter's desk soon, but first I have to sand and wax the chapel chair that I have waiting in the garage as a replacement for her. I am so looking forward to finding the time to do this. The other thing that hasn't happened was making the advent calendar - the pieces are still all cut up waiting to be sewn and I don't think that will be finished until January now...I was so excited about what I was going to fill it with that I'm now thinking I may have to think of something that can be counted down to in January. Actually, just writing that has given me an idea for something that I know I definitely will make in January. Hurrah! I love it when inspiration strikes like that. All week I've been using an orange pencil that my friend Jenny bought for me that is embossed with the words: 'all good ideas arrive by chance', and now I'm in total agreement). 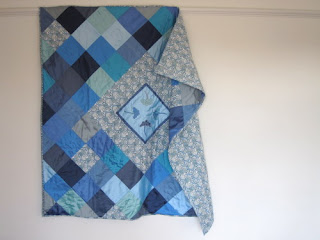 In between other things though, my mother's quilt has finally been quilted and bound and eventually found its way up on to the picture rail to be photographed. I have only just discovered the wonder that is the picture rail when it comes to displaying things - you can temporarily stick pins into the wood right at the back, without this activity ever being visible and it's a fantastic way to view something mid-sewing to see what is and isn't working. 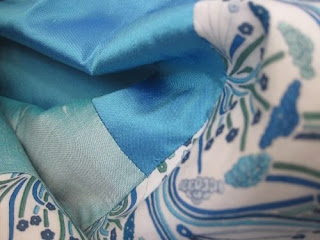 This silk was a real delight to work with. It came from The Silk Route stand at the K&S show at Alexandra Palace and for the most part is Indian silk dupion. It is, I think I may have said before, mixed with some Liberty tana lawn bought at the same show from the Fabrics Galore stand. 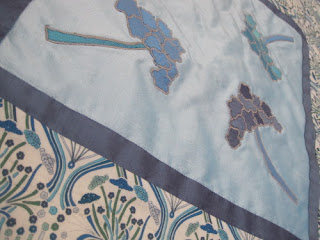 It's not at all the quilt I'd imagined it would be - the Liberty print was only ever intended for the back, but I found that I hadn't bought quite enough silk and so it was introduced to the front of the quilt, which then lead to the flower head appliques in the centre and it being hand-quilted with flower silhouettes. I feel apprehensive now as to whether my mother will love it when she's already fallen in love with the simplicity of the quilt I made using Katy's Kona Radiance bundle (I took the quilt on holiday with us in October and she admired it covetously at every opportunity - at the time I was secretly delighted as I thought her quilt would end up being very similar...now I just feel worried. I know that she'll love it because I've made it especially for her, but I wanted her to also love it because it was a quilt that she'd adore irrespective of who'd made it). And finally, a quilt patch: 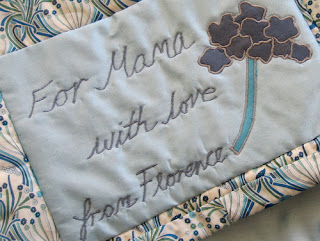 These are the other random things that spring to mind as things that need saying:
I'd love to hear if you have any of your own random thoughts to share,