On clothing patterns waiting to be sewn... 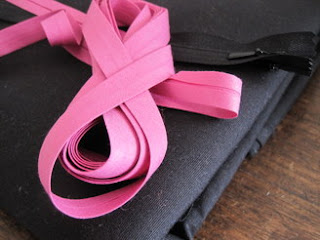 These are the supplies I've been gathering to make a pair of Clover trousers. It's odd though: when it comes to clothing I think that my main reference points seem to come from overseas through many of the blogs that I read...so in my head this garment is rapidly becoming 'pants' and not 'trousers'. I'm being curiously de-anglicised without even leaving the country...or even my desk.

I've chosen some thick black 100% cotton chino fabric - a 'chino' makes me think of men walking the smart-casual line at weekend gatherings wearing shirts very neatly tucked in....we'll have to see if the outcome is determined by the fabric name or vice-versa. I'm hoping for the latter. The pattern says that a fabric with 3% stretch is preferable, but then Sarai made these beauties, which she told me had very little stretch in them...so I'm hoping it will end happily. Or I could be the girl bursting the seams of her chino pants as she sits down at a weekend gathering. Don't worry - if there's a risk, I'll wear these as Standing Pants Only. (My lovely mother - thank you, Mama! - bought me this pattern as a Christmas gift from here, for those looking for a stockist on English shores). 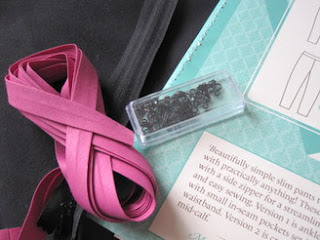 There was much blogging silence last week and I was left looking like a human petal for far longer than I would have wished - we were waiting for an engineer to come and make our internet work for more than a few minutes at a time and while I waited I threw myself into some more dressmaking (although I was diverted from re-drafting the petal collar by making a skirt that demanded a place in my wardrobe immediately) - it's amazing how much you can achieve when the internet isn't available. I'll show you it later in the week when I've finished the top that I'm working on.

So for the moment I have several clothing patterns lined up in my head to be worked on...I'm imagining them in a holding pattern circling London waiting to land from the sky like a delayed aeroplane. The Clover trousers could be up there for some time, but I'm so looking forward to getting started on them.

Added to the holding pattern only this morning, is the much coveted Tova top by Wiksten. Yes, almost too exciting! I've never been able to justify the cost and postage from overseas involved in owning this pattern, but, what luck, Jenny has now released it as a downloadable PDF pattern! If you've fallen in love with it too then you can now buy a copy here. (Thank you so much to Kerry for letting me know about it).