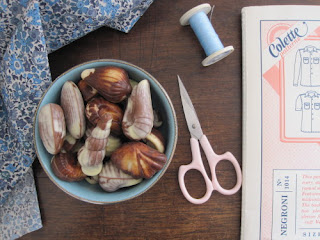 We've had a very lovely four-day Easter break. It has involved reading stories, playing board games and watching films. And yes, eating chocolate. Even while sewing. In the evenings I began work on another Negroni shirt (a Colette Pattern) for my husband. He has worn the last one that I made for him with such frequency that I feel more than a little guilty that it's taken me over a year to find the time to make another one for him when he has proved so gratifying a recipient to sew for. 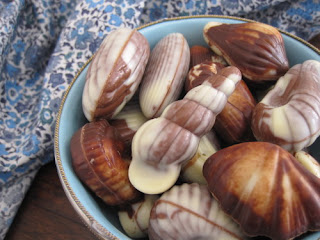 I chose the blue floral Liberty print especially for making this shirt last month on a pilgrimage to South London's Fabrics Galore - I adore that shop - it will be an altogether more summery and lighter-weight version than the last, which, when I made it last January was created with cooler weather in mind.

The eagle-eyed amongst you will note from the pictures that the particular variety of chocolate on display is the highly-mottled, glossy-bodied Guylian seashell. Despite leaving it dangerously late and risking all sorts of dreadful repercussions, my husband did indeed manage to secure me my much-coveted Guylian Easter egg as per my last post. However, not wanting to leave anything to chance, my sister posted me two boxes of seashells as a precaution. It has been wonderful to be armed with such copious amounts of chocolate and if I were to see a long lost auntie at this current moment she may exclaim at how much I'd grown! I would kiss her powdery cheek and offer her my own hamstery one to kiss in return. However, I've happily been able to file away my chocolate consumption under the heading of charity work - did you know that with every box of Guylian seashells you buy you are saving seahorses as a percentage of the profits goes to the Seahorse Trust?

If you're interested in a less calorific way to give to charity, then do take a trip over to Lynne's blog, Lily's Quilts. Lynne is inspiring anyone who's capable of sewing together a quilt to become involved in a wonderful scheme to help give some lasting warmth (literal and metaphorical) to the siblings of families that have been separated. To crudely precis (so do go and read Lynne's more in depth post where she does a much better job of explaining), a charity named Siblings Together do a wonderful job in temporarily reuniting siblings who have been separated by being placed in care, for a short summer break. Siblings Together and Lynne had the idea that it may be a great source of comfort to give these children something tangible to take away with them at the end of their temporary reunion. And what better thing than a quilt, which gives physical warmth and comfort at a time when the child may feel that life is lacking these things in every other sense. 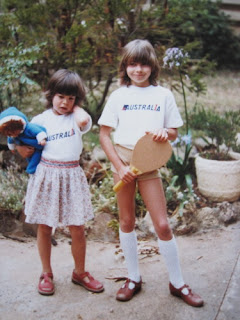 I'm very lucky that, like most siblings, my own sister was by my side for the entirety of our childhoods and regular readers will know from how frequently and fondly I talk of her here on my blog, quite what a big part in my life she is. When I read Lynne's words, I tried to imagine a little of the effect that being separated from one's siblings in traumatic circumstances may have and I was reminded how, as small children, my sister and I were moved to the other side of the world to begin a new life in Australia when my father's company asked him to move there. We went as a family, my sister and I wearing newly purchased matching outfits for the aeroplane journey with our parents doing everything they could to make the transition an easy one. Below is my half of the matching outfit - it consisted of a jumper and miniskirt - mine was red with yellow stitching, my sister's green with blue stitching. Seeing photos of the outfit still gives me the feeling of the nervous butterflies which were there the first time I wore it - I think this photo was taken a few years later - the one that shows us standing together at the airport isn't in my collection. 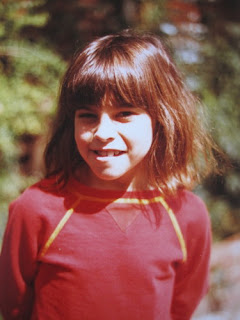 However, when, after a few days at our new school, the headmistress realised that my sister and I were playing with one another at break times, rather than with the other children, we were forced to use separate areas of the playground, which was a source of distress to both of us and we returned home to our mother in a snivelling heap of disintegrating tissue on the day that we were told we were no longer allowed to play or speak to one another during school hours - it felt as though my life jacket were being torn away and as though I were being left to drown. So it is both easy and also impossible for me to truly imagine quite how these children may feel to be separated from their sibling on a more permanent and geographically-wider level and without the backdrop of caring parents to soften the edges and provide stability and warmth. It actually hurts my head trying to comprehend that level of instability. For this reason I feel compelled to broaden my charitable activities beyond the confines of eating Guylian chocolates and to donate a quilt to Siblings Together. Thanks so much to Lynne for masterminding this. More details can be found here if you'd like to join her in some quilt-making.

Ps. And if you haven't made a quilt before, but would like to give it a try, you can find a free tutorial as to how to make one here.
Email Post