Pyjamas for bear: with foxes 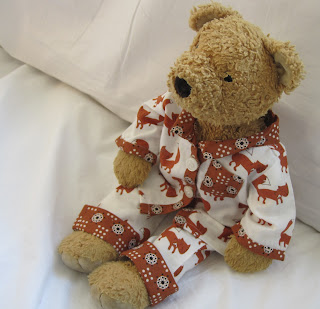 With my children on half-term I'd actually intended to have a sewingless week, so it's a surprise to end today with my little boy's bear wearing a new pair of handmade pyjamas...but that's what happens when the postman arrives with unexpected fabric in his satchel and your children witness the opening of it. Annie, of the lovely Village Haberdashery knows of my love of foxy fabric and very kindly sent me a surprise cut of bushy-tailed goodness when Aneela Hooey's foxes came back in stock at her shop this week. I feel incredibly lucky - thank you so much for thinking of me, Annie! 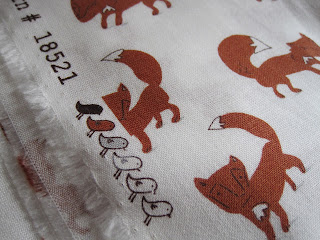 The fabric is gorgeous and this print seems perfect for boys especially (some of the other prints have a more overtly girly feel to them). It has a very lovely selvedge on it too (see the above photo). We all oohed and ahhed over the contents of the unexpected package and my little boy put in a request for some pyjamas for his bear. I was more than happy with this usage, as we'd spent the morning playing Trivial Pursuit and I'd sat opposite his bear whose trousers (I've just read that we made these when my little boy was three! How has that happened), disturbingly, looked to be garroting him around the waist and I had fleetingly thought that at some point he really ought to be re-outfitted to give him a more comfortable look around his ample girth.

So after a late lunch, I set to work drafting a pattern, taking note of my little boy's requests for buttons and some sort of collar and adding in my own design features such as a top pocket and contrasting fabric turn ups. I found that Denyse Schimdt's Sputnik print from the discontinued Katie Jump Rope range is a very pleasing match indeed for Aneela's foxes and so it was used for all trims and features. I had forgotten quite how fiddly it is working on bear clothes though - trying to attach the sleeve bindings on my machine was particularly enjoyable. 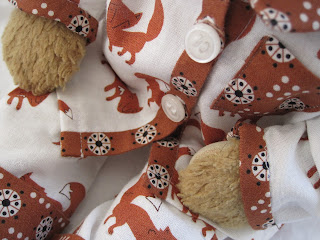 By bedtime the bear was newly wardrobed in his pyjamas and his owner was utterly delighted. His owner's sister was openly envious and has put in an urgent request for a set in Liberty print for her own bear (although however urgent this may feel, this may have to wait a little for I feel slightly traumatised by working on such a small scale with the pressure of beady eyes watching me asking to see my work at every stage). 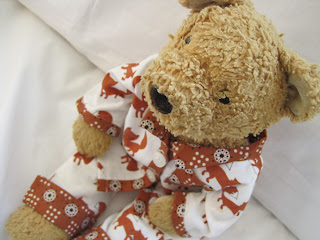 Bear's sleepwear is not a perfect match for his sleeping bag (pattern here)...but it is pleasing enough that it will not require an overhaul. 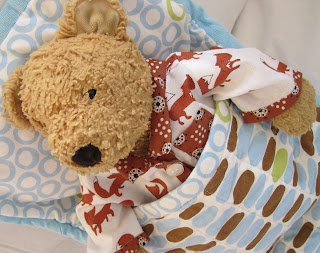 This evening we have picked up When Hitler Stole Pink Rabbit

once more, after neglecting it for a month or so. We read a substantial amount at bedtime tonight - it is the most wonderful book - touching and surprisingly funny in parts, mostly focusing on the little girl, Anna's, own small world as a refugee rather than the atrocities in Hitler's Germany from which she and her family had fled - I can't recommend it enough (and I know when I mentioned it a few months ago, that many of you have loved it since your own childhood too, so it comes with reader endorsement too!), although the listeners in our house have not been entirely dry-eyed and at times have requested that I skim over some bits that they found too painful and shocking to listen to, so I'd suggest it's one that's best to have read aloud, rather than one for a child to read alone. 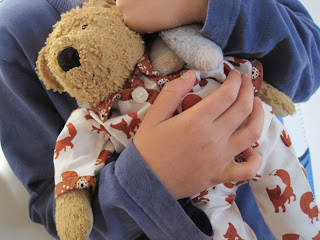 Thanks so much to Annie for inadvertently changing the course of our day and providing the sudden impetus to create new clothing for the bears. The fox fabric is glorious and I would highly recommend it for all small creatures: bear or human. It did occur to me that the fabric would actually make super pyjamas for a child too if you have one that likes to wear cotton, rather than jersey. From memory, I think that there are several lovely looking patterns for children's pyjamas in this book

by Emma Hardy. I've never actually used any of the patterns in the book myself, but I lent it to a friend who found the patterns to be so wonderful that she bought me a new copy and kept the loaned one so that she could rumple the pattern papers with wilder abandon.
Florence x
Email Post