A Fox Hollow give away 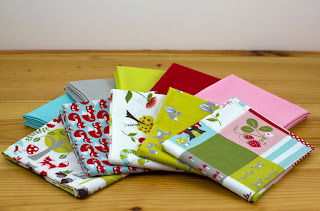 Several years ago my sister's boyfriend at that time delightedly told me, while defending his brand of jumper, that Marks and Spencer were synonymous with good quality. For some reason this comment stuck in my mind and every time I go into a branch of Marks and Spencer I think of him and am sure to take time to stop and admire the fine quality of their double chocolate eclairs, amongst other things. It would seem that I, Florence, have also finally found my own level of synonymity...with the fox! Although unfortunately I think it's limited to my use of and frequent lustings over fox-dotted sewing fabric, rather than my own foxiness. Damn.

When Annie recently took delivery of a skulk of foxes* at the Village Haberdashery, I was delighted that she immediately thought of me. And you. Annie has kindly allowed me to give away this beautiful selection of new fabrics from Monaluna's new Fox Hollow fabric line and she has carefully chosen some Kona solids to go with them too. 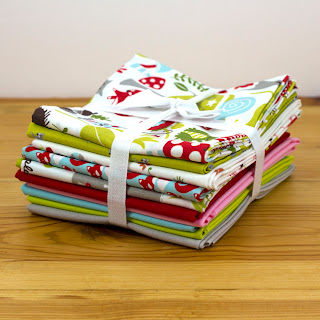 Fox hollow includes a recoloured print of the much-loved fox print from the Anika range (I used it on the tiniest size of my Three Bears' Sleeping Bag pattern, which you can see pictured at the end of this post), but other than that the prints are all new and I love the introduction of a more subtly coloured grey fox. 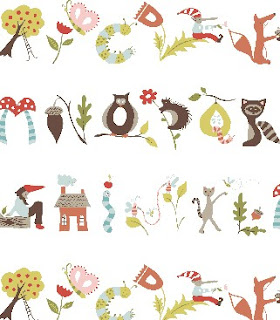 But actually the print that I love most of all in this range includes only a small helping of fox. I am utterly, ridiculously, giddy-chestedly - that's on the inside, near my heart, not some peculiarly jaunty movement on the outside (that feels worth clarifying) - in love with this alphabet print named 'A is for Apple'. I love the way that the woodland animals and foliage spell out the alphabet. Look at the way the letter B is formed from butterfly wings and the M comes from two leaning red mushrooms! I can think of so many uses for this fabric. Not only would it look fantastic in a frame, but I think it would be wonderful to cut out some of the letters and applique them into picture or wall hanging to spell out a child's name.

Anyway, after making a claim as audacious as being synonymous with the fox, I feel compelled to share a small smattering of supporting evidence to defend my synonimity, just in case you have been left thinking: Florence...fox....why? 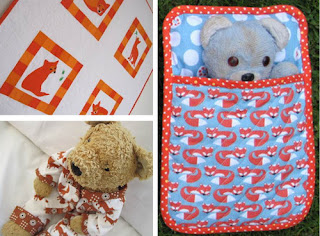 But I have noted whenever I've mentioned the fox that others seem equally enthused...so here is your chance to add to your own portfolio of fox-themed sewing. To enter, just leave a comment beneath this post telling me what creature you are most like (people saying they're highly fox-like will not gain double entries, so you may speak freely without harming your chances of winning). Animals can be ascribed on the basis of looks, characteristics or behaviour. We often discuss which animal we most embody when assembled around a dinner table with family or friends. My own family members include at times a slow loris, a lion, a Dalmatian, and an otter amongst others. It may be of interest that I am not a fox at all, but a white duck.

On this occasion the foxes must go to a home in Europe or the UK due to quarantine (and postal) issues. Sorry to my lovely internationalers. I'll announce a winner later in the week and Annie will be in charge of posting the fabric bundle to you. As this fabric range is wonderfully unisex, Annie has agreed that she's very happy to swap over the pink solid within the give-away bundle if the winner will be sewing for a boy.

* I had to look up on Google what the collective noun for a group of foxes might be. Finding out that it's a 'skulk' very nearly sent me into delight overload. I love the term 'to skulk' and even more so 'skulking'. The appeal of the fox just gets greater and greater.
Email Post