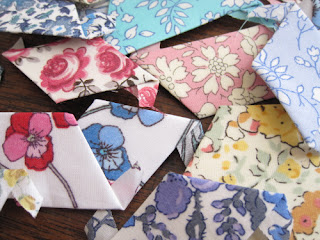 This week I have been sewing multiple pairs of trousers (all will be explained later), piecing together my Charlotte Bartlett snowball quilt and watching films. I don't watch films very often, but the sewing involved in the snowball quilt has been so dull that it was the only way I could think of to make it bearable. I hadn't known it was possible to be bored and to be sewing at the same time, so it's come as something of a horrifying revelation to me.

Filmwise, I began with the slightly trashy but very amusing Drew Barrymore rom-com, Going the Distance. It was ridiculous, but lifted me out of the ditch I'd found myself in mentally after two hours of snowballing. I then moved onto A.S Byatt's Possession (utterly wonderful - I'd heartily recommend you seek a copy out) and later, when my husband and son went out to a football meeting, my daughter and I decided to watch a two-disc version of Pride and Prejudice at which point I changed to some hand-piecing, as I didn't think she'd enjoy it quite so much if I was only half-watching the screen while thundering away on my sewing machine. The snowball quilt is still a long way from being finished, I have more pairs of trousers to make and the hand-piecing is ongoing...so it's feeling strangely groundhogish where I find myself doing the same thing over and over again. Luckily, the DVD accompaniment is endless and free of charge. My father's office at my parents' house is warren style with self-made walls of precariously balanced DVDs and dusty, old books. The sight on opening the door defies belief and one can be happily lost in there for hours, knelt on the floorboards of a mad professor's version of Blockbuster that smells comfortingly of furniture polish...I believe there is currently suitable accompaniment for me to make snowball quilts all day every day until I'm 192. His library is diverse, for he snaffles up bargains to delight every single one of us and each and every viewing mood that you might find yourself in. 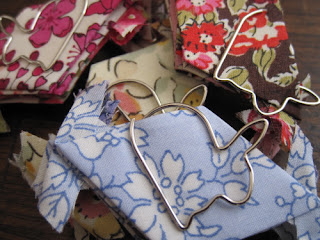 Don't you just love the little rabbit paper clips above? I use them to hold together the groups of glue-basted diamonds that are awaiting being sewn up into stars. They are actually my daughter's and once again I was delighted by the stationery she has neatly stashed away and that she is willing to share with me. Although unlike my father, she hoards very little: on Sunday my husband and I returned early from a long weekend away to secretly paint her room for her - as we removed the furniture, we couldn't believe the reality of quite how sparsely she chooses to live. Aside from clothing, she has three small desk drawers filled with treasures, a very full bookshelf and a few files of paper...and nothing else. I aspire and fail to live like she does.

My paper-pieced quilt is undergoing something a serious U-turn, instigated by my husband who has his own ideas about quilt design (which are actually somehow far more advanced and visionary - damn him! - than my own, so I've actually been happy to listen to his advice about colour and shape, because I can see that he's right). I'll discuss that with you in another post, but for now will leave you with more gratuitous photos of my Liberty covered paper pieces...just because they look so delicious. 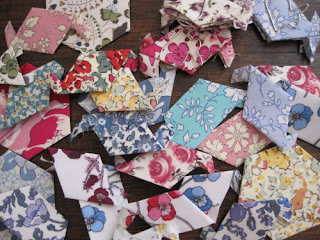 There is only a week or so until the summer holidays begin. I have in my head a list of things I'd love to have finished by that time...I'm unsure if it's humanly possible though. What are you up to this week?
Florence x﻿
﻿
Email Post