A bag for my daughter 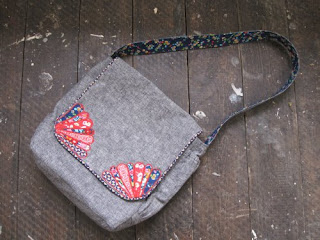 I took this photo just a few hours before a new carpet was laid in my daughter's room. The man who we bought our house from was a perfectionist: every time he painted a room he took up all the carpet so he wouldn't ruin them with splashes of paint. We wish he hadn't as the boards would have been stunning. The carpets he left we loved less and over the last five years we have replaced all but the claret-coloured beast that still covers our own bedroom floor. I've become so allergic to everything recently that we're considering taking this up altogether and seeing if the boards beneath are salvageable. Has anyone tried this and found that sleeping in a carpetless room has cured their indoor allergies? 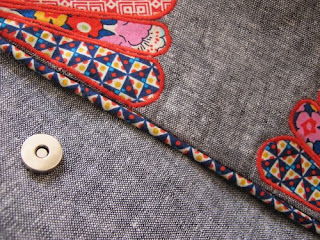 For a long time now my daughter has been asking if I'd make a bag for her. It always amazes me slightly that she wants to wear and use the things I make - not because I have any esteem issues around these things, but more because as a child myself I was very ready to disassociate myself from anything to do with my parents and to set about defining my own identity, so I'm incredibly touched that she doesn't feel this way. I was a strumpetty, wilful sort of child though, where my daughter is just about one of the sweetest people I've ever met, who maybe feels the need to assert her independence less: she just is who she is. Perhaps that's the difference. Interestingly, this was the first year that my little boy requested a shop-bought pencil case for school. Over the holidays he tentatively said: I think I might just try one this year and then maybe next year have one made by you again' - I appreciated that he was trying to soften the blow for me so kindly and so tried very hard not to let any amusement show on my face. I loved seeing what he chose when left to his own devices and was quite surprised that we'd made it as far as 8 years old before he felt less happy to embrace the idea of a homemade pencil case.

When it came to the bag I asked for input on fabrics even though it was intended to be given as a birthday gift, as I didn't want to make my daughter one which she secretly loathed but felt obliged to use. Katy's cushion (which I frequently return to drool over in a semi-stalkery way) happened to be on my screen when we began our search and she instantly pointed to the photo and said that those were exactly the kind of fabrics she'd love for her bag. Initially, I was going to create one central round Dresden plate in the centre of the flap, but I realised that I probably wouldn't wear anything myself with such overt decoration and my daughter is also a creature with minimalist tastes, so quarter plates peeping in from the corners seemed a more reserved use of colour. If you don't recognise the fabric already, the Dresdens are made from Liberty's Bloomsbury prints. They're all from the Rich Red/Blue colourway, which are being stocked at Patch (you can find other colourways now in stock here, here and here), while the rest of the bag is sewn from Robert Kaufman's Essex yarn dyed linen. 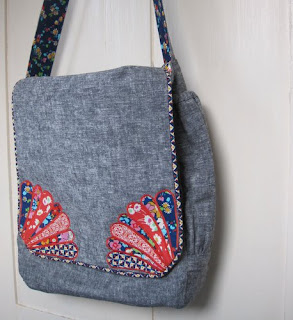 I've been wanting to make something from this linen/cotton mix for a while and when it arrived it was even more wonderful than I'd imagined. My thoughts instantly turned to dressmaking as it has the loveliest drape and is incredibly soft. I can imagine a Negroni shirt for my husband or perhaps a smock top for me. It would be perfect for winter clothing as the fabric has a cosiness and warmth to it. It's available in a choice of three colours (black, blue and flax, all from the lovely Eternal Maker), which are all feel exactly right (I sent for colour swatches of the other two) and as though if it has to come in such a limited colour range, then at least it's one that covers all bases. 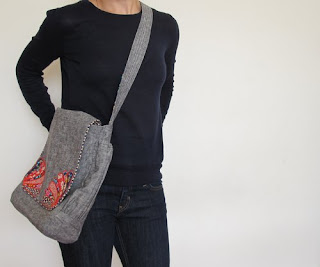 She requested that she could wear the bag across her body (it comes up a bit short on me in this photo), that it not be overwhelming large, but still big enough to fit her lunch box and books in and also that it have several different kind of pocket within the lining. It also has an exterior pocket for her drink. We've found that the messenger bags available in the shops can sometimes be lacking in elegance, so we decided on rounded corners, gentle gathers and contrast piping to try and soften the edges of this utilitarian style of bag. 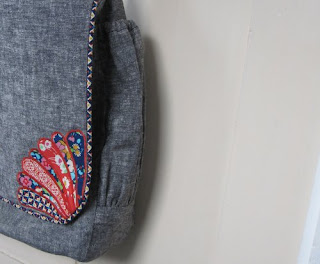 Inside are more zippered pockets and divided compartments than a girl could find uses for. I made this bag last Sunday while it poured with rain all day. My husband read Micheal Morpurgo's wonderful Long Way Home

to us while I sewed and the children lolloped around. In one of his reading breaks my children discussed bag interiors and my little boy came up with the idea of secret zippered pocket within a zippered pocket. I thought this idea was adorable, and so secretly set about making his bonkers idea a reality and my daughter was delighted by it when she discovered it on her birthday morning. 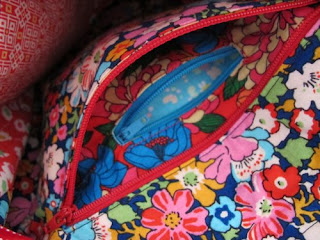 I'll save showing you the rest of the details as I'm currently writing the bag up as a pattern as I really enjoyed making it. The pattern possibly won't include the quarter Dresden plates as I'm guessing they may be an acquired taste, but it will hopefully include everything else.