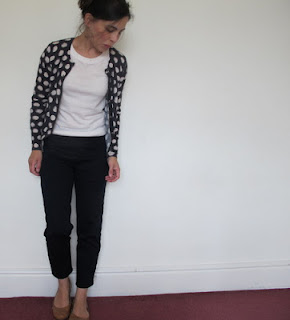 I actually made these trousers in the week before the summer holidays began, but somehow I didn't end up finding time to write about them until now. I suspected Colette's Clover pants would be wonderful as their patterns always seems to be perfectly cut for my more curvy bottom half, but somehow it's taken months to finish a pair that I'm happy with. These were the fourth pair I'd made and they are finally a Clover of the four-leafed variety. The first I made in a black non-stretch fabric several months ago - they were a super fit in the early spring before it was warm enough to actually wear them but, unlike most people, I tend to eat more in the summer than the winter and so by the time the temperature warmed up I realised I would welcome the stretch that the pattern suggests is necessary in the fabric requirements.

The second pair was much more successful in terms of fit, but an unfortunate blueberry shade that I wouldn't actually wear outside the house (or even in it, actually. "Mummy, do you like that colour? It doesn't look like something you'd normally wear". You can see it on the pair of trousers that I made several years ago, which I never actually wore due to the odd colour). However, it the blueberry fabric had the most perfect amount of stretch and a good weight to the fabric and finding an alternative proved elusive. Eventually I settled upon a wool fabric with 2% stretch, which had I had any foresight at all then I would have realised required lining were it not to be insufferably itchy and hot against my skin. Unfortunately, I was not in possession of any foresight, so they remain in a drawer and just looking at them makes me feel insufferably itchy and hot. I try not to look at them. 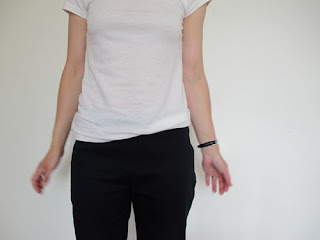 Finally, I spoke to Dylon and asked if I could successfully dye a fabric containing 3% spandex. Surprisingly they said yes, so I bought a few metres more of the hideous blueberry fabric, put it in the washing machine with some dark blue dye and it came out transformed into the most perfect shade of French navy. It's this that I used for the Clover trousers photographed in this post.

I cut the size 0 and with the extra stretch they're really comfortable but, my mother noted, more loosely styled than anything I'd normally wear and next time I'll shave the shaping on the hips away as it makes them stand a little proud of my actual hips in a way that they didn't with the less stretchy fabric. They're a perfect fit on the waist, but more roomy on the leg, even though I've narrowed them on the calf somewhat. I'm not entirely opposed to this - sometimes it's nice and perhaps more flattering to have clothes that feel more forgiving. I've been enjoying wearing them and they were my choice of clothing to travel in when we went to Italy (that's not meant to imply they are trousers for slobbing around in as I've never quite got my head around the mentality of dressing down for plane travel). The side zip and flat front makes these my ideal trouser and I think it would be easy enough to adjust the cut of the leg to make them longer, flared or bootcut. It's a wonderfully versatile pattern. 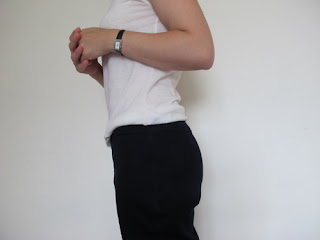 In terms of changes, like all Colette patterns, the instruction is brilliant. The only thing I think is worth noting is that if you leave the 5/8" seam allowance as it is, the zip will be very difficult to pull up and down. It slides along the zip teeth much more smoothly if you trim the seam allowance of the waist band and facing back to 1/4" to reduce the bulk that it has to pass by. 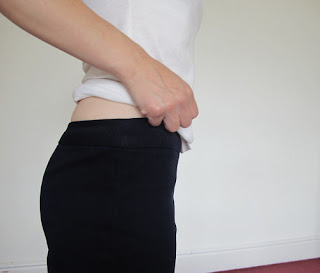 I've seen a few people saying that the cut of these trousers is odd as the back waist band can sit lower than the front. You can see it a little in this photo above, but it's actually quite noticeable. The back isn't actually lower than the front - when you hold the trousers up the back and front waist lines are identical in height and this is what causes the problem - I've looked at nearly every single pair of trousers I own and when I hold them up the back waistline always sits about an inch higher than the front at the centre, no matter what the style of the trouser. Put a bottom that isn't totally flat into a pair of these trousers and it will pull the waistline down at the back, unless your stomach sticks out at the front by an identical amount. I discussed this with my mother one day as I was trying them on and she said that she actually thought it was a rather ingenious design as it eliminates that annoying pouch of excess material that is so often found at the back of the waist on trousers and I think she's right. Indeed, it does fit flat to my back and when I sit down it seems to stay in place, rather than jutting away from my body. So for me, it's something that I quite like, but I'm not entirely sure it looks right visually, however, as I tend to wear clothing that covers the waistband, it's not an issue.

I shortened the trousers to be the same length as some narrow-fitting trousers with turn ups that I love wearing, however, if I was doing this again, then I think I'd find a length that's appropriate to the more tailored, sophisticated styling of these trousers - they're a little too short and make me feel school-boyish at times - just 1/2" longer would make all the difference. 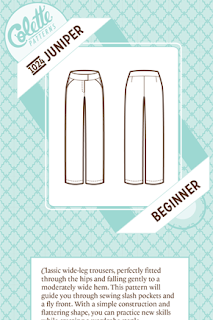 I think autumnal Clover pants in stretch corduroy could be a good thing too. However, last week Colette Patterns released another trouser pattern. It's a wide-legged beauty with gorgeous angled pockets, pictured above. While the line-drawing illustration pictures of Clover showed a level waistline back and front, the Juniper drawing shows a deeper rise at the back, so I'm guessing the pull down issue at the back waist won't be an issue with this pattern. Alice will be stocking the Juniper pattern when it arrives in England, and if you click on her link you can sign up to be told when it arrives.