A design for the rubies 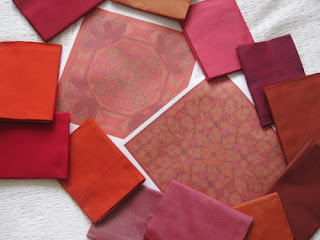 My sewing feels rather like it's been stagnating recently. Not because of any lack of enthusiasm or time spent sewing, but because the projects I've chosen to immerse myself in lately are so time-consuming and long-winded that there isn't a quick end-point to anything. However, the bits that are left for me to do on current projects are mainly either hand-quilting or machine work, which means that a window has finally opened for me to enter into another paper-piecing project to fit into my handbag for out-and-about sewing. I've long wanted to make a wall-hanging: something which I can frame, rather than lie beneath; something intricate, with tiny pieces, which replicates the enjoyment I found in piecing together the Tessellations medallion which ended up in this quilt (still being hand-quilted: too large to fit in my handbag).

Last week I fitted in the time to play around designing a few quilt patterns. Once I'd put together two options which I felt I might be happy with, I scanned in my intended fabrics and dropped them into place. On printing them out, my paper became so saturated by intense colour that the print-outs above are not entirely helpful, but the screen grabs below give a clearer idea. 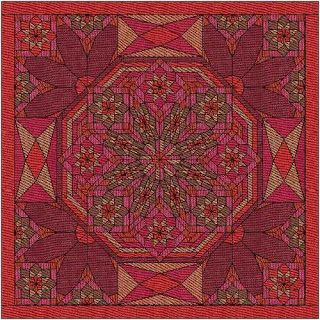 The fabrics I've scanned in for this are some Oakshott Rubies which I picked up at the Quilt Festival over the summer. 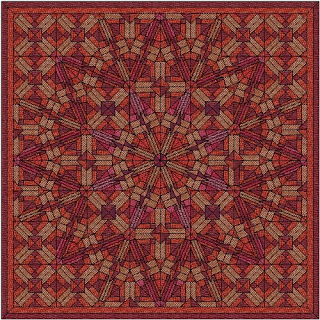 The scanner failed in its attempt to capture the bright iridescence of the fabric and makes them look so heavily woven that they take on a distinctly more earthy hue than they possess in real life, but they are perhaps more successful than the print-outs. I'm quite pleased about that though, as one doesn't want the computer-generated mock-up to be so accurate that it dissolves the impetus to actually make the design up in fabric. 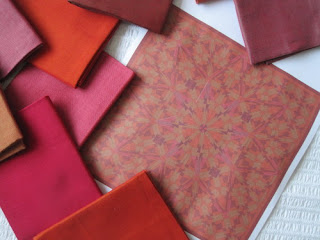 It's only in retrospect that I can see that I may need to go back and simplify whichever design I choose to make, unless I want another project that takes years rather than months to complete. I'm imagining the finished piece may be about 24" x 24" or a little bigger.
Any preferences?
Florence x﻿
﻿
Email Post