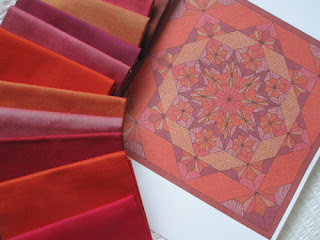 Goodness, thank you so much for saving me from my own self with your comments following my last post. Sometimes I find if I've been working on something for a while it can become so familiar that I no longer actually see it with the benefit of distance. It was entirely helpful that so many of you left comments suggesting the designs for my next paper piecing project that I'd been working on were altogether too crowded. 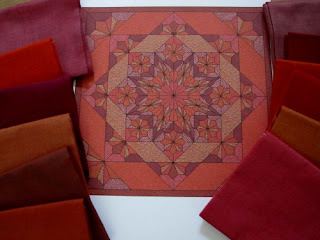 I left the insane star design alone completely and reworked the flower petals, but it ended up not feeling quite right, so I started afresh and kept your words in mind about the need for visual resting points  and came up with the design in this post, which I feel much happier with. I think it retains some of the stained glass window feel (which is something which appeals to me), but is more suited for a small-scale fabric creation, rather than a vast church window. However, I would love your input, as it was so helpful last time. The finished piece would be around 6 times as large as it's shown here, which may add to the space and lessen the feeling of the pieces being quite so tiny (I've never been good at visually increasing scale without sitting down and doing the maths for it, so just in case I've got that wrong, it's intended to sit in a very large frame that will be around 32" x 32" above a fireplace). 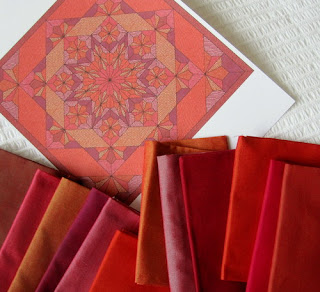 In this last photo I've boosted the colours a little as the natural light today is so gloomy. Although it looks garish, it gives a better idea of how jewel-like the fabrics are. 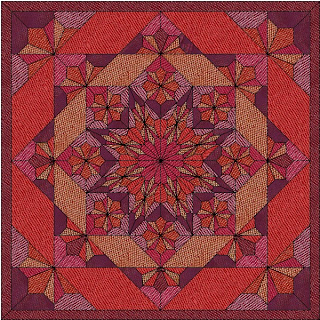 I answered a few questions in the comments to the last post, but just in case you missed my responses, some commenters had asked how one goes about scanning fabrics into a computer.  I scan mine in using the scanner function on my printer, however, if your printer doesn't have that facility then you can visit the fabric manufacturer's website where they will often have sample images which you can download. From there you'll be able to fill shapes in a variety of programmes from Word to PowerPoint to more advanced programmes such as Illustrator and Photoshop. I use Illustrator occasionally, but have tended to feel happiest using PowerPoint to mock up quilt designs - it tends to be viewed as a fairly limited programme, but over the years it's been developed hugely and its drawing tools are now fantastic and mimic many of the features found in more powerful design programmes. As it's so often installed on your machine already due to it being a component of Office for Windows it's a good starting point in deciding whether you're a computer or a pencil-and-paper sort of person when it comes to quilt design. However, for these latest designs I've been using some software called EQ7 which is built specifically for quilt design, and so simplifies many of the tasks, as well as providing you with an extensive library of traditional blocks to call upon and edit. I bought mine here and have been offered wonderful service, however, like all software it is expensive and comes with a learning curve. When I've had a chance to get used to it and explore its possibilities I'll hopefully post more about whether it feels like it's worth the investment.

In the meantime, do you think I'm ready to cut into my fabrics yet?