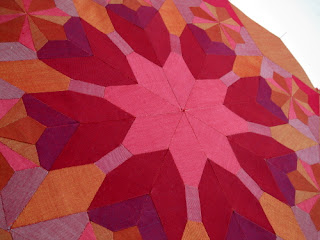 The paper pieced kaleidoscope project has grown substantially over the last week - the moment everything has been done for the day, this is the thing I turn to. As eight o'clock approaches I suspect I become almost as fixated on the moment at which I can thread my needle as others may be about reaching the hour at which they can respectably uncork a bottle of wine (someone once memorably told me that 17.59 was normally an accurate timing of when this happened in her house and ever since I've had an image of her clock-watching as she went about cooking dinner for her children. It's worth clarifying that she was not an alcoholic, just possibly enjoyed that this glass of wine was a tangible thing which signified it was time to relax, just as I find with hand-sewing!). 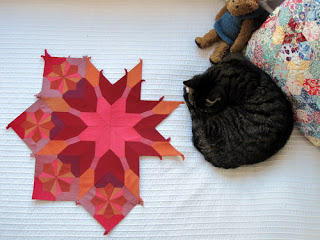 Half way through the week the half-formed piece was substantially larger than our small tabby cat and finally, by the weekend, it had grown to the size of a Labrador puppy if it were curled and strangely hexagonal. 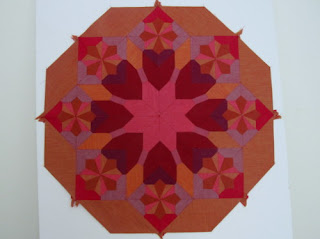 I still have several more rounds to go until it is completed, but finally the kaleidoscopic effect is beginning to emerge and it's this which makes me tingle with excitement. I have become rather obsessed with kaleidoscopes - both the way in which they can be created by rotating patterned fabrics (which this project doesn't allow for) and the way in which they can be formed by tessellating shapes together. I find the techniques involved in the former fascinating and I look at the prints on fabric in a different way now - thinking about their potential to be cut and turned to create new, unique patterns. I remember it wasn't so long ago that I liked very simple quilts which allowed the fabric to do the talking. I don't feel quite this way now - it's difficult to separate out whether this is because my tastes have changed visually or if I'm so drawn to thinking about the creative processes involved in more complex piecing that an appreciation of these has taken precedence over all else. 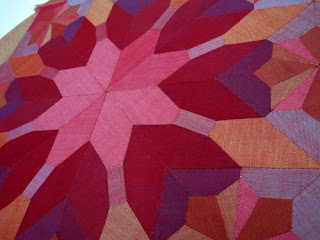 The weave of these fabrics is rather thrilling - because each colour is shot through with red, the colours look a totally different colour depending on what side you view them from. If you focus on the top left side of the heart at the top left of the photo above you can see that one side of the heart looks red while the other looks a bluey-purple. Photographs fail to capture it properly, but this is happening constantly as you shift the angle of the piece slightly; change your own position while viewing it; or if the sun suddenly shines over it. Often it will momentarily look as though I have used the wrong fabric colour for a particular piece, only to move and suddenly a different piece looks mismatched. It tends to look uniform only when viewed from straight on. It's a completely fascinating effect of the fabric. 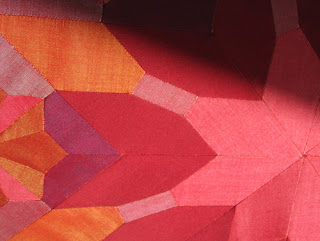 However, the fabric is as frustrating as it is lovely and as many of the tinier pieces are over-handled due to the slow process of piecing by hand it frays maddeningly even when glued to the card beneath. It's worth saying, just in case you're considering using them yourself, I didn't experience any of these problems when using the Oakshotts for a machine pieced quilt where the fabrics were handled less and this isn't stopping me swooning over the new Lipari bundle. However, I think next time I would buy the fabrics individually, rather than as a stack - many of the oranges from the bundle of rubies I bought have gone unused, but I've now run out of the colours from which I'd wanted to form the larger outer rounds...I fear it may come to a halt while I decide how to continue and whether to spend more money replenishing the colours I need or to accept that it will have to be a smaller wall hanging than I'd first intended. I'm even considering mixing in a little of a dark red Liberty print I have as unfortunately Oakshott only sell the individual fabrics in metre lengths, which makes them prohibitively expensive for merely finishing of a project.

I love the blues and greys and blacks from the Lipari range and am considering these for my next project. Recently Cathy has been working on an eye-poppingly beautiful Museum Medallion quilt, which she's been piecing by hand, but without any papers involved. It's a completely different way of sewing to English paper piecing and apparently much quicker, so I'm eager to learn. Cathy kindly sent me some links over the weekend to get me started and I'm now eager to finish this piece so that I can begin experimenting.

If you have a favourite book or tutorial on the type of hand-sewing that I've talked of above, please do let me know - I'd love to hear.