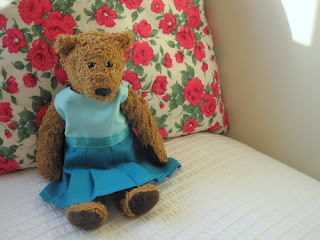 Today I realised that I wouldn't have enough fabric left to complete my mother and father's wall-hanging. Not the best realisation to have on 18th December, but luckily Oakshott kindly agreed to speed some supplies to me and I'm hoping I'll be able to continue with my sewing marathon at some point tomorrow. Once I'd finished hyperventilating, I realised that made today an unexpected free day when I could try to get some of the jobs done which have been piling up while I've been hand-sewing (seemingly at a snail's pace). 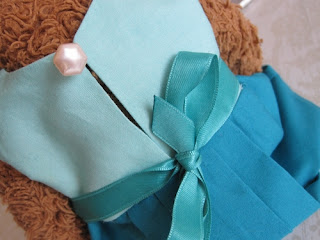 At the end of November my husband put our names in a hat and we all picked one out. We decided that each of us would hand-make one gift for whoever's name we drew and who we were making for would remain a secret until the gift was unwrapped on Christmas Eve. Unfortunately my little boy is the worst secret-keeper I've ever met and he couldn't stop grinning when he picked a name out of the hat and eventually said: I'm just going to burst if I can't tell him I've got him! (as there's only one other 'him' in the family, my husband is now very much looking forward to seeing what he's been made without quite the same element of surprise he'd been hoping for). 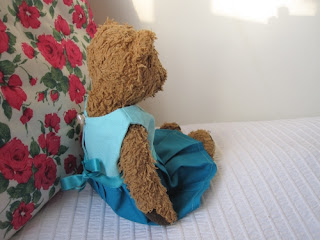 I drew my daughter's name and it's been playing on my mind that it's nearly Christmas and I still haven't made anything for her. So today I ran up a dress for her bear. In the summer her bear seems to wear this dress and in the winter it's normally woollens (this change in uniform is done without ceremony or comment, but clearly my daughter is keeping tabs on Bear's likely body temperature), however, I thought she may like something more formal to wear on Christmas day.

My daughter has never played with dolls, but I noticed recently as I scrolled through my photos en masse in Picasa that without my really being aware of the bear ever being carried around or brought along, the bear appears near my daughter in nearly every indoor photo I've ever taken of her. She is just there - she is not a creature who has been given a large personality that demands attention - in fact she is very much like my daughter (and her cat, who also seems to mostly appear near my daughter): quiet, unassuming and just very sweet. 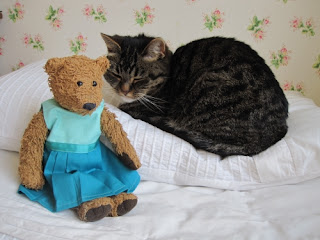 I had been going to make a Liberty print dress in a vein similar to that of the yellow sundress I made last year, but at the last minute I decided that the dress should be more stylish and modern looking. 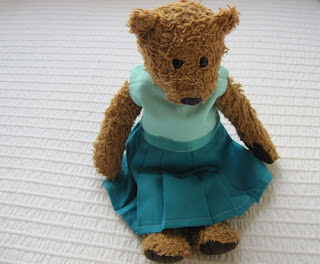 So Bear wears a dress made from a small part of an Art Gallery Fabrics stack of solids that I was given when I met with Pat Bravo earlier in the year. They were lovely to sew with: crisp, supple and with barely any fray - perfect for small pieces. The top half of the dress is fully lined to dispense with any need for binding at the neck and arms. It's been a while since I lined a dress bodice so I referred to Amanda's excellent tutorial intended for garments worn by humans, but just as useful for bear attire. The pattern is my own. In the last week or so I've been feeling increasingly eager to get back to some (full size) dressmaking, not least because I haven't been able to find in the shops either the dress or the skirt that I'd like to be wearing. This miniature has only made the yearning stronger. But there is a wall hanging to be finished first and then a great many other things to be done first.

How are your own Christmas plans coming along?