For my gracious time 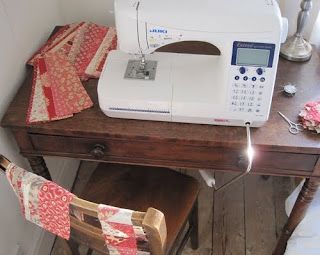 So this was what was under the Christmas tree for me this year. I couldn't quite believe it. Several weeks ago when my mechanical machine had swallowed some thread, I took it in to be repaired and happened to ask if there was a machine that could replicate the look of hand quilting as I had launched into hand-quilting the edge panels of this quilt so densely that I felt desperate to know if there was something in existence that could finish the job for me if my hands fell off. I was shown a wonderful machine which had a hand-quilting stitch (although, no, nothing can replicate the look and feel of hand quilting and it's probably not a feature I'll ever use), but which also had numerous other amazing things, such as an automatic thread cutter and the ability to end a line of stitching with the needle either up or down depending on whether I wanted to pull the fabric away or pivot with the needle still in it. These are all things that don't matter overly if you're using your machine for dressmaking, but suddenly feel highly covetable when you're quilt making and doing short repetitive processes over and over. I've been pondering over these features for the last few years and the desire to experience them has been gradually increasing. I think I've said before, there's a sense of using a wilfully persevering with using a typewriter when everyone else is happily using a computer.
I brought the brochure home, drooled over it for a few days and was teased horribly by my husband as the tag line the manufacturer had chosen for the front of the brochure was 'Juki, for your gracious time'. After my husband saw this, I was never just sewing, but 'having gracious time', whatever that was. Or not, because I didn't actually own a Juki. 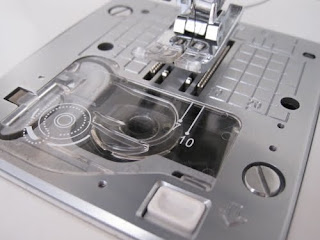 But ownership was actually just a few short weeks away. Although the machine I was looking at then isn't actually the machine my husband chose for me. It transpired that he went to the shop shortly after I'd brought home the brochure and decided to buy the model up as it had better lighting and he'd become aware, due to the operating-theatre-style maze of lights that I'd set up around my sewing desk, that I was having trouble seeing easily when sewing with dark fabrics. He later told me that he'd brought it home and felt quite pleased with it, but kept thinking about the model one step up from the one he'd chosen. 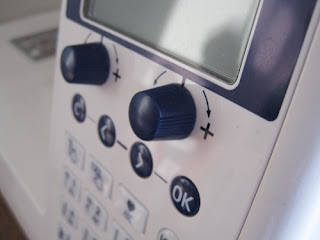 My husband has owned several recording desks in the time I've known him (he's a musician in his spare time) and he's always preferred the ability to slide a fader or turn a knob, rather than press a button, which might feel sleeker and higher-tech, but somehow lacks the intuitive feeling of manually moving something up or down. And so after a week or so, he returned the machine he'd chosen for me and upgraded it for the next model up purely because of its twisty knobs which he thought I'd appreciate (see photo above). The fact that it also has a great many very interesting feet, a huge quilting table attachment and a presser foot that can be lifted up and down by tapping my knee against a lever was incidental to him, but a complete delight to me. I love how my husband thinks these things through and tries to make sense of what I might want by applying it to what he'd like for himself. He was exactly right: the twisty knobs do make all the difference. 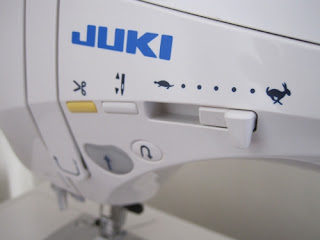 I also quite like that I can either be a tortoise or a hare...I have a tendency for being a hare when I'm machine sewing...a hare that carries a seam ripper.
I was actually too ill over Christmas to use it aside from making a very quick make up bag, which I'll show you another day. I'm still ill (I think that's around Day 19 of Christmas is Cancelled due to Ill Health), but I've begun sewing together some of French General's Rouenneries Deux and Chateaux Rouge in an attempt to finish this quilt and I feel as though I can now safely say that the machine is wonderful and that all those features save not just a lot of time, but a huge amount of thread (the automatic thread cutter means that you don't waste thread as you pull the fabric away from the machine and my machine is unusual in that you don't need to pull the bobbin thread up before you start sewing which saves even more thread)! Lifting the presser foot up and down by knocking a detachable lever with my knee is also a time saver when you're sewing a great many 1.5" long seams. It all feels so quick and streamlined.
It's a very odd shift to make after years of sewing on a completely mechanical machine though. No matter how wonderful and time-saving all those features are I can't help feeling ridiculously cossetted and spoilt by the amount of mundane tasks this sewing machine does for me. I think there's a transition period where one must feel rather like a fallen Luddite who stands redundantly by her new washing machine on its spin cycle feeling guilty for not cranking a mangle.* 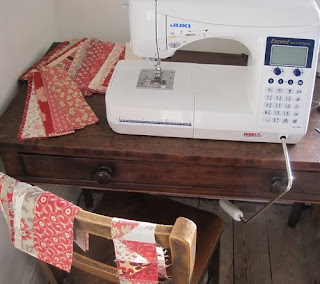 But although it takes some getting used to, when I finally brought it to my desk upstairs and put my old machine in a cupboard I couldn't quite believe how tiny and basic it suddenly looked. It's a similar sensation to that of coming home from holiday and in the first moments when you walk in you see your house as a stranger might, rather than with a familiarity which means you almost don't see it at all. The thing that I love most about my new machine though? Its silence. My old machine was incredibly loud and my husband and children referred to it as 'The Judder'. It made it difficult to listen to the radio and meant my husband had to read stories to us at several decibels above his normal level of speech if I happened to be sewing while he read. This machine is virtually silent even when being driven at full speed. I now feel I could happily sew until 4am undetected. I probably won't do that, but it's nice to know that I could if I needed to.
Florence x
* Jenny, I know you will have thought instantly of Auntie Mabel, but no, she was not in this imagined scene and all attendees were fully clothed with body parts intact.
﻿
Email Post