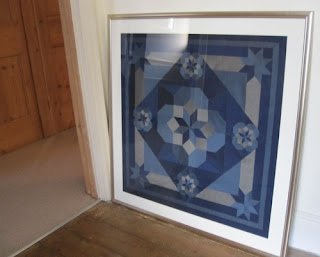 There was some consternation in the comments to my last post that I hadn't chosen to display my face with the description of the offending glasses. While I wouldn't actually mind doing that, I do find it unnerving when occasionally I'm searching on Google images for something sewing related and a picture of myself pops up...it makes you more aware that you probably don't want that photo to be one of you looking like a female Elvis Costello on a distinctly uncool day. However, I'm happy to humiliate myself within the confines of Instagram so if you're eager to see then you can follow me on there and you'll find a photo from a couple of weeks ago in my archives. I go by the username of FlossieTeacakes. 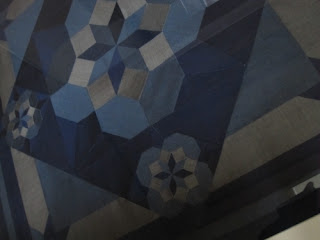 The wall hanging I made for my parents is no longer resting by the door, but now hung safely on one of the walls of my parents' house and I feel delighted by how well it fits in with their home. I love the frame that was made for it and, happily, my parents did too - my only regret was that I didn't have time to photograph it before I put it in there as it's almost impossible to photograph well through the reflections in the glass. It feels as though I ironed out many of the mistakes I'd made in creating the rubies wall hanging and it's an infinitely better-finished piece as I had a better idea about how to frame it and the key change that I made was to paper piece even the borders (and leave the card in place there) so that a uniform tension is retained right to the outer edges. I also designed this to have less areas where many seams were intersecting which produced a smoother finish that didn't require setting seams into a fleece backing to give an even thickness to the piece. I surprised myself by craving a complete break from needlework over Christmas. I'd been intending to finish hand-quilting my daughter's Liberty print quilt, but the will wasn't there. We worked out that the wall hanging had taken well over 150 hours of hand stitching completed in just under three weeks and by the time I'd finished my elbows hurt so much that I had to sleep with them dangling down like a gibbon's arms (completely unbent, rather than neatly tucked in like a small dormouse, which is my preferred sleeping pose). Who knew that one could be so crippled by one's sewing activities! So I did virtually nothing for the entirety of Christmas other than feel ill with the strange flu virus that most other people in England seem to be suffering from too, play Monopoly, watch films and see other friends who felt ill. It was ultimately quite restorative to spend so much time just pottering with my family, and I can tell that once I feel better (because we're currently on Day 16 of Christmas is Cancelled Due to Ill Health...and it's now January 7th!), I will be supercharged and ready for some Extreme Sewing once more. 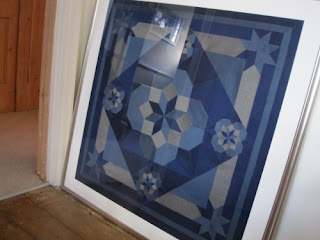 I still don't have the will to attempt to hand quilt my daughter's quilt though. So today I'm going to try something sneaky that I'm hoping may give the same effect. I'll let you know if it works.