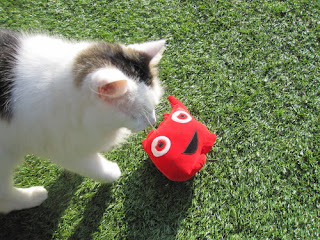 It seems like such a long time since I've visited my own blog...and indeed it is nearly three weeks! It also feels like weeks since I've sewn anything, but in reality I spent several days turning one of the Squeebles (the characters in the educational apps my husband designs for children) into three-dimensional form. I'm not naturally drawn to making stuffed creatures, so somehow it doesn't satisfy my desire to sew in the same way that working on a quilt, a dress or a bag might, however, I did enjoy the challenge of doing this. And it was a challenge. 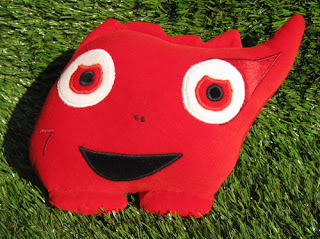 You would not believe quite how many versions of this character lie abandoned in various stages of construction on my desk, but finally I came up with something that met with my husband's approval and, more importantly, that my children finally declared did actually look like Whizz. 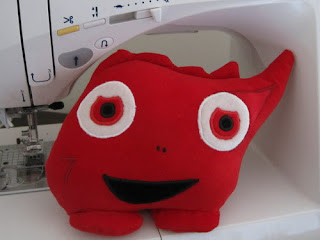 To get his nice rounded bottom, I was able to transfer some of my dress pattern drafting knowledge to drafting the pattern - there's something satisfying about finding an area where skills from different disciplines of sewing can cross over!

Anyway, Whizz is now the prize in a competition where we're asking children to create a picture of the house that they imagine their favourite Squeeble may live in. In case you're interested, as I know several readers whose children do use the Squeebles apps, the competition is here...which brings me neatly around to mentioning the other blog which I started writing several weeks ago. A Squeebles blog is an idea my husband and I have been talking about for the last year or so, and last month I finally sat down to write the first post in the voice of Whizz, the little red character you can see above. I have to admit that whenever my own children have asked me to tell them stories made up from my head, my heart always sank a little. My imagination seemed to instantly go into a state of paralysis and my inclination was to wrap things up with 'and they all lived happily ever after' three sentences into the story. So it has come as a complete surprise to me that when I'm writing the story down, rather than attempting to tell it directly from my head, it's actually something I love doing and ideas seem to pop into my head in a surprisingly free-flowing way!

Having two blogs shouldn't mean I'm here any less - I've increasingly been splitting my time between sewing and working for husband for several months now and the two seem to co-exist quite happily (not least because a lot of our work involves planning out game play and discussing ideas, which seems almost an invitation to sit hand-sewing). My absence recently has been more because a third element of having a stream of workmen in our house has thrown everything into chaos slightly and when they finally left, half-term began.

There will be more upheaval and change in exactly nine days time (we're counting...some of us more nervously than others, but it's currently like the countdown to Christmas day in our house, only possibly more exciting), but I'll tell you about that in my next post.