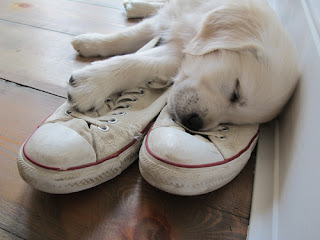 This is Nell, our 8 week old golden retriever puppy who came to live with us on Saturday. Her presence in our house is something of a surprise to all of us, as I've never liked dogs. When I was younger my grandparents ran a farm in the north of England where my father had grown up and, having bumped our way down the track to the farmhouse, our arrival into the muddy yard was invariably met by their excitable border collies. There were two fundamental problems with this: the first being that I have always had an overwhelming dislike of mud and the second was that one of the dogs had always been referred to as being 'nippy' and so I would attempt to be escorted into the farmhouse clinging to my father's leg in sheer terror, while my father seemed equally determined to loosen my limpet grip, no doubt slightly embarrassed by what his family may make of his rather wet town-dwelling daughters. I often implored him to park as near to the farmhouse as possible, but that rarely happened and running the gauntlet from car to front door (they were outdoor working dogs so once inside we were safe) was so traumatic that, once inside, my sister and I would settle down for the weekend in front of the fire in the sitting room and work our way through my grandmother's large stack of Bella magazines, the pages of which seemed to be filled solely with the sordid details of lives gone wrong (true life stories of murders, affairs and other awful things) that were both shocking and fascinating to young teenagers whose normal reading fodder didn't expand far beyond Judy Blume. We would rarely venture out of the confines of the farmhouse until it was time to dash back to the safety of the car two days later. 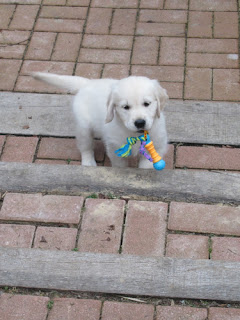 I have happily ignored the existence of dogs for most of my life, although, as our children have grown up, over the last five years an increasing number of family friends began getting dogs and I slowly became aware that my husband seemed to have a dog magnet in him and once in the company of a Labrador his whole face and demeanour seemed to change into that of a joyfully happy, grinning lunatic. My daughter was the same. My husband's campaign for a dog has been a long-running, but subtle one, run with low expectations as to the success of the outcome. 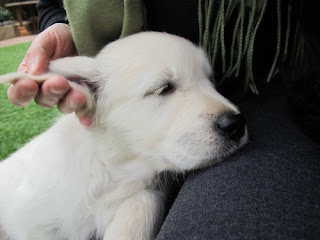 But more recently several things happened to change my stance on dog ownership. Firstly, since my husband has worked from home for the last 18 months I've become increasingly aware of how much a dog would benefit his life, both in terms of daytime company and a reason to get out at lunchtime - he is a naturally outdoorsy person and his life-long compromise to me is that we don't, and never will, live in a remote part of Scotland. Then at Christmas, we came home from an afternoon spent with his favourite chocolate Labrador and he mentioned in passing the feeling of having a dog-shaped hole in his heart...he is not normally prone to such sentimental comments and I was left privately mulling how comfortable I felt with being the wife who happily ignores this hole. Finally, some friends with a puppy asked us to look after it for the day. They deposited her in our house and at the start of the day I felt only a detached curiosity about her, but by the end, I could see a unique personality, rather than simply 'dog'. When they came to collect her at teatime, our clever (but devious) friend Polly noticed that I had fallen in love with her puppy's dog bed, which she'd recovered with a Liberty Tana lawn fabric, and insisted that she leave it with us in case we ever got a dog of our own as she claimed that her puppy had nearly outgrown it. Combining Liberty prints with dog paraphernalia is possibly the most underhand ploy I've ever come across and my husband owes a lot to Polly (Nell can be seen in the bed in the photo below). 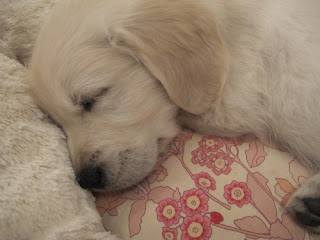 Anyway, one evening I surprised my husband and myself by agreeing to the idea in principle if we could find a breed that suited all of us. A lot of a dog's nature will be down to the dog as an individual, but I felt if we picked the breed carefully we had a better chance of owning a dog that suited our family. We spent hours every evening researching. Our children just wanted something that was 'sooooo cute', which meant their needs could be relatively easily fulfilled. I wanted something that was not known for showing signs of aggression toward other animals and people and that had a calm nature once the puppy phase was over. I also wanted a dog that was small, didn't moult and wasn't prone to chewing furniture. My husband wanted a dog that was highly intelligent and trainable...and he wanted a dog that felt substantial, like a Labrador. Our research concluded that there is no breed that meets all those criteria, particularly as it would be hard for even the most eager-to-please dog to be both small and yet large at the same time. 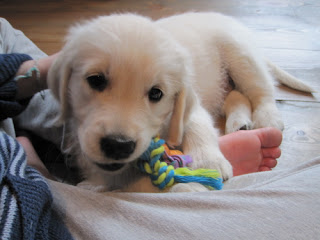 Eventually, I compromised on the lack of smallness, the moulting issue and the possibility of having my house eaten, where a golden retriever fails miserably on every count, and my husband compromised on...erm, nothing, because a golden retriever fulfils all the other criteria perfectly and really if you're going to fulfil your dreams then you may as well do it with the dog you really want rather than compromising (initially he would have been equally happy with a Labrador, but that was ruled out by me on the grounds that they tend to be livelier than Golden Retrievers and I am a creature who craves calm). It helps that I had always liked the kind faces of the Golden Retrievers that I saw in the street even in my dog-fearing days.

We eventually found what sounded to be the perfect breeders after a week of phone calls. I happened to ring to enquire if they had any puppies on the morning they were born and I could hear their funny newborn yelping noises in the background and it seemed like serendipity. We met our puppy's mum and all fell in love with her and were able to visit the puppies several times over the next eight weeks until one would be old enough to come home with us. In those eight weeks I sent myself on a crash course intended to leave me understanding and liking dogs more than I ever had before. I watched dog programmes obsessively on iPlayer (The Secret Life of Dogs and the series, Extraordinary Dogs); I began reading my husband's puppy training manuals at bedtime; I spoke to my dog-loathing mother who assured me that it was absolutely the right decision and that she felt we would all fall in love with her; I ran nearly every worry I had in my head past Kate and my other dog-owning friends and to every worry I received reassuring answers; and I began trying to work out which breeds certain dogs might be when I saw them in the street and looking at their faces to try to see what it might be about them that their owners had fallen in love with. And it worked, because I actually began smiling at dogs, in the way that I've always smiled when I've passed a newborn baby in the street! 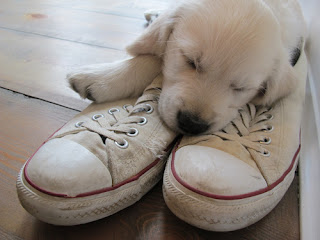 And now Nell is here and it doesn't feel anything like as foreign as I'd expected it to feel to have her in our home. She is sweet-natured, gentle and mostly (unexpectedly, as she is only 8 weeks old) calm. She runs in such a ridiculous, puppyish way that it's hard not to fall in love with her. Even her awful doggy breath does not deter me from cuddling her. My husband is thoroughly happy. She seems drawn to be by his feet and when he's not here she seeks out a pair of his shoes to lie on. And of course, our children adore her, because she is 'soooooo cute'. 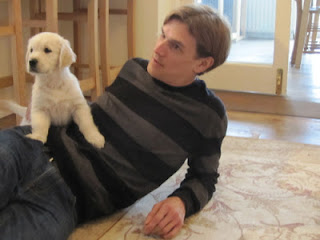 And just in case you were wondering, our cat who lives on our daughter's bed still lives happily on our daughter's bed with little change to her life and our other cat who we had worried may either attempt to eat the puppy or leave home, has actually been nothing but curious, coming and sitting nearby to watch her while she plays and silently padding around her to get a closer look when she sleeps.

I think by nature I am still very much a cat person, but as Jacqui (a fellow cat person, who owns a dog) said to me recently, you don't need to be a dog person, you just need to be a person who loves your dog. It's a relief to find that, just as everyone said I would, I do feel rather smitten with Nell.