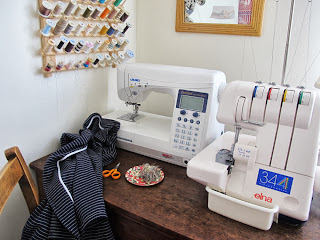 It feels like a long time since my overlocker has ventured out from its place in the cupboard beneath the stairs. I always dread using it - it somehow doesn't feel like proper sewing - I think of it as mowing the lawn when you'd rather be gardening. But once I start using it I forget that it's something that only moments earlier my inner-luddite had cringed at, and find myself amazed at just how quickly a project comes together when you're not fussing over french seams.

In my last post I mentioned a jacket that I'd worn a lot this summer and decided that I really would like to be able to recreate a winter version. I drafted a pattern that's hopefully very similar to my existing jacket, with a few changes, such as a dart at the bust (my original jacket is from Gap Kids, so lacked this) and no centre back seam. Drafting the convertible collar was something of a challenge as I haven't attempted one of those before...or even actually sewn one. 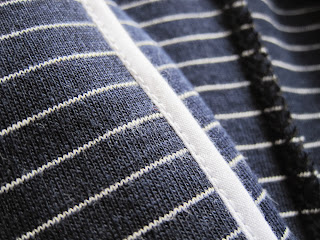 To test my pattern I used some fabric from my stash: a thick, navy knit fabric with a white pinstripe running through it. Amazingly, it's come together perfectly so far. I still have the welt pockets and buttonholes to do, but other than that drafting and making it was a freakily speedy process, which was just perfect for the window of time I had to get it done (at the moment, any free time I get when the children happen to be out of the house or amusing themselves I'm working alongside my husband, so some time to sew feels like a precious thing until they return to school in September). I'm looking forward to moving onto making a cold-weather version next. I don't have an EPP project going this summer, which is a nice thing that can be done while the children are around...but even that takes time to set up with planning out a pattern and then getting all the templates and fabrics ready and it's time that hasn't appeared yet (also my quilt design software, EQ7, not working on my Mac causes quite a fundamental problem too).  I'm hankering after the time when I would launch into doing something like that at 10pm, when at the moment the best I can manage is falling asleep over my book at 9.30pm. Is anyone else suffering in the same way? I seem to have so much more energy in the winter. Last night was the first time for months that I've stayed up really late sewing - I re-remembered how energising it is, but it requires becoming immersed in a project at a decent hour beforehand to allow me to actually have the motivation to do it.

But that's nothing compared to opening a fabric shop a month after you've had your first baby...which is what Courtney, owner of Seamstar and my newest sponsor, did. Seamstar was amongst the first really lovely, modern online fabric shops that I remember opening up here in England (if you've only been sewing relatively recently you may not be aware that it wasn't so very long ago that you would have found yourself placing overseas orders to get access to the lovely designer fabrics that are so easily available here now). I've always loved Seamstar's fabrics (it was there that I found the lovely Monaluna apples fabric which features as the main print in my son's quilt, which I made for him a few years ago - those trotters look so very small now! My daughter now has feet 3 shoe sizes bigger than mine!). 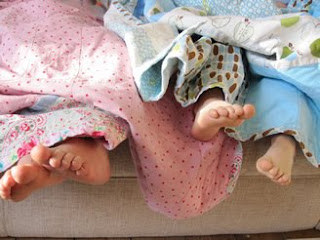 I asked Courtney if she could share a little of the background to Seamstar. For me, the idea of owning a fabric shop has a certain mystique about it (as does owning a chocolate shop or a children's shoe shop). I wonder how a fabric shop owner picks their stock when I have so much angst finalising which fat quarter I'd like. Here's what she said:


I started Seamstar in 2008, a month after giving birth to my first baby. Just a bit insane when I think about it now! When the baby was sleeping I was cutting fabric, learning html website code & researching the best way to package craft products (which, by the way, is in lovely colourful tissue-paper, carefully tied with ribbon & placed in a waterproof postal bag).

There's been a lot of changes since the start; Seamstar doesn't only sell fabrics but now sells lots of different things like felt, ribbons, trims and haberdashery. From the early days of just me we now have a lovely team of 8 people. We also have a monthly Craft Club so people can join in with our website and collect our products.

There are some things that haven't changed throughout the last 5 years; I still spend a lot of time designing (and redesigning) the website. I don't think the Seamstar website will ever be finished.

I'm delighted to learn that Seamstar have plans for expanding their dressmaking range too! They are about to launch into something of a blog overhaul, so you'll be able to hear about those things as and when they happen. In the meantime, you can find all sorts of lovelies in their shop.

In other news, if you write a blog (or would like to!) and enjoy thinking and talking over the practical issues, or even the emotive aspects, of doing so, then you may like to take a look at Blogtacular. This is the brainchild of the two lovely Kats (Kat Goldin and Kat Molesworth) and will be held at London's Royal Institution in May 2014. If you're interested in going, now is the time when you can chat to the two Kats to help make it an event that you feel really excited about attending.

Anyway, it's Friday afternoon. The children are off shopping for ingredients to make a Coffee & Walnut Cake together and I'm going to make some of Sophie Dahl's peanut butter fudge alongside them (the latter is a once a year creation, due to it being so unhealthy). As with the terrariums, I've assigned myself a project to prevent myself from interfering in their lovely work - the nice thing about getting older is attempting to develop solutions to try and keep one's flaws in check (and there's still SO much work to be done, so I expect I'll be able to enjoy hunting them down well into old age)!

I hope you have fun planned too.