A jacket for Dame Judi 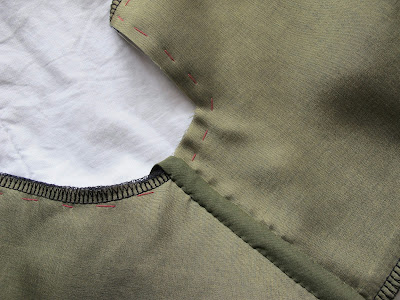 The opportunities for hand-sewing just keep on coming. At the weekend I got the chance to cut into the beautiful boiled wool that Dorte sent me for my jacket (my mother-in-law swept in and took care of the children, as well as doing all their homework with them, leaving me with some much-needed time to sew. Sewing while hearing all the things you should be doing, being done, is even better than just sewing. In the same way that lying in bed is made even nicer by hearing someone vacuuming downstairs (which has only happened once, but the memory of it has stayed with me as it was such a good one).

This is going to be a, hopefully unbroken, version of the broken jacket. While in retrospect I'm not convinced that the boiled wool needs any lining as it's actually thick enough to keep you toasty on its own, I plumped for underlining, rather than lining this jacket. If you're not sure of the difference, a lining is where you make up a replica of the garment and then sew the two together with all the seams hidden away neatly inside, while underlining means that you sew the lining fabric to the outer fabric at the outset and then treat the two fabrics as one.

I've worked with this lining fabric many times before, but using it as an underlining made me unexpectedly aware of quite what a slippery customer it is. When I attempted to sew it to the boiled wool, not only did it move around all over the place no matter how well I'd pinned it, but the wool began to distort its shape as I manhandled it through the sewing machine: it was an ugly situation that caused much cursing. 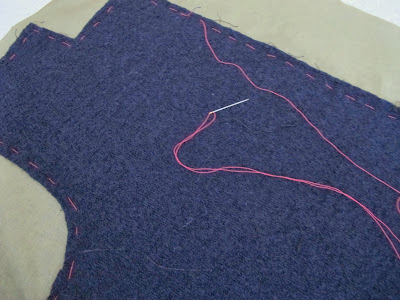 Eventually, the way around it was to gas myself as I directed huge amounts of starch spray in the direction of the lining fabric, leaving it feeling as crisp as a piece of paper and myself feeling delightfully intoxicated by the overpowering scent of fresh bedlinen (only without the benefit of actually having any freshly starched sheets). From there, I used quilt batting spray (more intoxication) to adhere it to the wool fabric. I then stood at the table and hand-basted the two layers together using a large tacking stitch, being careful to leave the fabrics lying flat so that I didn't distort the shapes. Once basted, I could cut them out and overlocked the edges so that the fray-prone lining had a neat edge to it. 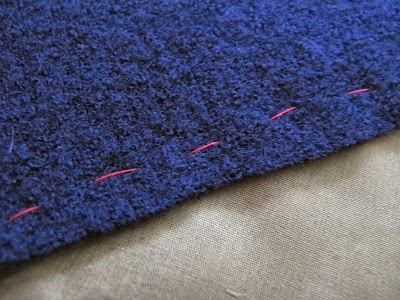 I'd decided to underline the jacket as I thought it would be quicker and less problematic when it came to dealing with the tricksy collar area. However, this tactic leads to a number of exposed seams which need to be dealt with by hand, so that the stitches aren't visible on the jacket outer. 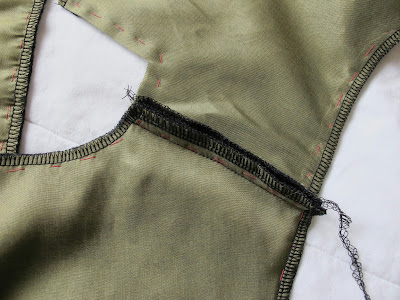 To do this I cut down the seam allowances and then hand-sewed a binding over the top of them. It's actually so satisfying finishing clothing by hand and allows for all sorts of imaginings...primarily that one is a seamstress at The House of Elliot or even a highly skilled couturier, hand-stitching something for Judi Dench to wear to the Oscars. I have no idea quite why Judi Dench is my wearer of choice, other than that I think she might actually hang it up properly when she takes it off at the end of the evening, rather than leaving it in a pile on the bathroom floor.

I'm now not too far off finishing...with just the hemming and buttonholes to go. The buttonholes are proving problematic though as the automatic buttonhole on my machine is misbehaving and seems unable to cope with the different thicknesses of fabric which surround the area where the buttonhole is to be made. More cursing. More spraying of starch in order to produce the stiff upper lip needed to face attempt number 977 of creating a buttonhole. It's not so much Florence and the Machine, more Florence Against the Machine. I'm not sure my lip is well primed enough to finish the battle though, as I'm considering avoiding machined buttonholes altogether and creating bound buttonholes instead.