Ideas for a rainy weekend 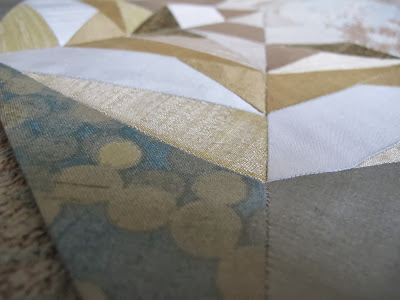 It's always a lovely feeling once you have all the pieces cut out and wrapped up, ready for sewing, when working on an English paper piecing project. 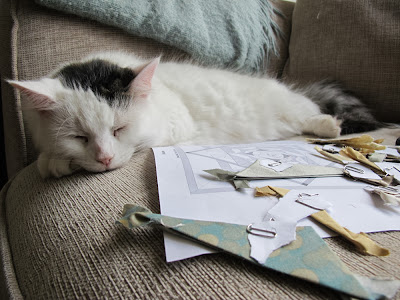 My filing system for ordering the first eighty pieces was taken care of by a box of rabbit-shaped paper-clips and scraps of numbered paper, overseen by the cat. 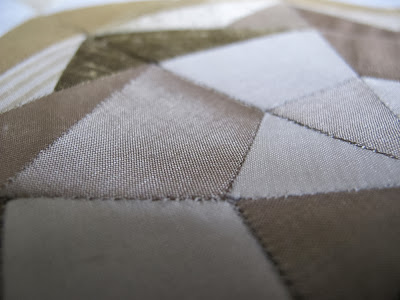 I did a substantial block of sewing this together while working my way through The Brady Bunch box set with my children. If you didn't grow up with this televisual delight yourself, it's an early 1970s sit-com about a man, Mike Brady, who has three boys, and happens to fall in love with and marry a woman who has three girls. The series is about their life thereafter living together as 'the Brady bunch'. My sister and I first discovered this when we went to live in Australia, aged 6 and 9, and it was a huge salve and distraction to our home sickness, so I love that my children discovered this series for themselves while at their friends' house and requested a box set as a birthday gift. Thirty years on, it has lost none of its charm for me and is still just as watchable. 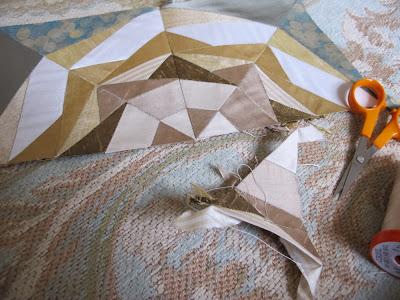 Sewing this together has proved something of a challenge because I'm using such a variety of thicknesses of silks. The added bulk around some card pieces but not others can easily throw the whole thing off and it's difficult to get a crisp point using some of the thicker silk dupions. I've actually now finished this central square (the picture above only shows half of it) and although I felt worried about how 'true' the square would be and therefore how flat it would sit, all I can say is that an iron is capable of working many miracles.

I've had a couple of suggestions on Instagram that I should put this design out as a pattern, which I'd be happy to look into if there's enough interest. If you'd consider making this yourself, would it appeal to you more as an English paper piecing template, or as a pattern which could be primarily foundation pieced? And if so, do you feel you'd need comprehensive instructions to go with it, or would you find only the templates necessary?

It's Friday. We're about to go out to lunch to celebrate completing work on our latest Squeebles app, which has been three months in the making. After an evening out with friends tonight, I'm hoping for a weekend of more Brady Bunch, more hand-sewing and some low-level pottering. What will you be doing? 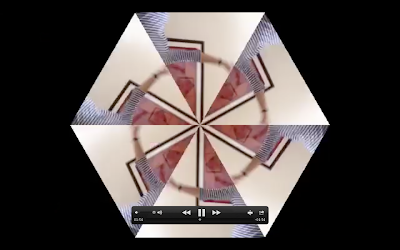 If you're in need of ideas for a wet weekend, I suggest VideoStar. It's an app that lets you create a music video to any song that's in your iTunes library. The special effects (many of which are in-app purchases, which have proved to be worth every penny, but which make me feel a bit loathy as I would have rather just paid £10 up front) are incredible and it will amuse children or teenagers for hours whilst being both brilliant exercise and really quite creative. I've enjoyed being asked to be behind the camera while my children and their friends have planned out dance routines. It will also amuse adults too if you have a group of friends that you are happy to be silly with. 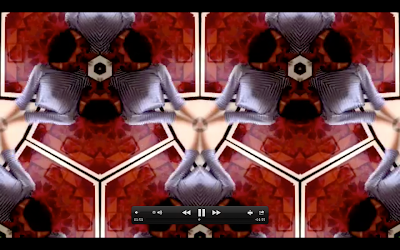 From a quilting perspective the app is completely fascinating as some of the effects give the dancer the ability to be in a kaleidoscope (and therefore a glorious array of quilt-like designs that flash before your eyes!). It's tricky to find a screenshot to show you where people's faces aren't in it, but the screenshots above shows a little of the app's magic (albeit static magic). Wearing a stripy top and dancing with my rubies wallhanging in the background, it's a daughter/English paper piecing kaleidoscope. What could be better?

Postscript: I feel compelled to say, just in case my mentioning it hot on the tale of saying that we'd finished our latest Squeebles app causes any confusion, that VideoStar is not one of the educational apps designed by me and my husband - it's an app completely unrelated and is made by someone else. Your response to the singing flower birthday candle in the last post, which I now know will feature on the cakes of fellow seamstresses far and wide (yay! I'm so pleased you loved the lunacy of this as much as I did!) has encouraged me to share with you some of the non-sewing things we're enjoying at the moment. Do let me know in the comments if you have anything that you or your own family love which you think we may enjoy. Or if you just want me to STOP because a) I'm encouraging you to spend money on fripperies b) causing you to bypass your good sense and taste too frequently or c) you just came here to read about the sewing. x
Email Post