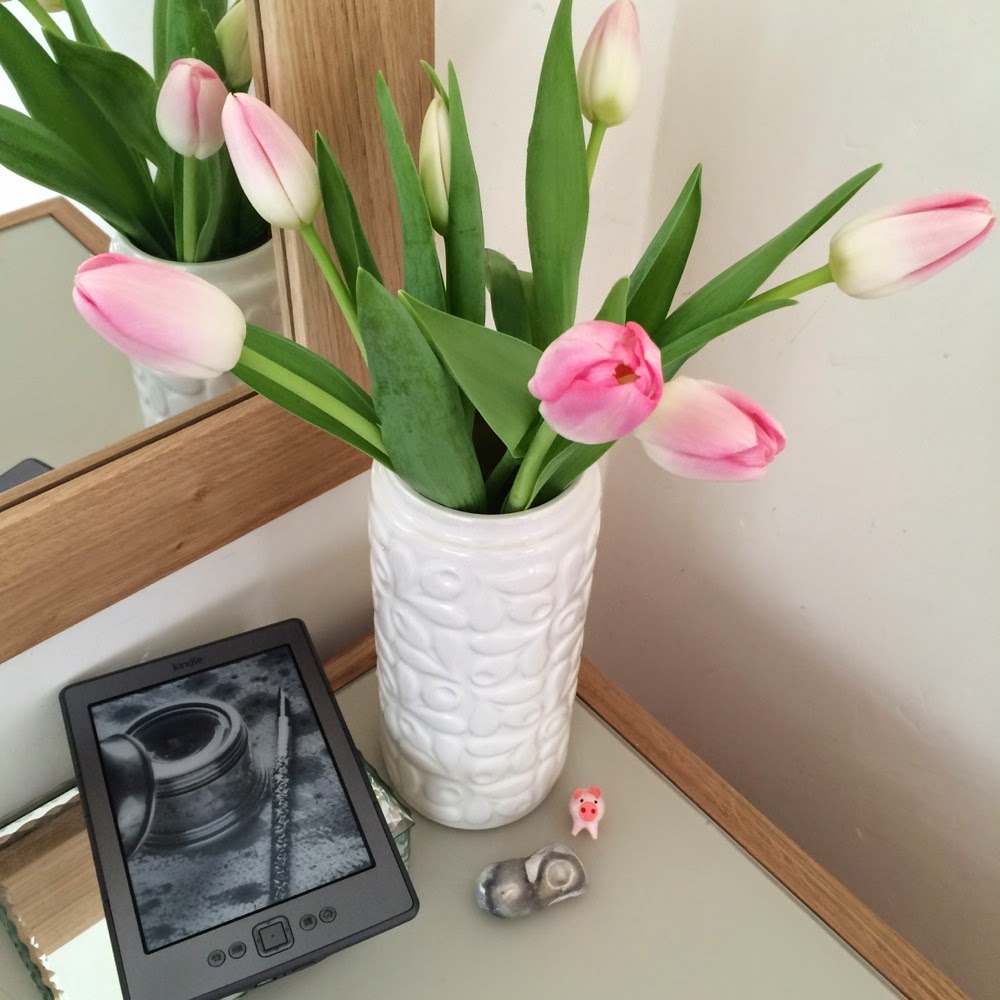 Firstly, I'm so sorry that it's taken so much longer than promised to announce a winner for Christine's book giveaway - I'll do that in my next post once I've got organised again - your stories were a complete, and very comforting, delight. I've been in bed with the worst bout of tonsillitis that I've ever experienced (and as someone who has form for getting tonsillitis several times a year, I have a substantial history on which to base comparisons). I don't usually stop for illness (which is something that infuriates my husband and causes him to adopt a Basil Fawlty voice and bluster around saying things like 'Just dying, dear, but must press on! Important things to do!' whenever he passes me), but in this case I felt so dreadful that I actually just lay in bed and slept for hours on end and when I woke up the only thing I had the energy to do was to devour books and actually listen to my husband's orders (a very rare occurrence) to do absolutely nothing. Although with a temperature over 100, I was required one day to take a brief authorised break from resting to rustle up a fancy dress costume, but more on that for another post. 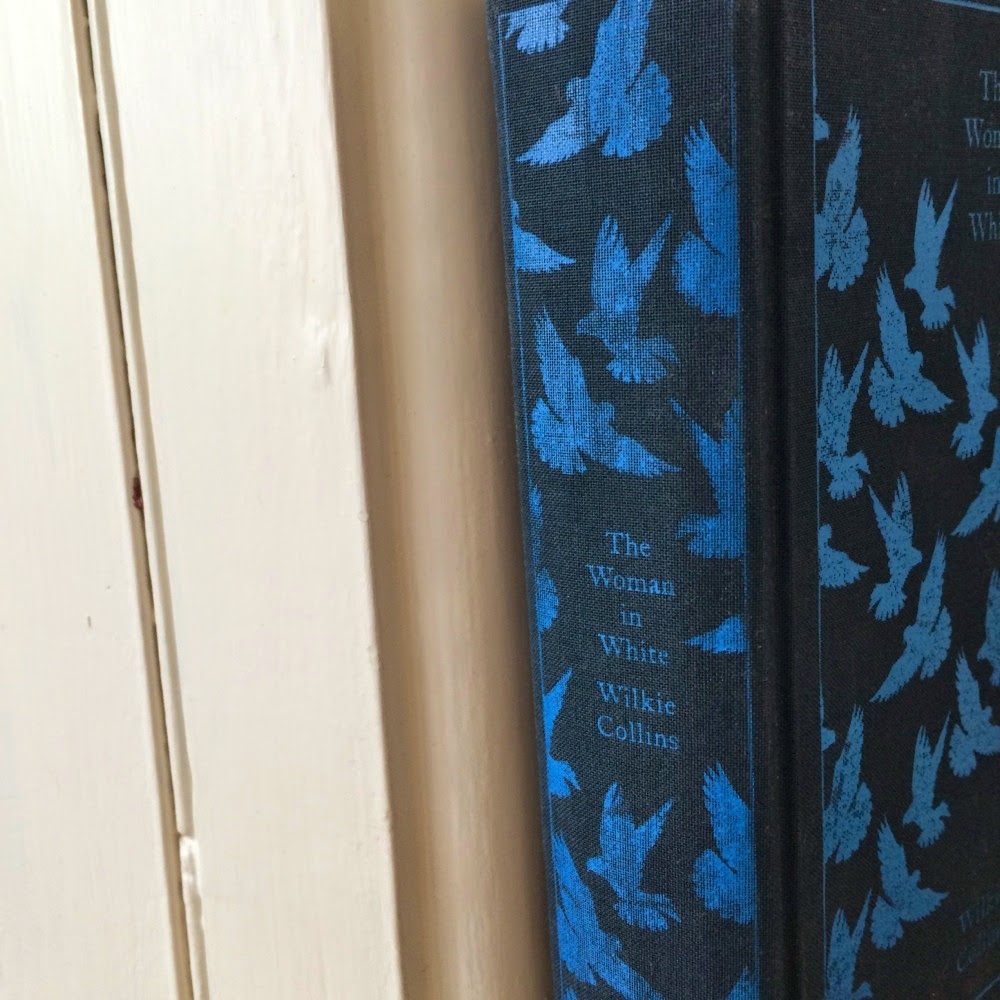 I borrowed my husband's Kindle several years ago and at the time really didn't enjoy the experience of digital reading, but I stole it back last week and found myself unexpectedly falling in love with it. As I'd worked my way through all 629 pages of the beautiful cloth-bound copy of Wilkie Collin's epic novel 'The Woman in White', I'd found myself exhausted by having to keep the pages open and hold such a weighty book (yes, that feeble) and would invariably fall asleep over it, drifting in and out of consciousness with an awareness that the cover was jabbing me in the cheek, but without the presence of mind to actually move the book before falling back to sleep. So, on finishing that, when I moved on to Kindlised versions of books, I experienced a sensation of 'Oh my goodness: so light; so little page turning; so uninjurious while I sleep; such instant acquisitions of new reading fodder; so wonderful to not have the room littered with teetering towers of books; so refreshing not to have to try and make room for new books on our already overflowing bookshelves'. I've found myself feeling quite attached to it. 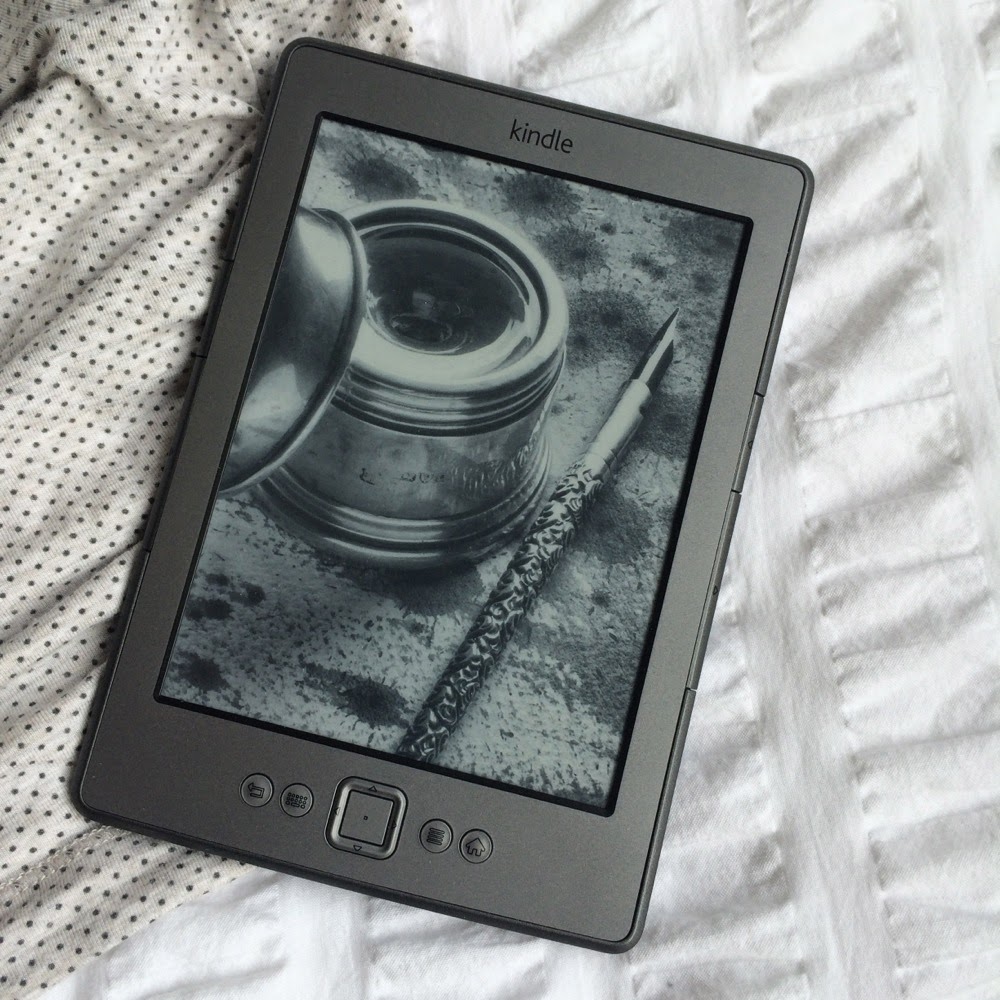 I have read more books in the last two weeks than I've read in the whole of the previous year. Here was my rather random choice of reading material.

1) The Last Runaway, by Tracy Chevalier - my best friend bought this for me and, happily, in amongst the wonderful story, it features quilting quite heavily and most deliciously. I love that it does this without having been penned for a freaky sub-genre entitled 'Novels Written Specifically for Quilters' (Quilt Lit? Quilt Fiction?). There's an assumption within in it that regular people will enjoy hearing the details of constructing an English paper pieced quilt; there's nothing quite as lovely as having your obsession normalised. (You can read Tracy's blog, which features some quilts as well her writing news, here).

2) Girl with a Pearl Earring, by Tracy Chevalier - having fallen in love with Tracy Chevalier's writing style in the previous book, I went straight onto my (husband's) Kindle and downloaded this. No quilts, this time it's painting, but wonderful all the same.

3) The Homecoming, by Anna Smith - I really enjoyed this book - it's a story set over a hazy summer in Scotland, within a small rural farming community, where a secret lies at the heart of it. Gripping, but a very easy and enjoyable read.

4) The Woman in White, by Wilkie Collins - I feel like my life would be richer for this having been edited down from 629 pages to 300, but it was so compelling that I couldn't abandon it without finishing it. My father, sister and friends all love this book; I enjoyed it but felt as though I'd missed something as I wasn't quite as delighted by it as they were. Perhaps it had something to do with the jabby book cover that attacked me in my feverish state.

5) Narrow Margins, by Marie Browne - this is the true story of a family who, facing financial ruin during the recession, left their conventional life to live on a near derelict Narrow Boat with their young family. I'm unsure quite why this tale of the gruelling reality of such a thing thrilled me so much, but when I finally felt well enough to turn my laptop on, the first thing I did was book a summer holiday for my own family aboard a narrow boat. I'm so looking forward to this (luckily, it's of the not-at-all-derelict-and-actually-ridiculously-luxurious variety).

6) The obsession continued. Next I read the sequel, Narrow Minds, also by Marie Browne.

7) A Street Cat Named Bob, by James Bowen - I downloaded this having remembered seeing it mentioned in the press and on virtually every book table in every bookshop I've been in recently. This is a true story about a recovering drug addict whose life is totally transformed when he takes in a stray ginger Tom cat who ends up busking with him each day in Covent Garden and later, sitting by James' side as he sells copies of The Big Issue. Giving a thankfully wide-berth to the voyeuristic real-life stories genre, it is wonderfully honest, without a hint of self-pity and just incredibly upbeat, endearing, hopeful and lovely. I've bought the abridged version he's released for teenagers to give to my daughter as I think she will adore Bob and James and also because it discusses drug addiction and homelessness in a way that feels completely right).

8) A Fault in Our Stars, by John Green - I discovered this on a list of '25 Books to Read Before You're Thirty'. Having missed the age deadline, but wanting to fill in the gaps anyway, I bought it. It has had rave reviews and was number 1 on The New York Times bestseller list. Written for teenagers, but seemingly enjoyed by adults in equal measure, it's a beautifully written novel, which I wept and laughed my way through in much the same way as I did through R J Palacio's Wonder a few years earlier.

9) The Unlikely Pilgrimage of Harold Fry, by Rachel Joyce - I got less than half way through this before abandoning it, as I was finding Harold too irritating. It's possibly unfair to review a book that you haven't actually finished as some novels are all about the ending, so I'm biting my tongue (and typing fingers) and not detailing the many reasons why I found Harold such a loathsome creature, which is incredibly difficult as just thinking about him makes me feel like ranting. Out of 2753 reviewers on Amazon, only fifty other people felt the same as I did about Harold…most found him eminently likable. I don't know quite what to make of that, other than questioning whether I was in a bad temper when I read this book and so failed to warm to him.

10) My impatience for Harold shelved, I risked choosing another book with a male character at the heart of the book, but this time I'm finding him much more endearing and likable. I'm half way through The Rosie Project by Graeme Simsion which I'd avoided initially, wrongly assuming from the title that it was chick-lit (which I do occasionally read, but it's just not what I was in the mood for this week). However, it's wonderful and when I've been reading it in bed late at night I've risked choking by inhaling my own laughter in an attempt to not wake my husband.

I'm considering moving on to the Light Between Oceans, by L M Stedman after this. Do you have any recommendations?