The Quilt Under the Bed 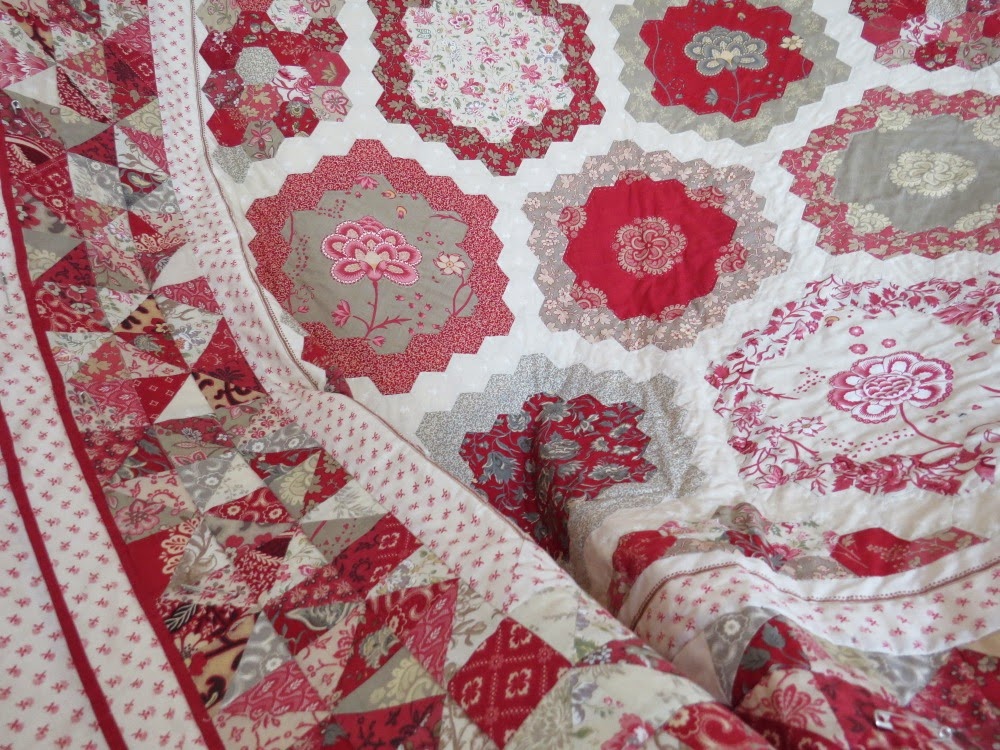 While this post has a working title of 'The Quilt Under the Bed', you should know that its actual title is something more akin to the 'The Red Devil Under the Bed that Causes Much Hand-Wringing and the Kittens with a Strong Sense of Irony', but I decided that it may seem a little dark and so decided to offer up a palatable, succinct alternative. This quilt, which lives, unfinished, beneath our bed, has become a source of shame for me. A few summers ago I worked on it feverishly, hand piecing together hexagons at every opportunity…it went on car journeys, days out, trips to the park, parts of it even came along to Italy with me. By Christmas time I'd finished the English paper pieced section and I'd begun chain piecing half-square triangles to go around its borders. 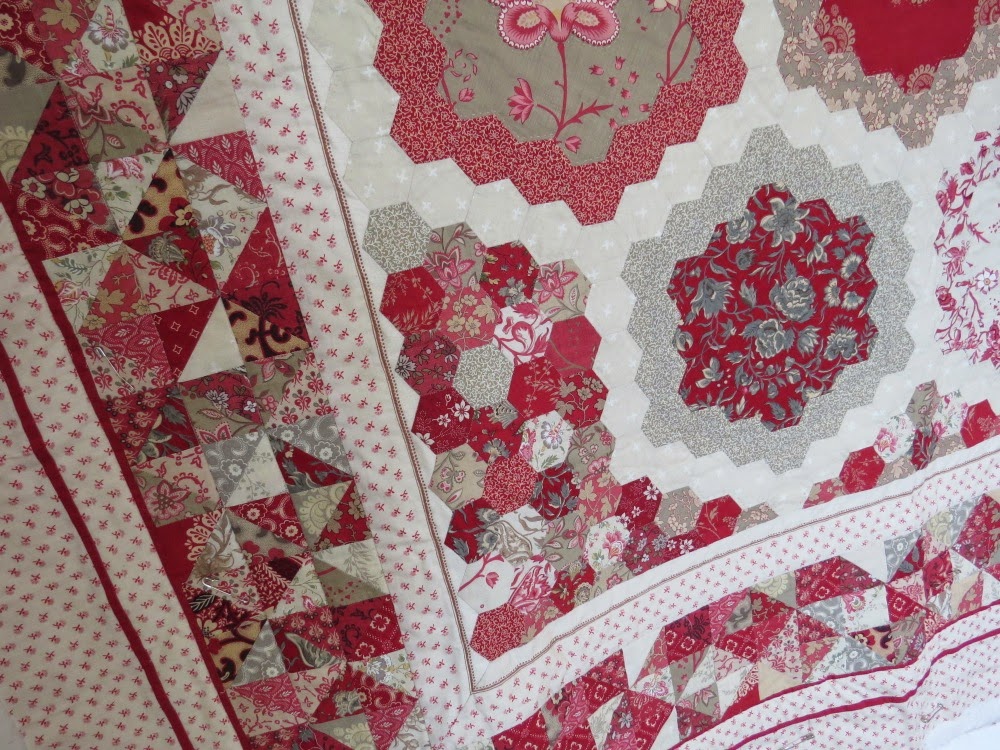 Eventually, I hand-quilted the large central section and then, for one reason or another, I put it away for a while. I had really, really loved this fabric at the time; whenever I looked at it, it gave me such delight. But when I got it out again it had lost a little of its magic for me, so when I came to machine quilt the outer borders, rather than fussing over my stitches being perfectly hidden in the ditches where seams join, I hastily dragged it around beneath the foot of the machine, letting tiny puckers sit, where they would usually be unpicked. It felt like I was wielding an elephant; nothing has ever felt more like sewing through treacle than this quilt did. I put it away again hoping it would disappear, but every time I went to get something out from under the bed I'd see that, curses, the damn thing was still there. 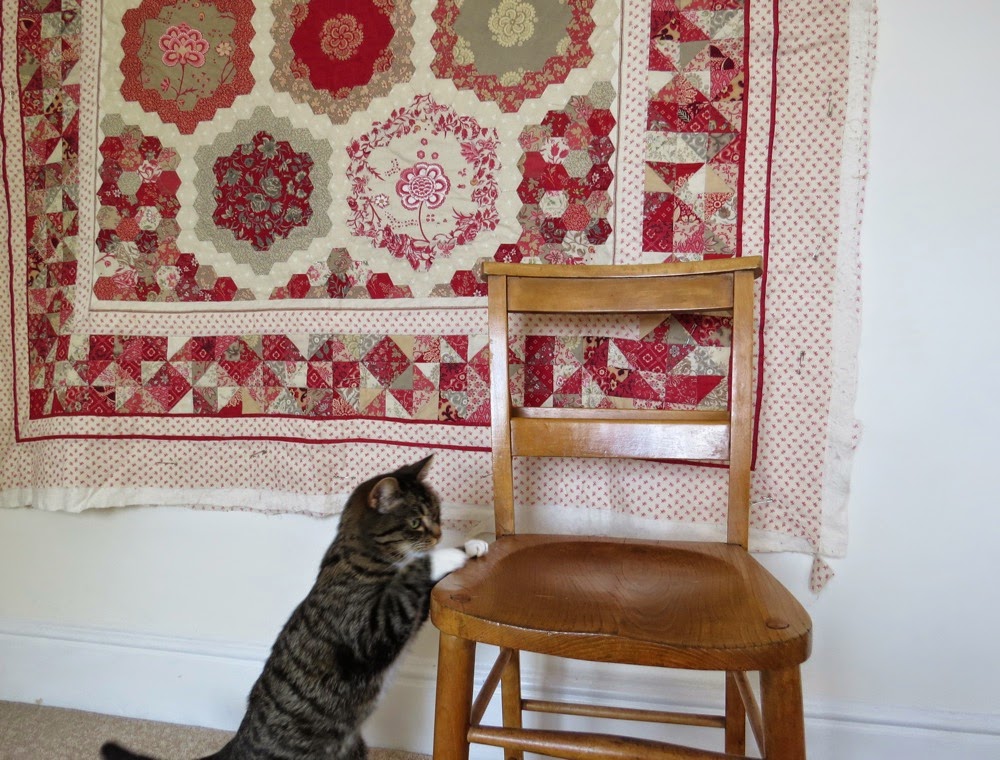 It has gone on festering beneath our bed, gathering resentment whenever I've thought of it, for a further year. Occasionally, I've pulled it out and thought: gosh, I really must finish it, it's just the binding to go now…but then I've thought what a horrific waste of time that would be and put it away again as I can't bring myself to spend the time binding something which I know I won't want to use. I've thought about giving it to a charity shop if I could finish it, but I feel too embarrassed by the puckers in the quilting to let it go out alone in public (they are not big puckers, but I'm a perfectionist and so they actually make my skin crawl). And so I thought I'd ask what you do when you've spent hundreds of hours working on something only to find that your taste has changed and its shine has gone dull?* I'm considering the community textile recycling bins under cover of darkness… 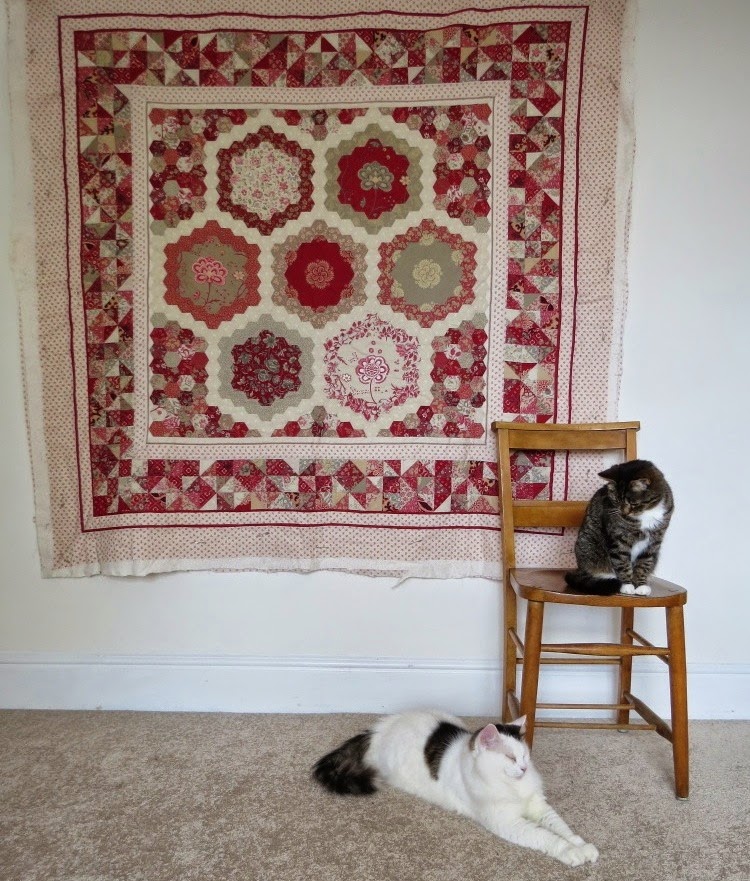 As if to confirm its horror, today when I decided to photograph it for this post, my cats appeared from nowhere and sat looking stately in front of the quilt as though attempting to add to its fusty appearance. When I showed these photos to my daughter this afternoon, she couldn't stop laughing. You may have to know the personalities of our cats a little to find this funny, but view these with the knowledge that: they never choose to spend time in the same room as one another; they rarely willingly come near anyone other than my daughter; if someone moves they usually run away; they are not cats that like to work the camera; they have only ventured into the room where this quilt was temporarily hanging a handful of times in the seven years since they came to live with us. I am delighted by the belief that they collaborated for one time only with the express purpose of providing an ironic foreground for my quilt. There is no other explanation as to why else they would suddenly flock around me and my quilt, confidently jumping on and off the chair (which had only been placed there so I could hang the quilt up from the picture rails), swapping places with one another, and doing their best impersonation of serious show-cats from the 1800s in order to make my quilt look even more fusty whenever I pressed the camera's shutter. I love them for it - they played it perfectly. They have now gone back to their separate beds and recovered their impish spirits with jumpy rescue cat expressions. 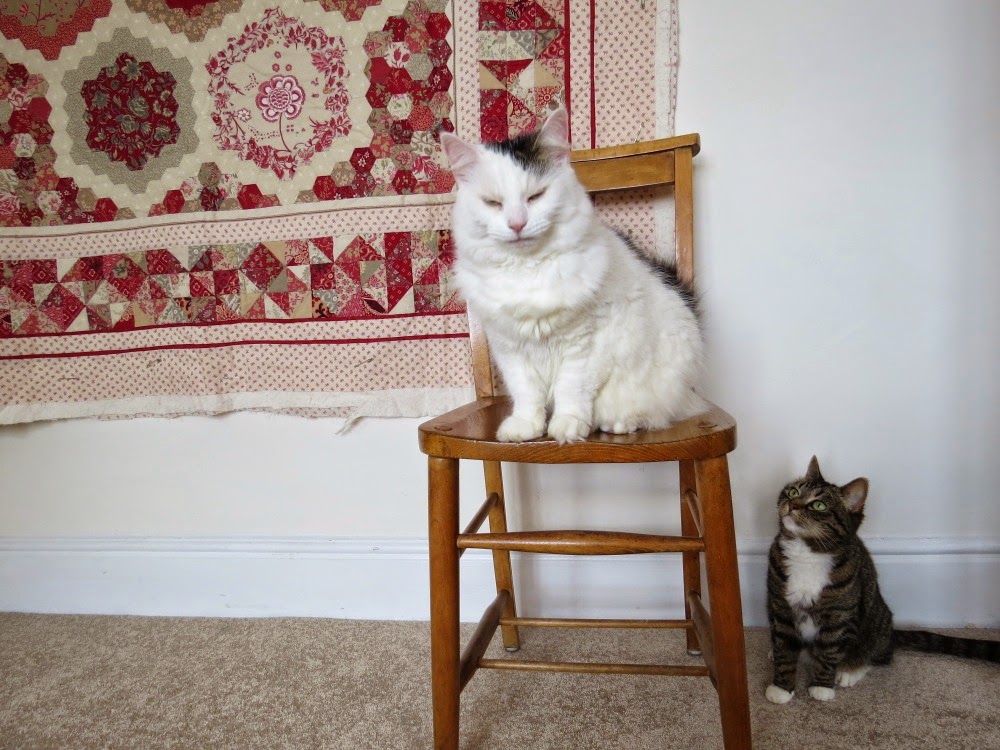 So anyway, I'd love to hear if you have any similar things hiding beneath your own bed and how you deal with them. The lesson that I'm taking from this is not one which I can imagine actually learning from (because I love labour-intensive projects), but it's an awareness that the longer something takes to complete, the more time there is for you to fall out of love with it before you've even had the chance to use it. However, again, it's also brought home to me that most of the enjoyment comes from the process rather than the completion, because joking aside, I'm not actually at all devastated by how many hours I've lost to this quilt, more just the waste of fabric involved.

Ps. If you want to read any of the posts written when I still loved this fabric, the English paper piecing post is here; more EPP here; The nine million hours I spent over getting the quilt wadding for this just right can be found here; making the half-square triangles using Thangles has been documented here.

* You may tell me that has never happened to you and that this now unloved quilt has arisen from a fundamental personality flaw, namely being a changeling, flibbertigibbet in need of some constancy, but please attempt to do so while sitting on a Shetland Pony, rather than astride a high horse, or I may be forced to crawl under the bed with the retched quilt! (And yes, 'high horse' - it's an expression that makes me think of the delectable Gilbert Blythe too) x
Email Post