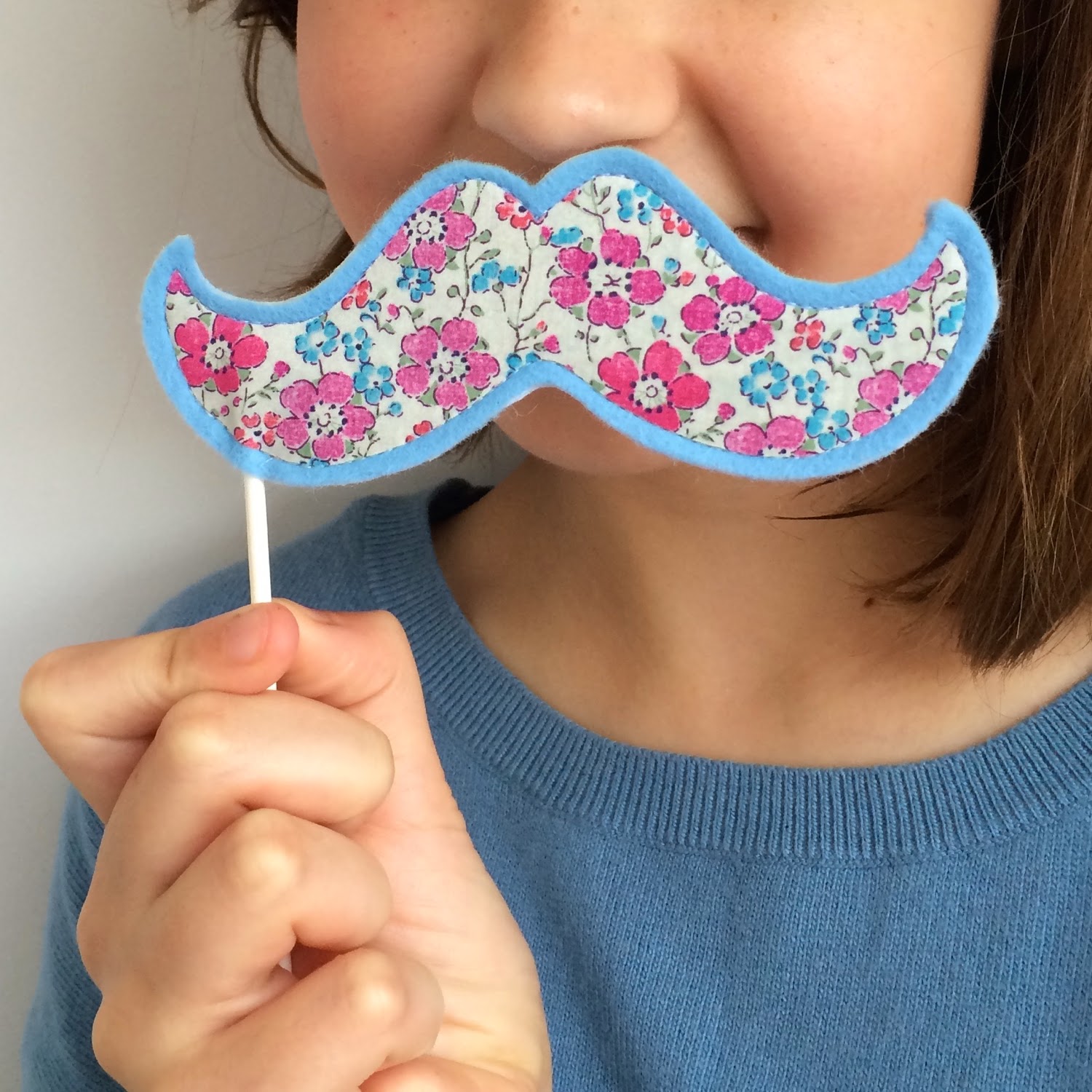 Several months ago I was contacted by Emma Mitchell and Jane Toft who had, under the lovely  umbrella of Mollie Makes, decided to create a bookazine of crafty goodness in aid of Comic Relief. For those in other countries who may not be familiar with it, Comic Relief is an annual event that's held in the UK where money is raised with the aim of reducing poverty, to a backdrop of general silliness and comedy. Comic Relief began in 1985 and later, in 1988, Red Nose Day became a part of that fundraising. I think I was in my first year at secondary school when this event launched and I can still vividly remember the utter excitement of wearing a large plastic red nose to school - there weren't the regular dressing up or own-clothes days at that time, so this seemed like a very unorthodox addition to our school uniform, the wearing of which gave me butterflies in my stomach. Although in that first year, Comic Relief were yet to refine the comfort of the fake nose, so I remember it being a slightly painful excitement, which left deep red imprints where the plastic had squeezed my nose!

Anyway, back to 2015 (where I am 37 and no longer in secondary school) the bookazine is called The Big Comic Relief Crafternoon and it's packed full of wonderful projects and tutorials from lots of talented craft, crochet, knitting and sewing people. From memory, I think that Jane Brocket, Tif Russell and Lynda Lewis are just a few of the contributors. 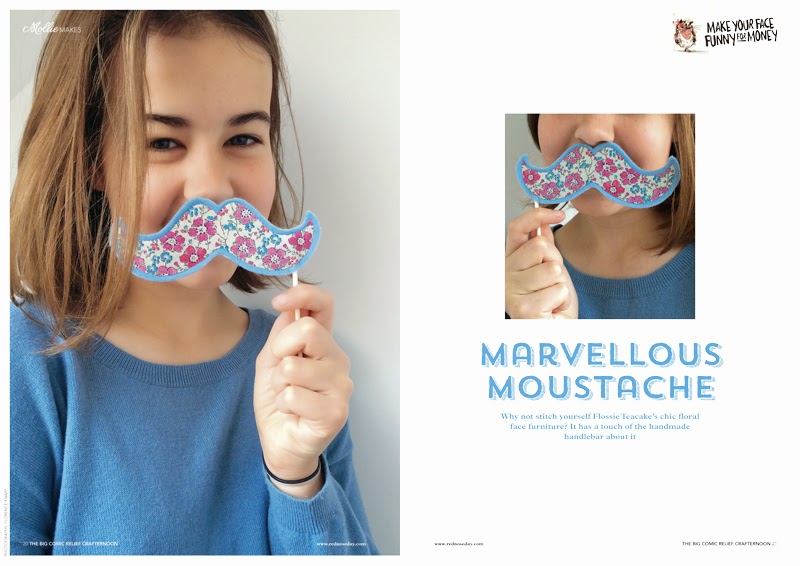 I was delighted when Emma invited me to contribute a pattern design that built upon the theme of Red Nose Day, to include some more hirsute facial enhancements, which people might be able to wear on the day. Knee-deep in a paper piecing project that was giving me more stroky beard moments than any sewing project really should, the idea of sewing something completely frivolous, but for a seriously good cause, appealed hugely and I plumped immediately for some mustachioed goodness because they are such a delight, as are most things that come in many varieties - is it just me, or does anything that that could be feasibly displayed on a tea-towel depicting the various guises it may appear in seem instantly appealing?

I learned many new moustache names when researching shapes and also happened upon some interesting beard names - I particularly liked the shapely French Fork. If you live with a bearded beauty (or if you happen to be actually be one, reading my blog), you may enjoy perusing this chart that I came across, where you can discover just how trustworthy he's perceived to be. I'm delighted to find that my own father, newly sporting a beard for 2015, remains at the highest level of trustworthiness with his Full Beard and hasn't turned into a good-for-nothing scoundrel who would sell his own grandchildren for a shiny new paperclip). But anyway, back to moustaches: my tutorial features the classic Handlebar Moustache, my favourite style, but it's very adaptable, so you could easily convert it to suit your own preferences. 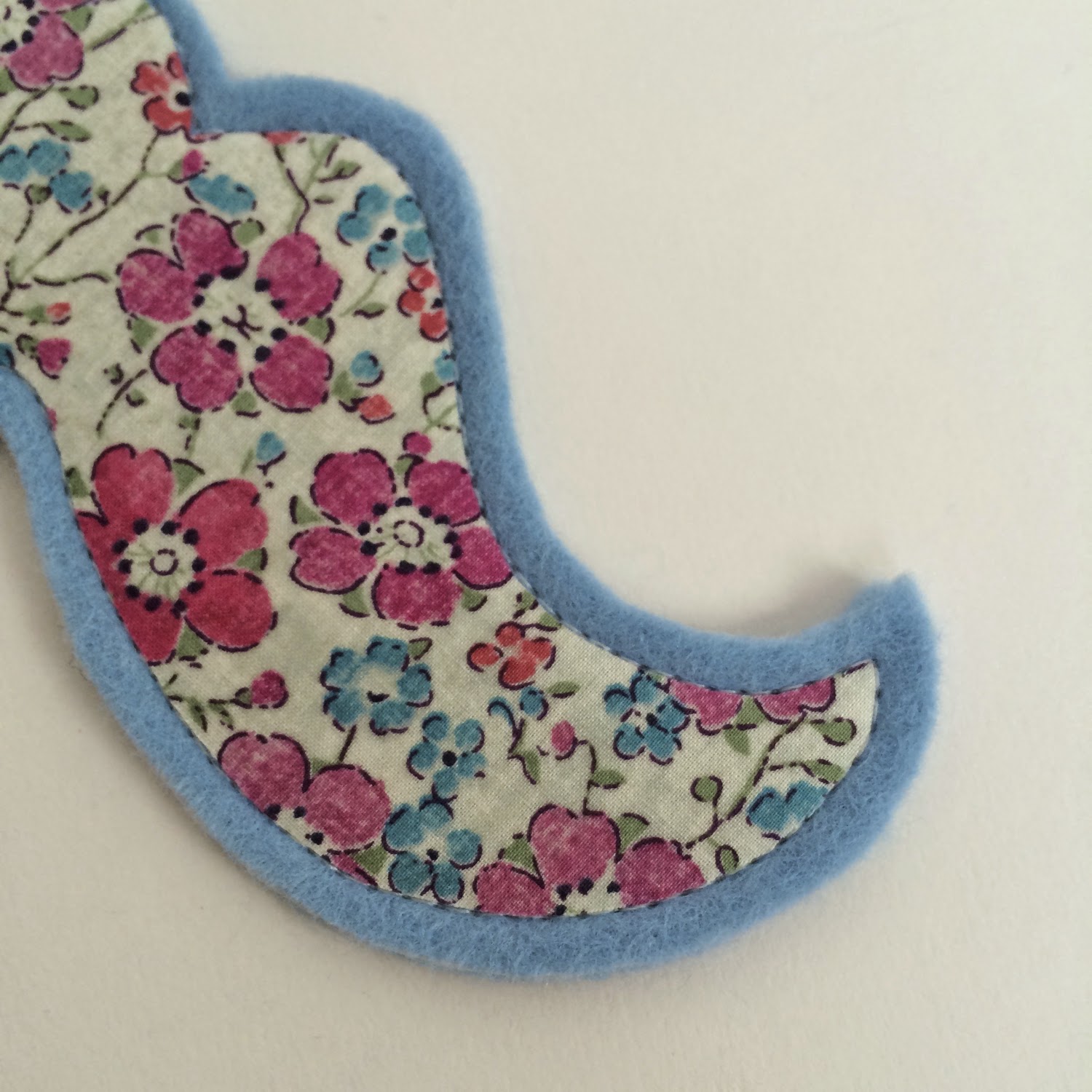 The Big Comic Relief Crafternoon, a special edition of Mollie Makes, will be on sale in Sainsburys and via iTunes and GooglePlay from this Thursday, January 29th. It costs £7.99, with £5 of that going straight to Comic Relief. Please do go and buy a copy if you have the money to spare - you will be rewarded handsomely with patterns for knitted beards, crocheted red noses (so much easier to breath through I'd imagine), wrist warmers, small creatures (who can also be enhanced with miniature facial hair!), and even knickers (for you, not for the small creatures). The magazine also gives you a guide as to how to run your own Comic Relief craft fair if you're interested in selling your own forest of moustaches or luxuriant jungle of knitted beards to furnish the faces of people within your local area. 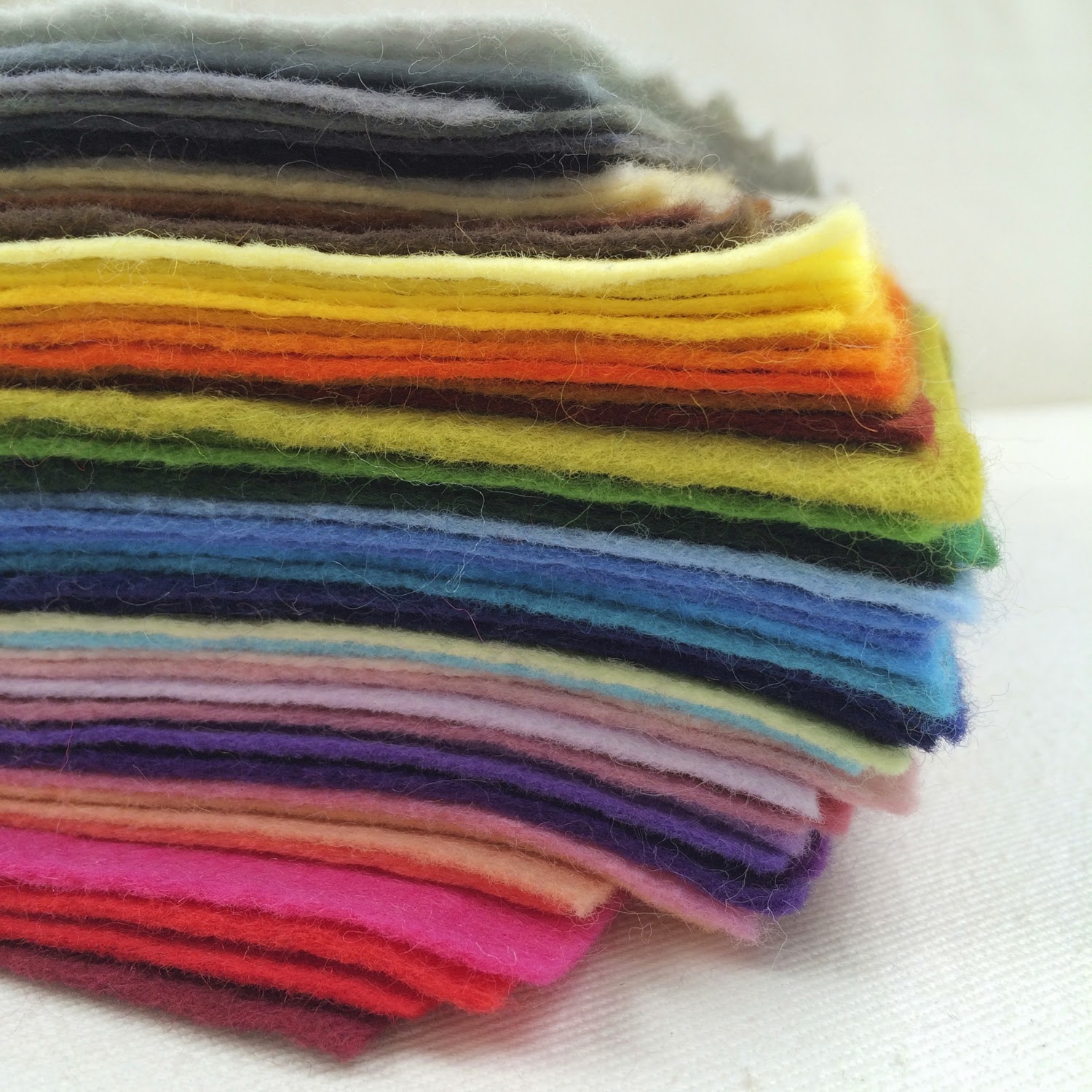 From just the communications that I've been party to, I can tell that, despite their jolly tones and amusing emails, it has undoubtedly taken a gargantuan effort on the part of Emma Mitchell (who some of you may know as Silver Pebble on Twitter), Jane Toft and the Mollie Makes team to make this bookazine happen - so I'd like to say a huge thank you to them for finding such a fun way for craft to become a part of Comic Relief - I feel privileged that my moustache is a small part of that. To make The Big Comic Relief Crafternoon the fundraising success that it deserves to be, I know that Mollie Makes would be delighted if you could share news of this special edition with others. You can follow The Big Comic Relief Crafternoon magazine on Twitter here (@CRCrafts - so worth doing and it's not at all sell, sell, sell, but more, look at this adorable crocheted guinea pig that's actually the size of a baked bean! Yes, literally, a baked bean) or follow them on Facebook.

Yours, at the ready to sprout temporary facial hair and hoping you are too,
Florence x