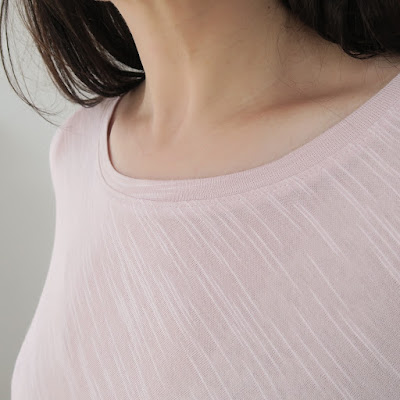 This make is now a few months old and very well worn and it now seems slightly seasonally inappropriate to be sharing old summery photos of it on a day when it's pouring with rain in England - I haven't been terribly good at keeping up with myself recently when it's come to blogging about my dressmaking. It's made from a slub jersey in pale dusky rose that I bought from Lauren's shop - I'm suddenly feeling slightly obsessed by pinks and greys in combination, so it felt like the perfect fabric to pair with grey jeans. I used my own pattern - the same that I'd used to make this top - but I decided to cut the main fabric pieces on the bias this time, not because it needed any help with drape, but more for the visual effect of the slubs going across the body at 45 degrees. Because it's cut on the bias, I sewed with a slightly smaller seam allowance to (lazily!) compensate for the closer-fitting finish that a bias-cut would inevitably give, rather than going to the effort of redrafting my pattern pieces. 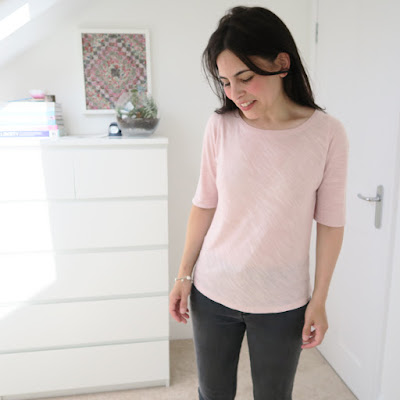 I cut the sleeves in the usual way and I like the contrast of bias and straight grains this gives. The vertical line running down the sleeve is just where I've ironed it as I don't tend to iron regular clothes in the way that I'd carefully press them during construction to avoid that kind of thing (the photos were taken a few weeks ago, a few weeks after making the top)! Just in case you're interested, the fabric has worn really well apart from a very slight bit of bobbling where I wore an across-the-body bag to go on a long country dog walk, but I'm not convinced that's unique to this fabric though - I don't know what it is about wearing bags in that way, but a leather strap worn on the diagonal seems to rub at fabric far more than one worn on the shoulder, so I usually avoid it. I'm slightly cross with myself for putting bag carrying practicality above fabric preservation on that day when I love this top so much! 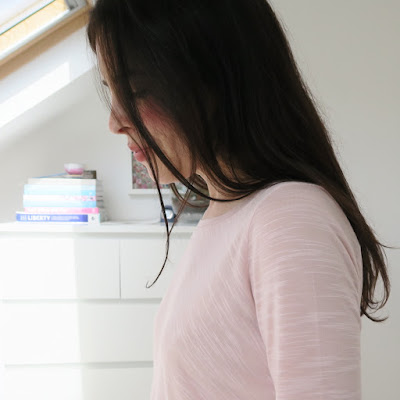 Sometimes a static picture doesn't really show the drape, so below is a photo that's still static, but where I'm less static within it, which gives you an idea of how deliciously waterfally this fabric is - do hurry to buy some - it's really, really lovely! And ridiculously inexpensive - this top cost less than £7.50 to make. The fabric shrank a fair bit when I pre-washed it and felt curiously like cardboard when I took it out from the washing machine, but it returned to soft loveliness as soon as it had dried. I made this top out of a very shrunken metre and had left-overs to spare. I'd worried that cutting such a fine fabric on the bias could cause all sorts of craziness with the hem, but I was surprised to find that it behaved perfectly. It's also available in navy. 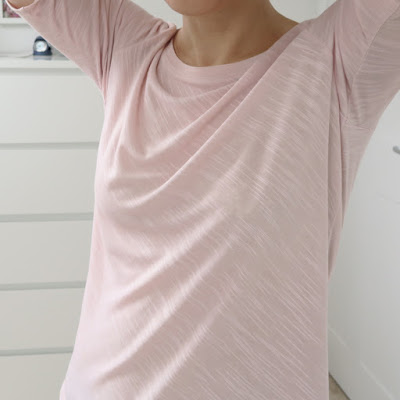 Although I've spent quite a few years making clothes, I don't think it's been until this summer that I've chosen to wear the things I've made more frequently than the off-the-peg garments in my wardrobe and it's come as a lovely surprise to finally feel my own handmade clothes are just as appealing to me as shop-bought alternatives. I've been trying to think about what's brought about this change and why things have suddenly clicked for me and I think it's down to several things - some of them practical, some of them attitude.

Previously, often I'd make something and be pleased with the way it was finished, happy with the style of the garment, but somehow it just didn't feel as come-and-wear-me as my shop bought clothes - they felt home-made, rather than hand-made and I couldn't put my finger on why. But I think it's possibly down to gaining more experience in matching a fabric to a pattern and also there being so many more amazing dressmaking fabrics easily available now, so no longer having to make compromises on this.

I think the other reason why I feel happier wearing my handmade wardrobe this summer is that there's an element to dressmaking that used to feel like wrapping oneself up as a present with a bow on and announcing over a loud tannoy: this is me - not just me as a body, but also me wearing parts of my soul on the outside of myself! If you're not actually that confident about the way your body looks (which I wasn't), that extra layer of vulnerability can leave wearing a wardrobe of handmade garments feeling a bit much. Many sewists site dressmaking as being a liberation, as they cast off the sense of oppression they'd felt trying to fit into a particular shop's dress size and make things perfectly tailored for their shape. Despite the fact that standard shop sizes are rarely a good fit for me either, I didn't really experience a sense of liberation when I initially came to dressmaking and always wondered why - maybe the difference is whether the self-consciousness comes predominantly from within or from external pressures (i.e. clothing sizes, unrealistic magazine images, cultural perceptions of different body shapes), I'm not sure.

But either way, something this year has clicked into place for me: maybe it's age (I think the way that many women begin to feel more happy in their own skin as they get older is proof that the way we feel about ourselves has very little to do with the way we actually look); or my finally realising that weighing oneself each morning is a habit that doesn't add any real value to the day; or my finally pinpointing exactly which foods I have horrible reactions to and so now rarely having to contend with unpredictably swollen eyes/face/stomach, but I just don't feel self conscious in the same way that I have for most of my life, even though I am heavier than I've ever been. And with that comes a new-found happiness in wearing my own handmade clothes.

It may seem surprising that I've felt any self-consciousness at all when I've kept a blog where I've always shared photos of clothes that I've made. And me wearing those clothes. It's never been something that I've felt entirely comfortable with, but I suppose my wish to do it was greater than my reservations that would have made me choose not do it. From the moment I read Heather Bailey's blog, nearly nine years ago (the first blog I'd ever seen!), I found that a format that allowed the combination of writing, photos and sewing appealed to me in a way that was almost impossible to resist. And as my readership is mainly sewists (although sometimes I find that people who don't sew at all read it, and that's always really lovely), when I first began sewing clothes, it made sense that I would document them. In the company of other sewists, whether it's quilts or dresses, I think we tend to want to see everything from different angles, to see how the fabric has been cut or a zipper installed, and to see photos that inspire us to actually want to spend an evening sewing, rather than watching television, which is always a tempting alternative if sufficient propulsion to get up off the sofa and sew isn't there. So in this context, to me, sharing photos of yourself wearing clothing that you've made seems perfectly normal (at least it does to me when others do this), rather than narcissistic or indicative of being totally body-confident.

So all those things were already falling into place when I was going into a changing room in a lingerie shop while wearing this top and the shop assistant, twenty years younger than me, beautiful and very stylishly dressed commented that she loved my top. I just said 'thank you' but didn't offer any more as my mindset up until that point had always been to avoid telling someone that I'd made something myself, other than within the confines of my blog. However, she then asked if I'd mind telling her where I'd bought it as she'd love to get one herself, which forced me into confessing that I'd actually made it myself. Her reaction was so incredibly lovely and she seemed so genuinely astonished that it was handmade, that as I closed the curtain of my changing room I felt as though I could audibly hear my brain realigning with the affirmation that something I'd made didn't look any different to something shop-bought, other than in a positive way. I think this completed my transition to wearing handmade without self-consciousness and not worrying to think what other people may think of my clothes. I now seem to put them on in the same way that I do my shop-bought garment: because I like them and that's what I'm choosing to wear that day. The shop-bought and the handmade are finally integrated for me and it feels a very happy thing.

I'd love to know how you feel about wearing your own handmade clothes - whether it feels like an entirely positive thing or whether it's mixed up with a slight self-consciousness for whatever reason.

Ps. Coincidentally, I listened to not one, but two, fantastic podcasts with Jenny, from Cashmerette, about body image and dressmaking last week! The first on Crafty Planner, from the July archives, the second on Seamwork, the brand new podcast from Colette Patterns - both were really interesting and well worth listening to.