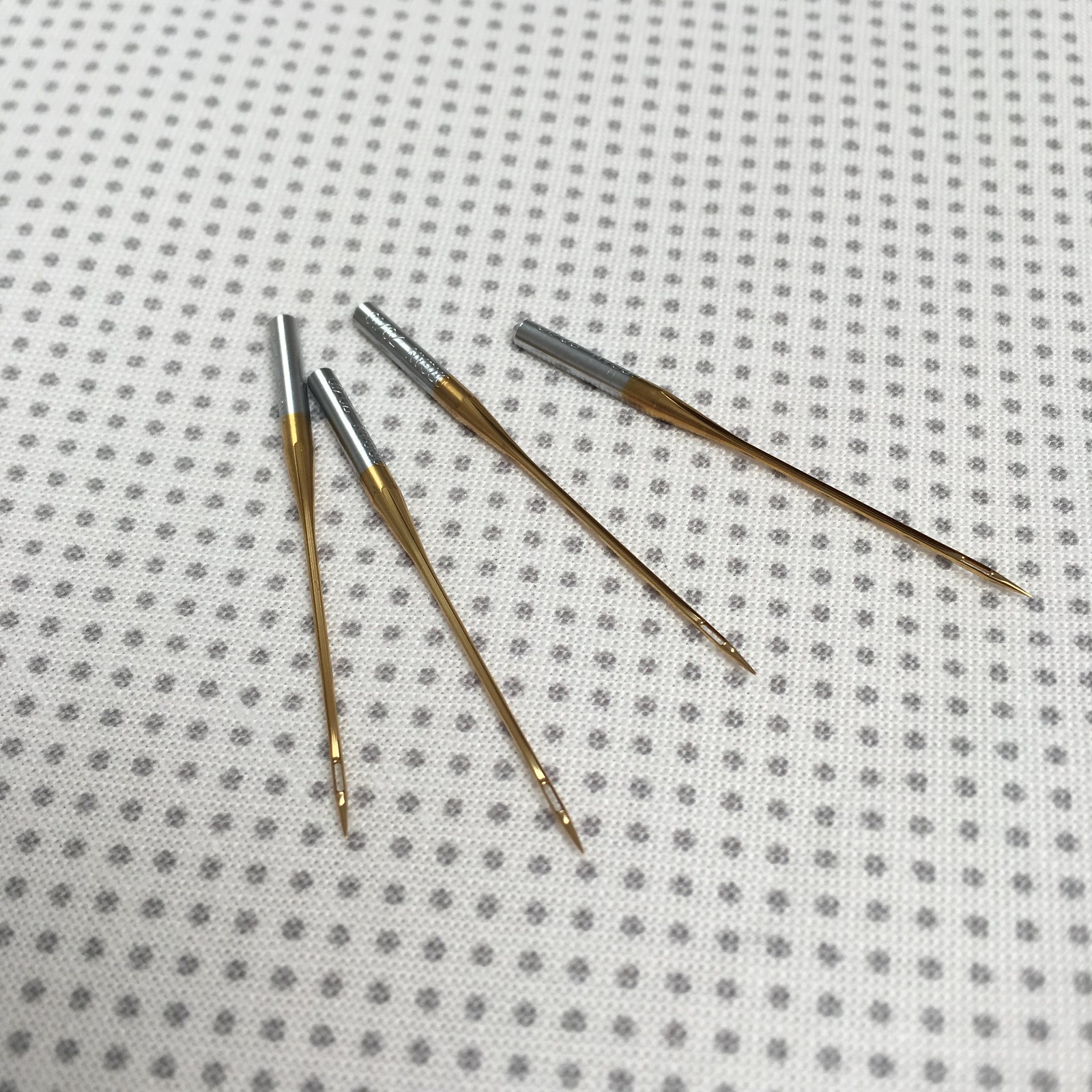 This post is a bit of random collection of things, but I'll start with the photograph above: titanium sewing machine needles. Last week, I took my daughter's sewing machine in to be repaired (she has my old sewing machine, which I talk about more here, back in 2009 - I loved this machine so much that it's really lovely to now having it living on her desk (rather than in the cupboard) since she began her textiles GCSE last year. Anyway, when I took it in to be repaired, the engineers were horrified by the titanium-coated needle that was in the machine and I thought it might be worth discussing here as I was quite surprised by their reaction.

The benefit of titanium-plated needles is that they tend to last much longer than regular needles - their coating means that the point stays sharp for eight times as long as a chrome-plated needle! I also don't feel they break nearly as often as regular needles. However, the engineers I was chatting with claimed that sewing machine needles have been developed to break the moment they run into trouble in order to avoid damaging the machine and causing expensive repairs - they felt that this wouldn't be the case with a harder titanium needle.

In the course of writing this blog post, I've read up on these a bit more and found that the brand I use (Superior Threads) claim that the tensile strength isn't actually increased at all by the titanium coating...so now I'm torn. I wondered what other sewers feel about this? Do you use titanium needles in your machine? Would you? 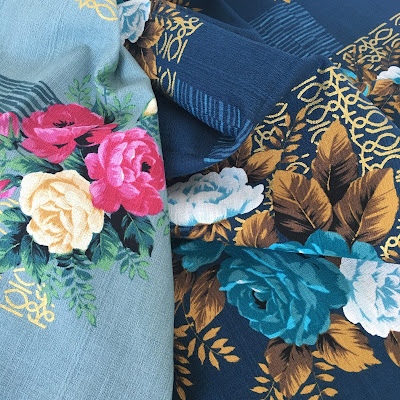 In other thoughts: insanely beautiful Gertrude Made barkcloth fabric. I don't think this has landed in the UK shops yet, but if you've been impatiently stalking the virtual isles for it, then I have some in my Etsy shop from my own stash that I purchased from Australia a few months ago (yes, you can only imagine the import bill on that one...it's always so much worse than I optimistically imagine it might be at the point of purchase). Either way, I think it's going to retail at £28 per metre in the UK, so these cuts offer a hefty saving if you'd like to make a quilt from them and I've set postage at a penny (for some reason, I can't offer it free), as I have no idea quite how much it will be, as the hefty stack of barkcloth is too heavy for my kitchen scales to calculate, so I'll cover the costs of that. You can find them here. And you can see inspiration for how they might work as a quilt here. I may destash some other fabric over the next month to carve some space in my sewing room drawers - I'll let you know when I do! 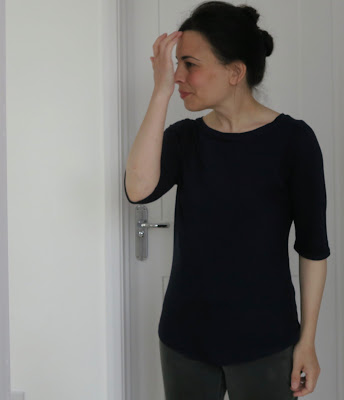 I don't think I shared this top with you when I made it last year, but I put it on this morning and took a quick photo of it before going about my day and only realised later that I was clearly brushing an invisible hair out of my eyes at the time, although in reality it looks more like I'm enjoying revisiting a particularly delicious-smelling handwash. Either way, I seem to remember that when I made the top last year, there was something I didn't feel was quite perfect about it, but when I put it on this morning, I couldn't identify what that might have been, so have been happily wearing it, impervious to its flaws. It's made from a navy slub jersey, that I think came from either Guthrie & Ghani or The Village Haberdashery. Neither has it now, but they do have some other slub jerseys in stock.

It's the same self-drafted pattern that I used for this and this top. I also made my sister one, identical to that of the second of the two 'this' links above. It's definitely my favourite pattern and I have another few versions planned for this summer...which may make for some dull blog posts ahead. Brace yourself! If only blog posts were scratch and sniff and then I could at least make sure to use a variety of delicious hand creams to enliven the accompanying photos (while we're on the subject - this one is currently in my handbag and smells amazing. Hand-cream-borrowing seems to be a regular activity whenever I'm out with friends/daughter/sister/mother-in-law and this one is loved by all who use it).

Finally, I'd like to introduce a new sponsor, ECT Travel, who organise quilting tours around the world, from the UK - I was really tempted to go on their tour to Nantes in April, but had deadlines to meet at the time, so couldn't. But if you're interested in future quilt-related travel (which makes it sound like they wrap customers in quilts and then propel them through the air in a quilty version of a flying carpet, but I think in reality it's probably a bit more conventional than that and involves planes and coaches), do go and take a look.