From Brush to Needle 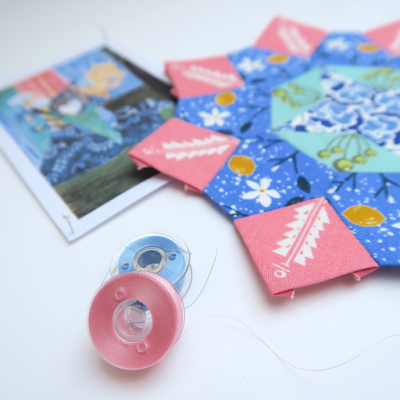 I'd said in my last post about my latest English paper piecing pattern, Eight Dials, that I'd show you some of the blocks for another version that I've been working on - as promised, they are completely different - it doesn't even look like the same pattern. I wanted to explain my thinking behind these blocks, so bear with me - there are lots more images later in the post!

A few months ago, I came downstairs to show my husband the latest block that I'd sewn. It's nice, he said. I think most students who travelled through the English education system will have had it drummed into them that 'nice' is a forbidden adjective, lacking in imagination and permissible only at times when one is totally unenthused by something. Despite, at that point, feeling like a rather reluctant and weary sort of fish, I took the bait and asked him what the problem was. He suggested that the thing I'd just made was similar in colour and style to most of what I'd made over the past year (for a Secret Project, yet to be shared here). But I LOVE those colours, I replied. I use them a lot because to my eyes they are the best of colours; when I open my fabric drawers, they're what I feel drawn to pull out.

My husband put down his laptop and lay back on the sofa - a signal that he was either about to fall asleep or give me his COMPLETE attention. On this occasion, it was the latter. He broke it to me that  the problem with always using similar colours, no matter how much you love them, is that you risk stagnating, becoming bored and eventually failing to move forward creatively. I saw his point, even though it was slightly painful to hear. But I found the idea of using a totally different colour palette uninspiring - why would I use colours that I don't truly love? And also, maybe, a little overwhelming.

Next, he said something wise and then something extremely practical and helpful. Together they made this one of our Favourite Conversations Ever, because it felt like I sat down with one mindset and left shortly after with one that was totally refreshed. He first told me that he thought people were often able to be more creative when they had constraints placed on their work. He explained that when he used to have clients (in a previous life, my husband was a web and games designer), having a brief to stick to was actually a springboard to coming up with an exciting design. Mmmm.

So how do I put constraints on my work, I asked (because why think for yourself when you have your own Wise Man suddenly lying on the sofa)? He suggested that I could base each block for a quilt on the colour palette of a painting that I really loved. The conversation had gone from uncomfortable, to thought-provoking, to finally a level of inspiration that saw me haring off upstairs hungry to wield a rotary cutter and leaving him perfectly positioned for an afternoon nap.

An afternoon looking at Matisse's paintings in The Hermitage, St Petersburg, while in Russia with my sister, planted a seed that has left him as one of my favourite artists and so moments later I was printing out one of his paintings and matching up fabrics. The dilemmas that would normally bring my work to a standstill disappeared, entrusting those decisions on Matisse's magical hands (it helps to pick someone's work who you really love, so that you trust them entirely on these matters). It was possibly one of the most invigorating afternoons of my sewing life to date. It made me look not only at the painting differently, but my whole fabric collection. My Eight Dials pattern allows for four fabrics to be used in each block and it was immensely satisfying to try and find fabrics that each contained a few specific colours so that all of the colours in the painting could be represented. It was also unusually speedy and free-flowing - I decided on my fabrics in less than 1.5 hours...something that has previously been known to take days! 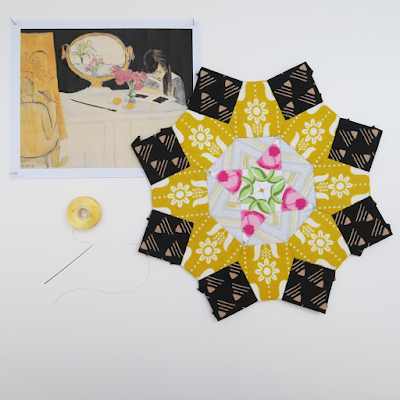 This block is based on The Painting Lesson, 1919. Here, the pink roses and green vase are represented at the centre of the block; the grey of the girl's shirt appears in the next round; the yellow of the artist, canvas, lemons and mirror and the cream of the table cloth are represented in the penultimate round; while the black background, the girl's skin and the highlights in her hair are revealed in the final squares. They're not colours I would have chosen to put together - I have always avoided mixing pink and yellow - but I adore how this block turned out. 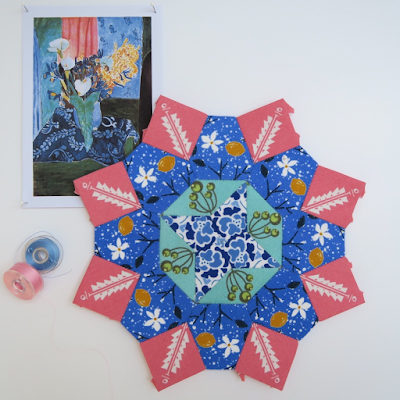 Next, Calla Lilies, Irises and Mimosas, 1913. The central blue print represents the backdrop of the painting and also the style of the design that appears both there and in the table cloth; the greens (light and dark) are represented in the next round (although the darkest green not in the qualities that I would have ideally liked); Next, some more blue to bolster the vibrancy of the earlier blues and also to give a smattering of white found in the calla lilies and the yellow found in the mimosa; finally the coral swathe of fabric that appears in the background is picked up in the outer squares.

It's interesting to take a photo that blurs both the block and the painting, as it's here that I can see whether I've achieved what I was hoping for. 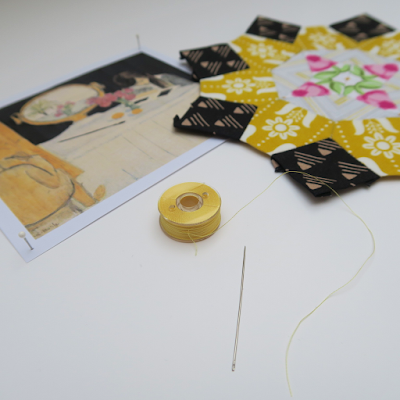 I'll post some more blocks once I've had a chance to photograph them - these were taken shortly because the light started to fade this evening. I'll also show you the colours I'm intending to use to connect them together.

If you'd like to join me in an artist-inspired version of Eight Dials, I'm using the hashtag #frombrushtoneedle over on Instagram. And if you missed it and are interested, you can find the pattern here.

Over the summer, I'm visiting the area around Nice in France - Vence is home to some of Matisse's stained glass windows and there's also a new exhibition opening at Musée Matisse in the centre of Nice - super-excited would be an understatement! We stayed in England last summer and although we had some wonderful time away, I'm looking forward to being abroad again.

I'm wondering if anyone is familiar with the area around Nice and knows of some good fabric shops? Dressmaking or quilt-making? And maybe some vegetarian restaurants?