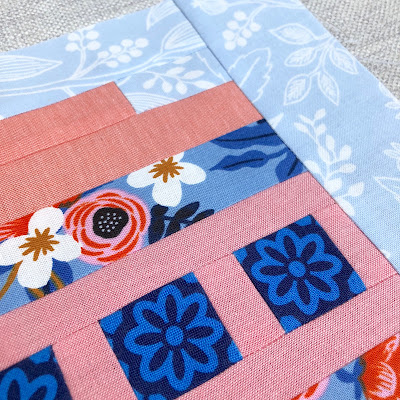 You might remember that at the end of this post, I mentioned that Jo Avery would be doing a block of the month quilt pattern, called Vintage Home, which unfolds over the course of twelve issues of Today's Quilter, revealing a new piece of kitchen paraphernalia each month and that Jo had invited me and a handful of other bloggers to sew along with her. I claimed February, whose theme is storage caddies, mainly because I'd requested a month that wouldn't challenge my foundation paper piecing skills (which are minimal), but also because I am one of those curious people who loves decanting things into pots different from the ones they originally arrived in, so as a theme, it appealed.

I hadn't actually realised that decanting things into different pots and tins wasn't something that everyone did as a matter of course until a few years ago, when my mum was working in my kitchen and commented on it as being a trait I must have inherited from my grandmother. Since then, I've been scanning family and friends' houses for signs of decanting and found that it is indeed a rarer activity than I'd initially assumed, unless decantment is a guilty pleasure that they're hiding behind cupboard doors. I wonder if it's a thing more likely to be something that makers do though, as though we've subconsciously decided to replicate the joy of the button tin (even in a blind rush mid-dressmaking, opening a button tin still registers with me as feeling totally magical) in every area of our lives? I have a sense of this being a feature of photos I see posted online, at least in people's sewing rooms.

Anyway, upon realising that decantment wasn't a universally-experienced habit akin to breathing/having a shower/wearing shoes, I began to wonder if what I was doing was just one step away from putting a knitted doll cover over loo rolls (for the uninitiated, Google images can enlighten you). Was it really pernickety to be putting everything into nice tins? I decided that if most people didn't do this, then maybe I should trial it to see what it was like. I packed away several tins and began to leave washing tabs, dishwasher powder and teabags in their branded packaging. My main conclusion: it was certainly quicker.

Since that time, I've not really reinstated receptacles in those areas, although I miss them, so maybe I should. When I stopped to think while writing this post though, I realised that in the intervening years, I've transferred my obsession onto baskets, which I love and which, on analysis, maybe feel a bit more carefree for their lack of lid: Oh look, a basket that I can casually sling things into! I have water hyacinth baskets and coloured woven boxes for dog toys; laundry; electrical leads and camera paraphernalia; my hairdryer, brush and other hair-related things; table tennis rackets and balls. And then handmade rope bowls everywhere, which hold pairs of glasses, photos, pens, loose change (not mixed - each has a dedicated purpose...there is no need to go completely mad just because a basket doesn't have a lid).

Anyway, I think, wherever my experiments have led me over the last few years, I have a fundamental delight in storage tins and baskets, so onto Jo's lovely patterns for this month: storage caddies. There are actually two patterns (see Jo's blog for the sugar caddy) - here's my version of the tea caddy. 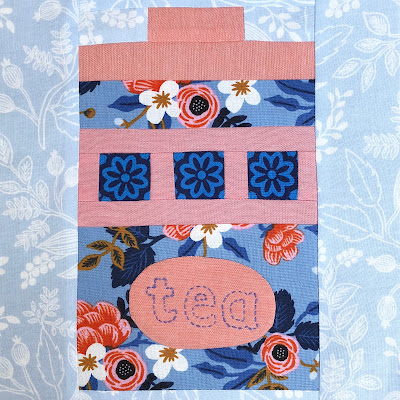 Faced with a list of squares and rectangles to cut out, I find I often make mistakes while measuring, so before I began I quickly drew up and labelled little templates on my computer for all the pieces needed (just as easily done with paper and pencil though), so that I could relax and not have to think too much while cutting the fabrics. 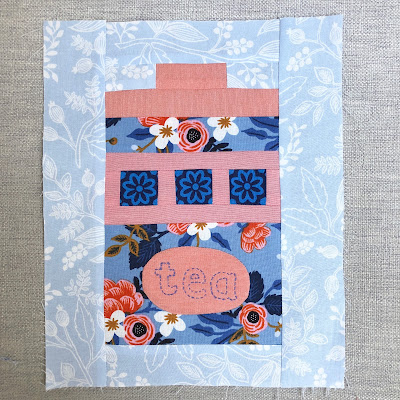 This is a sweet pattern, as there's room for some fussy cutting, as well as combining lots of patterns and prints. My main prints are Anna Bond for Cotton + Steel, with the plain fabrics being Cirrus Solids from Cloud 9 (they're shot with a different colour on the warp and weft, to add a bit more interest).


Piecing together the smaller squares and borders, my feed dogs kept attempting to eat the fabric and, for reasons which will be explained later in the post, I felt too muddy-headed to investigate or change over to my single stitch plate, so it was more easily solved by starting off each line of sewing with a small piece of tissue paper beneath the fabric, which could then be torn away - it's a quick fix if you ever find your sewing machine doing the same (mine doesn't usually). The pattern was fun to sew and it was easy to piece together just by following Jo's photo, although of course, there are full instructions. 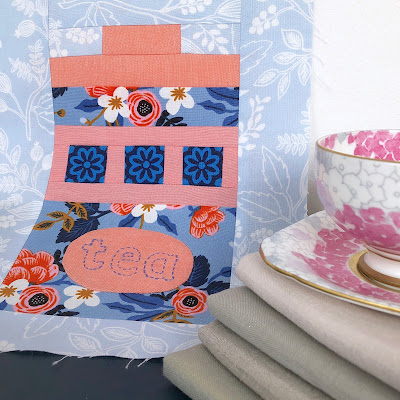 Returning to the muddy-headedness, I had been racing to finish this before the migraine, which I could feel hovering menacingly in the wings, crashed in. The moment I'd finished sewing, I went to bed, where I stayed until the next day.  I usually really struggle with migraines because I'm not very good at doing absolutely nothing, but I'd happened to read Kerry's post that morning, mentioning that she was listening to the audio book of Eleanor Oliphant is Completely Fine, so I downloaded it and then lay in the dark drinking it all up. Eleven and a half hours later it was finished. It is both incredibly funny and painfully sad and, having listened to it is an audio book, like Kerry, I felt the narration added a lot to it too. I now feel like I would have missed a whole layer of it I'd read it as a book - it must be such a nice feeling as an author when your book is narrated by someone capable of adding an extra dimension to your work.

I think an audio book's strength is partly in the narration, but also on how easy the story is to follow when you can't flip back a few pages to check the name of someone or, horrors, if you zone out for a moment and realise that you've missed a paragraph or a whole page's worth of reading!

Have you listened to any good ones lately?

Ps. Kerry did the previous month's Vintage Home BOM quilt along, which you can find here, if you'd like to see her lovely fabric choices.
Email Post