Templates and Precut Papers for EPP (and, as always, some random thoughts) 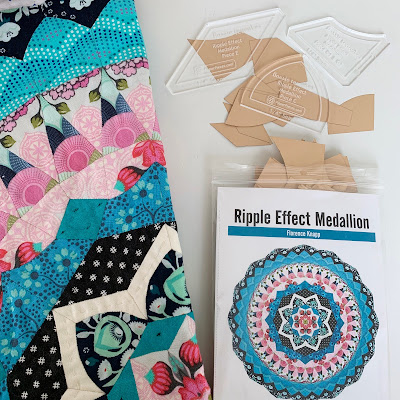 Just a quick post to let you know that there are now acrylic templates and precut paper pieces available from Paper Pieces for all the patterns in my book! Although I've always seen scissor-cutting paper pieces and creating my own templates as part of the process, I know for many this is a deal breaker with English paper piecing, so I'm really happy that these are out there. And actually, now I've experienced the ease of having them ready-made, I can see myself becoming a convert too.

I found the process of these pieces being created really interesting and when the samples arrived for approval, as someone new to using templates, I suddenly had lots of questions. I thought I might share a few of them with you here, just because I found it really interesting to discover the answers, and also because it may help you when it comes to using the templates if you're new to them too.

Q1. Does there have to be a brown backing on the templates? I'd find them easier to use if they were clear. This question ended up being a marginally embarrassing one to have asked, as the backings are actually really easily removable to leave beautiful clear templates like the ones at the top of this post - they're just there to protect the templates during transportation (this is similar to the time I was left not feeling overly enamoured by our new bath's lack of shininess, only to discover it had a fine plastic protective coating on it). If you don't fussy-cut fabrics and like a delicious surprise with each cut, you can leave the backing on as they probably give the templates a little more grip, but otherwise, just peel them off (yet to be peeled off in the photo below. Fully peeled in the top photo). 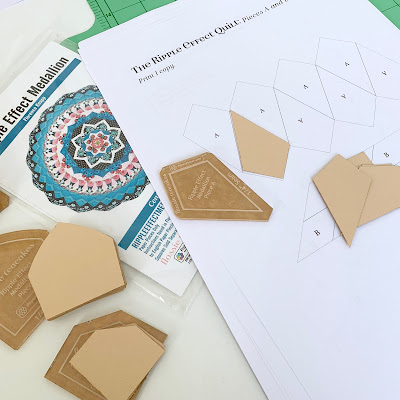 Q2. Why are the ends of some of the acrylic templates squared off, as with the kite shape above? Apparently some templates that go to a point can be really sharp, so PaperPieces cut them off to stop them from poking at people and also to stop them from sneakily cutting free of their packaging! As the squared off bit is so small, it doesn't interfere with using them as you would if they were still there when it comes to rotary cutting around them :)

Q3. Why do the paper pieces have to be on brown paper?  Several years ago, I'd looked into getting paper pieces cut, but I found when the company who cut those pieces for me sent some samples over, the laser had left unsightly burn marks on them and they looked really grubby as a consequence. It turns out Paper Pieces use brown paper for that very reason - although the laser burns are still there, they don't look or feel grubby on brown paper. Such a brilliant solution. (Nb. more standard shapes are die-cut, avoiding burn marks entirely, which is why you'll sometimes see shapes on clean white paper).

Interesting other points of note: 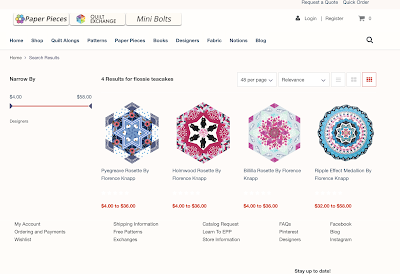 When my samples arrived a few months ago, seeing the templates unexpectedly etched with Flossie Teacakes was quite a lovely moment. Similar to getting Moo cards delivered, it just feels nice to have your name printed neatly on anything that's one-step removed from yourself, as though you exist in another form, neatly packaged, more professional, and almost certainly more well-coordinated in an aerobics class than the creature that exists in reality (for the record, I no longer attend aerobics classes as it presented a hazard to the other participants to have someone who constantly interrupted the flow of movement from left to right and introduced an unfortunate 'human pinball' element to the workout). If you've never had your own Moo cards printed by the way, I'd advise you to do so, even if you only ever keep them in your own desk drawer and take them out to look at them from time to time - they're the best stationery you'll ever own and that little box full of cards seems to represent so much potential. Whether that potential ever becomes a reality isn't necessarily the important part - it's the possibility that matters. I last got some mini cards printed in 2012 when I ran my little shop site, Made by Florence, and I think I may have just have unexpectedly talked myself into getting another set made (blog posts are always meandering things...who knows where they'll end up).

Doubly exciting for me with my templates was that this was my very first non-paper item I've ever had my name on - it actually says Flossie Teacakes on them, rather than Florence, but it represents the same thing to my mind. If you grew up with a less obscure name than mine, you may have been lucky to regularly find your name on items in gift shops, but I was disappointed at every stand of key-rings, bookmarks and door signs I ever came across. We spent a lot of time adventuring with family friends when I was young, and I was always left feeling wobbly-lipped and covetous whenever the other children emerged from a shop or museum with a named item. If only I'd known that, aged 41, I'd finally get my name printed on a useful product related to my favourite-most EPP, I may have borne it with more grace. As it was, aged 6, I scowled and muttered dark thoughts to the small pig I kept in my bag. I modelled myself on Lotta at that point, so every pig I owned (and as a passionate vegetarian, I kept several) was named Bamsy, just like hers. The Lotta books were the less-well-known series of books written by Astrid Lindgren, creator of Pippi Longstocking, and I still adore them now in a way that I never really have with Pippi. Pippi was a different kind of character altogether and I found her slightly baffling, while Lotta's angry-at-the-world, youngest-in-the-family wilfulness was entirely relatable. I often wonder how much influence books have in forming a child's character at that age and if I identified with Lotta and Josie (from The Bossing of Josie by Ronda and David Armitage) because I saw myself reflected in them or, more worryingly, if I grew more like them because I admired them and their bold ways! Later, it was Flossie Teacakes who made an impression on me (that probably goes without saying), followed by Anne of Green Gables, who ultimately proved to be a more levelling influence. Were there any book characters who had a particular impact on you when you were growing up? Or even as an adult?

Ps. I've often wondered how I used to write blog posts so often. Now I know: they were shorter. Sorry to anyone who'd braced themselves for reading this with a fresh cup of tea and then found themselves left with a half-full cup.
Email Post