An Uncertain Trip Around the World 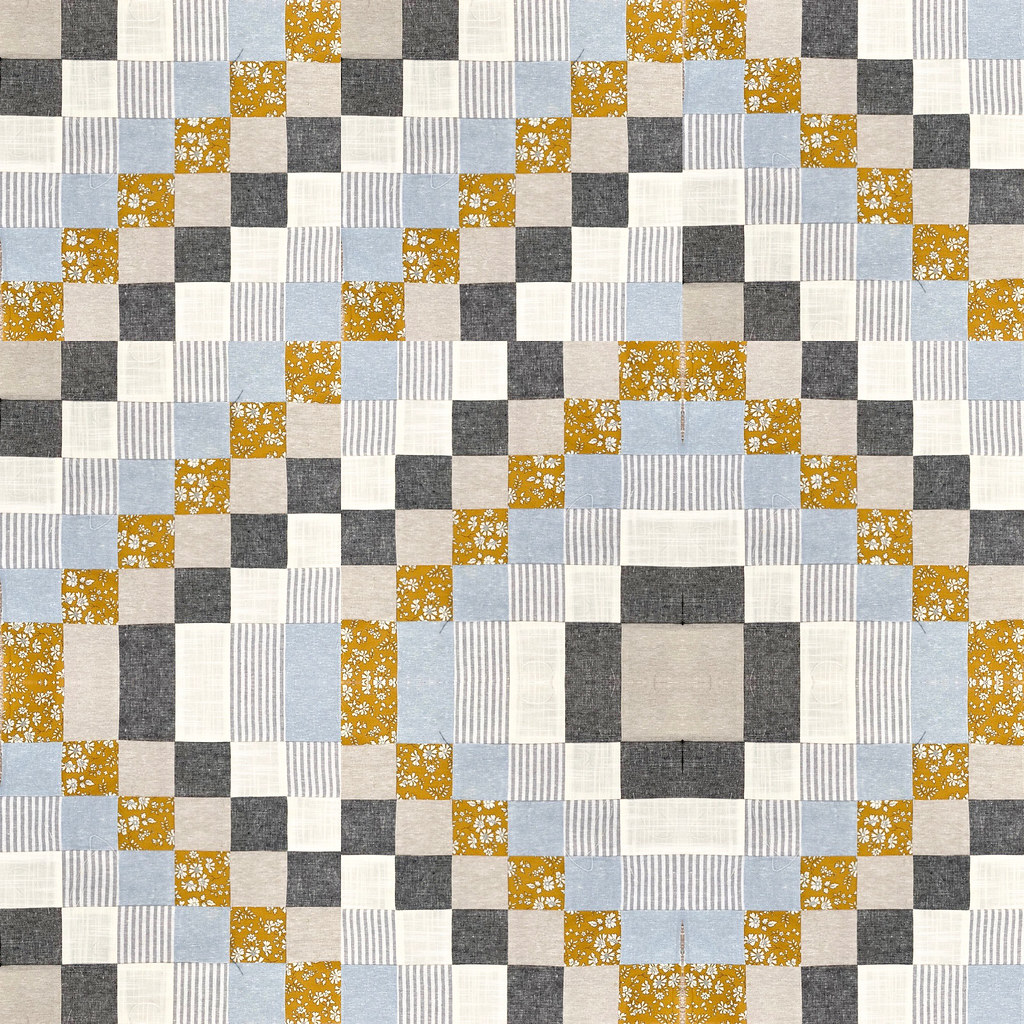 The last time I used the Scrappy Trip Around the World Pattern was in 2013 when I made a Liberty print dog bed for Nell (do click through if you want to see the extreme testing process she subjected that bed to. Oddly, it ended up being the only bed that was truly indestructible when she was a puppy and, despite her best efforts, all those lines of quilting made it freakishly strong. Looking back at this makes me realised what a semi-civilised little creature she's become - she would never try to eat her own bed now).

The eagle-eyed will be relieved to know these finished blocks aren't actually sewn together yet, but it gives you an idea of the World Tour I'm on right now. If I were to send you a postcard at this point, it would probably say that I'm not entirely sure I like the place I've ended up in - I've struggled with this palette a lot, which is a mixture of linens, striped linens and Tana lawn. I chose them because I thought they'd work in the room where I want the quilt to live, which has lots of different shades of yellow and mustard in it but somehow doesn't feel like a room with lots of colour (the colours seem to register as neutrals), so when I chose the fabrics for this I went for far plainer things than I'd ever usually choose for a quilt...which I'm now finding rather dull to sew with. I'd imagined the texture of the linens would soften it all and make it feel like fun to work with, but I'm not sure they've actually had that effect on me. 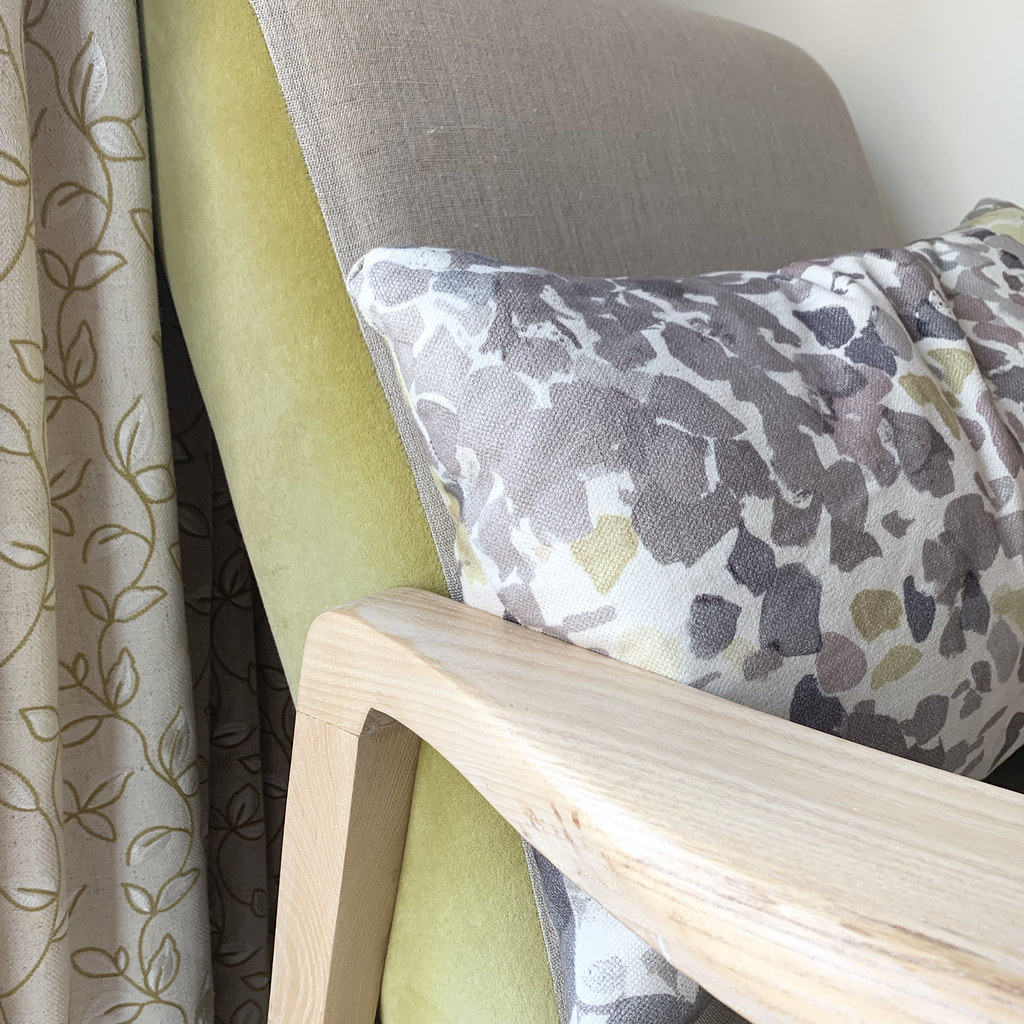 I'm finding it hard to separate the dullness of the sewing process with whether I actually like it as a quilt. My husband and daughter love it, but I'm finding it more masculine than I'd intended and I'm not sure how to soften it - here a few blocks laid out on the sofa where it will live. 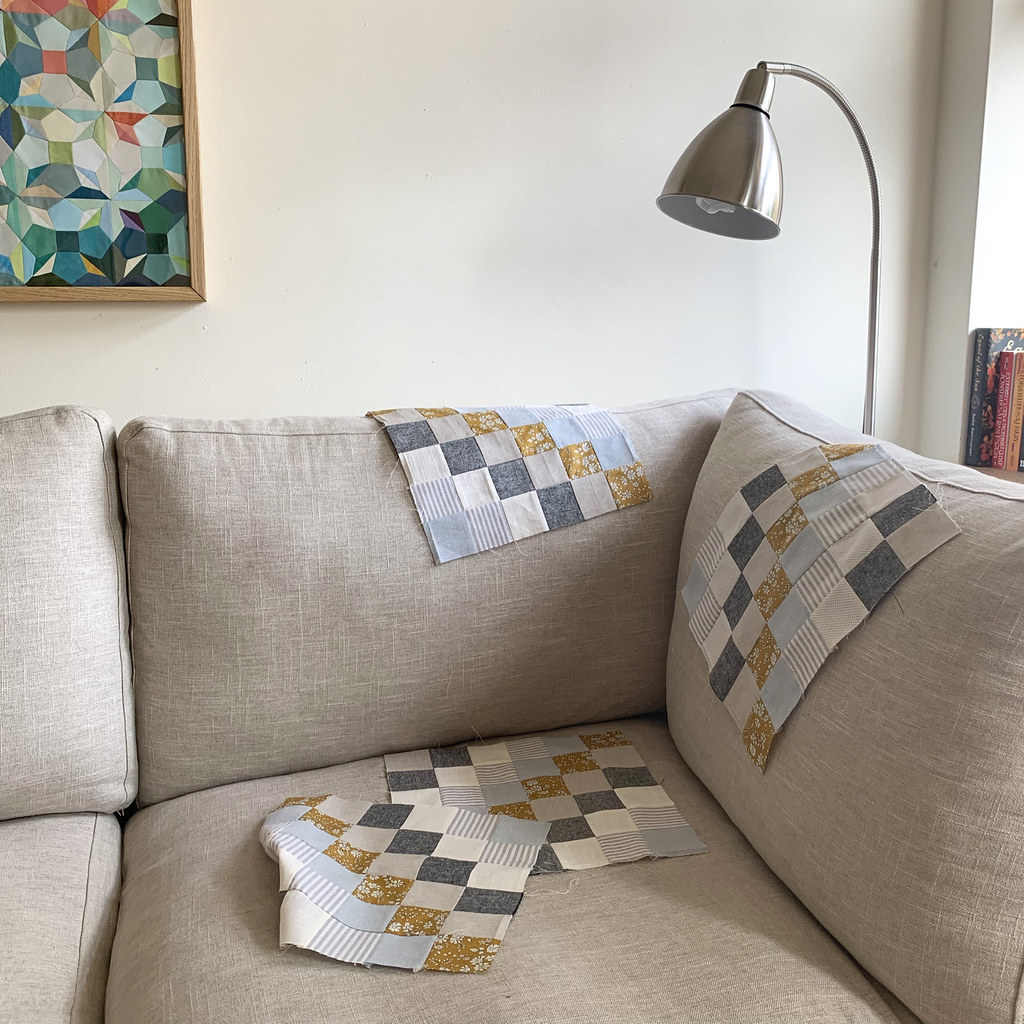 Despite my making a quilt for this room, it isn't currently quiltless...it's just full of the wrong quilt. I think I've talked before about how my husband favours using the bright red Charlotte Barlett quilt (ignoring that it was made as a garden quilt) claiming it's more comfortable to lie under than any other quilt, but its brightness has the effect of making me feel I've had the colour equivalent of a slap around the face with a wet kipper every time I walk into the room and, even after a few years of seeing it on the sofa, my eyes never seem to adjust to how garish it looks against cream walls.

In the planning stages of this quilt, I realised if my husband were to accept a replacement, it would have to be so irresistibly snuggly that the red quilt would begin to seem almost unbearably scratchy and cold by comparison. Installing a layer sandpaper and ice packs would be one strategy, but ideally I wanted to achieve this feat without causing him discomfort or sabotaging the red quilt for garden use (although the ice packs could totally work in the event of a heatwave).

Just before Christmas, I was ordering some things from Billow Fabrics and decided to put a fat quarter of sherpa fleece in my bag, wondering if it might be suitable as a quilt backing. When it arrived, I found that it wasn't just suitable, but was actually the fabric of dreams. It's incredibly soft and fluid, with very little bulk, but somehow feels spectacularly sumptuous. I feel almost certain that if there is a fabric that can tempt my husband into abandoning the red quilt, it is this one.

But when I went order some more I found it had all gone and didn't seem to exist elsewhere in the UK - if you wish to create a visual image to represent the inner workings of my head on discovering that, just picture The Scream and you're pretty much there. I got in touch with Jenny and found she hadn't been intending to get any more in stock until next Christmas (more Edvard!), but she very kindly offered to order a roll in for me so I could buy some without waiting all year. In case you're wondering, she did this without my relaying the tale of my husband's improper use of the garden quilt or my conveying any profound desperation in the email - it was just exceptional customer service - I was so happy!

I'm imagining using it without any batting, as I think the sherpa will fulfil the purposes of batting and backing in one, which makes it extremely cost-effective. I'm not sure what it's going to be like to work with in terms of quilting - I worry it may be a little eel-like, but I'll report back. Either way, at this point, I'm very excited about it! Does anyone know how much cuddle fabrics shrink? Should I wash it beforehand, or will it be fine to wash afterwards with just a normal amount of welcome quiltcrinkle occurring?

If you haven't come across Billow Fabrics before, do go and take a look - they have lots of lovely linens (including Liberty linen, which I've only just noticed!), a wide variety of cuddle fabrics, gloriously coloured wool felts, and Liberty fabrics (which was probably what I was ordering when I spotted the sherpa). 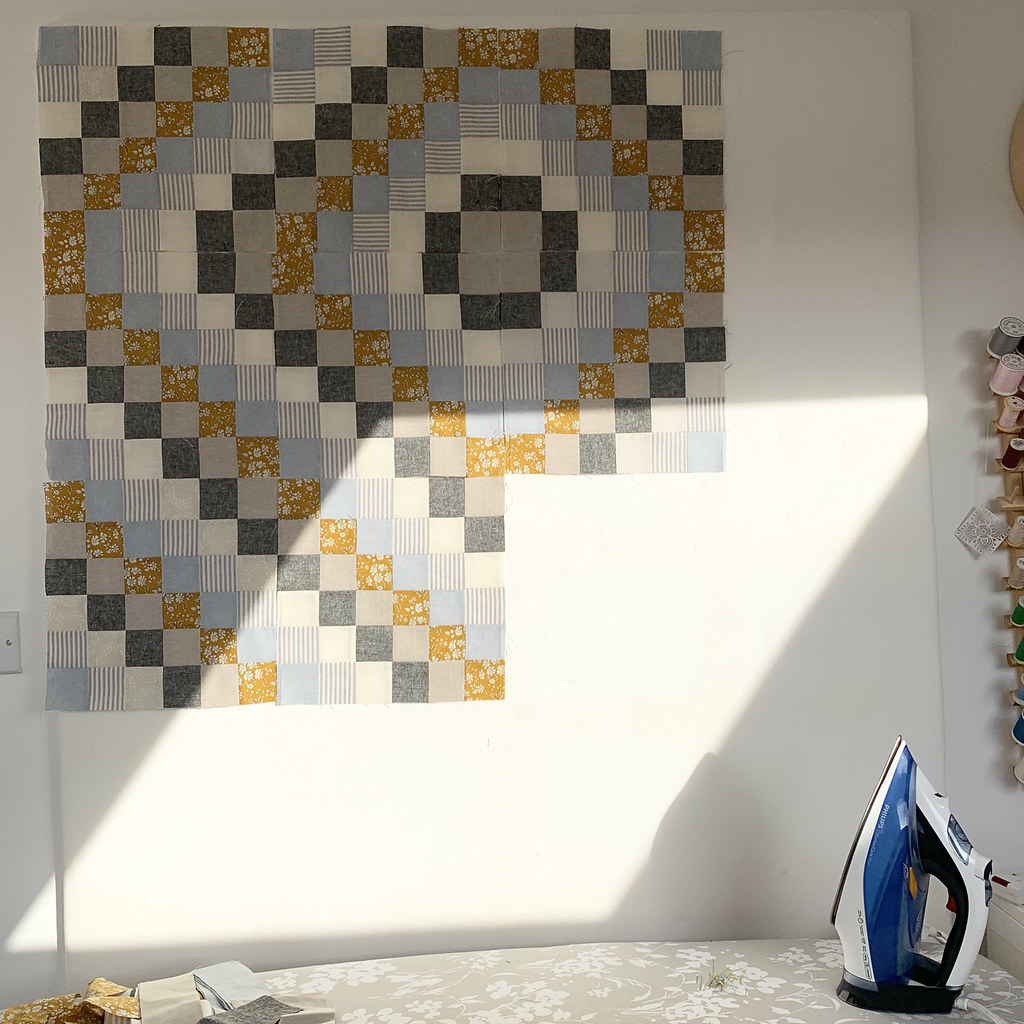 So, this is currently what's on my design wall. Just getting to this point has taken me forever...but maybe that's because I had the remains of flu while sewing these blocks, so was sewing a line and then resting, sewing a line and then resting - I didn't remember this being a pattern that takes long to come together. I can't decide if I love it or am just a bit meh about it...if it ends up being the latter then I may be posting about it in a few years time and, as with the red quilt, trying to make a replacement for it, but finding nothing can compete with the softness of the sherpa fleece and therefore being stuck with it forever...

Finishing all the uncertainty with a flu update: nearly three and a half weeks later, I still have a cough, but I think I may finally be nearly better! I started the new week feeling really quite perky, evidenced by cleaning bathrooms and vacuuming before 9am! Extraordinary scenes with or without the remains of flu in my case.