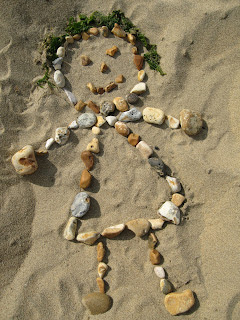 So it's the last week of the holidays and I'm feeling a bit glum about it...it's been so lovely having the children at home - late mornings, late evenings and altogether much more relaxation and fun. The weather had been so good over the bank holiday weekend (or is it just that it's been so bad for the rest of August that we now think 22 degrees is a scorcher?) that we thought we'd go off to the beach today...the forecast was good, it looked fine when we set off and yet the first hour on the sands was spent feeling very British with all our woollies on, huddling in the shield of two hired (extortionately priced) wind-breakers and looking up at the biggest, slowest-moving black cloud I've seen all year. 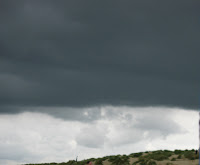 I've cropped most of the beach out of the photo to preserve the modesty of one particularly brave man who had put most of his naked body on display, save for a very small pair of trunks, but even without the sandy bit, you get the picture as to quite how mean-looking the cloud was. Weirdly though, absolutely no rain accompanied it....thank you! 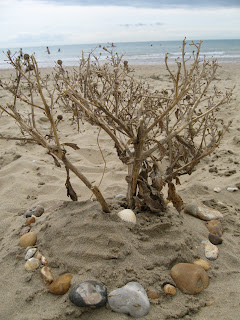 No matter though...five hours later and the black cloud was a distant memory and we even had to apply a small amount of sunscreen. We spent much of the day, when not paddling, making these pebble pictures, digging holes and gobbling sandy picnic food. There will be no crafting tonight...seaside air always makes me incredibly sleepy; I have no idea how coastal dwellers get a thing done! 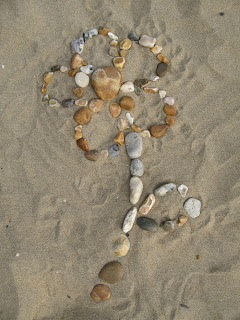