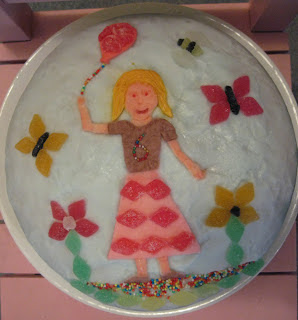 Every year, no matter how busy he is, Ian always makes Zebra-Girl and Dinosaur-Boy's birthday cakes (this year he was reeeeeaaaaalllly busy, so I ended up baking the canvas for him to decorate). It's half-eaten now, but Zebra-Girl loved it.

The cake I made for my mother's birthday (and I can't picture it here as I refuse to display something so horrifically ugly) was interesting. It was in the shape of a heart and I'd iced it with pale lilac icing and then used some purple crystallised petals to create an iris (her favourite flower)...however, I had no green for the stem, so that ended up purple too. Once I'd finished it I then cleverly put it on a plate that wasn't completely flat...can you guess what happened to the icing?

Well, my sister had came down from London and with the children off in their various educational pods for the morning we had some rare time just the three of us. I lit the candles in the utility room and then came back into the kitchen where Laura and my mother were...wanting to share the surprise cake moment, I asked my sister if she would mind carrying through the 'thing' that I'd left in the other room. She obliged and came round the corner carrying it, with a huge smile on her face and singing happy birthday very enthusiastically, but our tune was rapidly obliterated by the snorts of hilarity that she became unable to contain and as she came closer to our dear Mama, who was then able to get a better look at the cake, she too ended up screeching with laughter until all three of us were completely bent double. 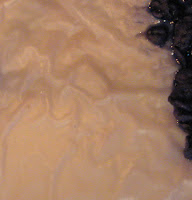 Having taken in and expressed her horror about the fact that the icing looked like the skin around a pug dog's forehead (pictured left, as it does seem unfair not to illustrate the disaster in some small way), my mother then said 'what is it?' gazing at the purple sugar crystal blobs inquisitively....and somehow, Laura, who I don't think even knows herself how, said: I think it's an iris...at which point we laughed even harder as none of us could quite believe that she'd guessed at what I'd intended it to be...in some ways it was possibly the very best cake I've ever made as it propelled us off on the right foot for a high-spirited morning. (NB. Before you think that my mother and sister could be described as heartless or ungrateful...really, it was so ugly there was nothing else you could do but squeal with laughter at how on earth I managed to create such a sight and I loved that they couldn't hide it!)

It has come to light after my last post that I seem to have inadvertently given myself quite a different persona to the one that I actually possess...it would seem that I have in some way implied that I have the lovely earthy goodness of Tom & Barbara from The Good Life and that not only do I spend my time baking almost constantly (I do bake occasionally, but baking on the scale pictured is strictly confined to one week in September each year), but also that I have my own lovely hens in the back garden laying tasty eggs for me. I so want to be that wonderful person, that actually I spent a happy ten minutes thinking up names for my little clucking wonders (Rosie, Mary, Millie...), but actually my eggs, while very definitely free-range, were actually purchased in Sainsbury's and I am in fact, by nature, so horribly un-muddy (it pains me to wear trainers, if that gives you a clue - something to do with the idea that they represent an expectation or a willingnesss to get a bit grubby should the need arise) that I simply wouldn't be capable of even collecting the eggs from the little dears, let alone keeping their barn (yes, I'd built one of those in my head!) tidy and clean. 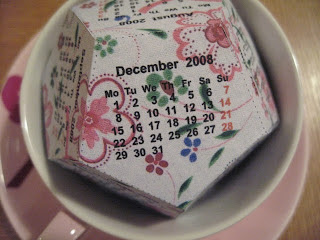 Anyway, I think I am perhaps quite giddy with tiredness tonight and this post has been long and rambling so I will finish with a picture of this of a 3-D calendar that I made up after seeing some on Sarah London's lovely blog. I'd seen the pattern for them elsewhere and had been put off by it looking slightly complicated (it's not at all, but it looks fiddly when you first see the print out). Sarah had printed patterns onto her paper before printing the actual calendar and this idea of using it as a way to display favourite fabrics suddenly made the whole idea much more appealing. It's been sitting in this teacup all week, so that's where I've ended up photographing it too. I have to confess to using superglue to stick it together after getting slightly frustrated with Zebra-Girl's not-very-sticky glue stick, which may have been unnecessarily heavy-handed, but it will definitely stay in one piece now!
Email Post