A man with a van brings much happiness... 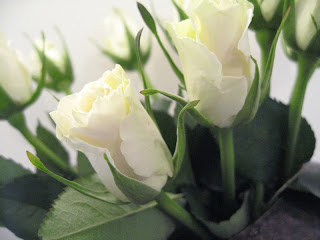 What an exciting weekend my sister and I had as a man with a van drove between our houses, swapping our belongings! My sister, Laura, has just had her bathroom made smaller in order to create a dressing room and so she no longer had a place for the wardrobe that's been in our family for as long as I can remember (she inherited over 20 years ago when a relative died)...and as I have been surviving with only 45cm of clothes hanging space for the last 6 years (I know - and Ian said this was a good thing...he foolishly thought it would stop me buying too many clothes, as if a girl would let the small issue of storage stand in her way!) I was the perfect person to off-load it onto. 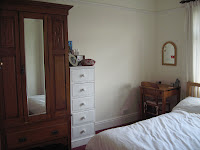 Laura did this fully aware that it is rare for an item of furniture to come through our door and not be painted in a shade of white...but actually now it's in place I can't decide whether it needs it...opinions would be greatly appreciated.

Anyway, the wardrobe arrived with a drawer full of goodies....one bag of Marks & Spencer's eclairs (unfortunately these can't be photographed as loading up the new wardrobe needed some confectionery accompaniment), a fantastic grey mini-dress that she'd had on such long-term loan (about 7 years, but suddenly I was having 'can't live without it' feelings) that it feels like a completely new garment and also two beautiful bouquets of white roses, one of which is now in front of the fireplace. What lovely, lovely surprises!

Alarmingly the wardrobe had locked itself in transit and the key seems to have long been missing, so Ian had to do very clever things with a paperclip! 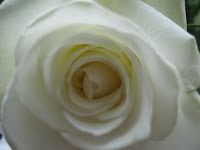 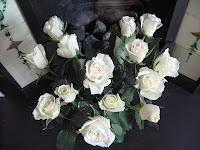 My offering in return seems rather paltry, but I am hoping that she will love it as much as I loved all my goodies from her....A couple of months ago Laura had admired my doorstop, but I hadn't been able to make her one because the postage on 2.5kg of rice may have been a bit excessive (if only I had known earlier of Jo's tip at Today We Are.... for making this post-worthy - she came up with the idea of using industrial strength velcro on the bottom, instead of sewing it up, so that it can be filled at the other end). Anyway, a man going round the M25 just for us seemed like too good a door-stop-delivering-opportunity to miss, so I made her what I thought would be an identical one...but somehow it ended up taller and skinnier than the original and Ian & I both agreed that it's lack of chubbiness wasn't quite as pleasing, so we've kept that one for ourselves and have given Laura the tubby one. Despite the fact that the shape wasn't quite as nice, it was quicker to make and the corners are neater - I love doing things a second time around and ironing out all the flaws of the first model! 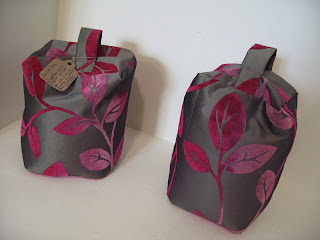 While making the handle I tried out a tip that Melly from Melly & Me had left for me on a previous post when I'd pondered on whether bag handles were meant to take half an hour to turn inside out. She'd suggested sewing one end up, then using the seal to poke something against (a chopstick/pen) until the closed end has come out through the open end, at which point you can trim off the bit where you had sewn it shut. It worked perfectly and saved me so much time. 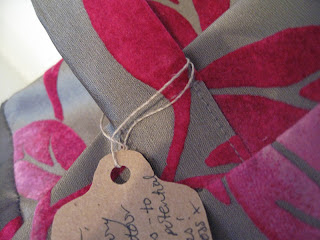 Anyway, we are currently deep in preparations for Zebra-Girl's party...In an attempt at subverting the traditional pin-the-tail-on-the-donkey game, Ian is currently attaching a giant cut-out of his head onto the body of a slightly less giant Pele, in order to create the basis for a pin-the-jelly-on-Zebra-Girl's-daddy's-head game...watch this space, I will hopefully be blogging this masterpiece tomorrow!