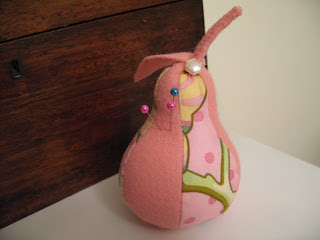 ...But before I introduce them, let me show you this pear that I've made. I've long admired the row of pears on Kwoozy's site and then saw one in Heather Bailey's flickr set too and I thought I might have a go. 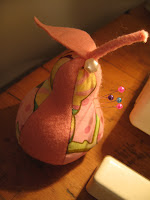 There's a project that will take half an hour I thought....mmmm, two hours later I was just finishing. Actually the reason it took me so long was that using the felt & Heather Bailey material was my second choice (I had some of her fabric shipped over from the states recently for £1.98 per 1/2 yard...I can't believe the price difference - so unfair!) - my first choice was some creamy upholstery-weight material, that had a slight sheen to it, as really I had wanted the pear as an ornament in the living room, but it was a complete disaster as the fabric frayed so badly that the pear seemed to be disintegrating every time I so much as tried to pin another seam. I hardly ever abandon a project, but I eventually gave up with only one seam to go and set about making this pink pin cushion version instead - much quicker and very useful too!

A while ago I read a post (I can't remember where...which seems to be a regular occurrence with me) about the children of bloggers and their anonymity (I've noticed that while lots of bloggers do use their children's real names, many refer to them as something else, which seems like a good idea in some ways)...and it's been playing on my mind a bit, so I've now decided to do something about it. From now on my little boy will not be known by his real name, but DINOSAUR-BOY!!! And my little girl will adopt the name of Zebra-Girl. These are their favourite animals, so they're not completely randomly chosen. I can't tell you quite how dull it has been going through every previous post and photo and changing the names on them...but it's done now and I feel much better! 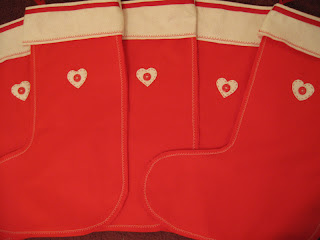