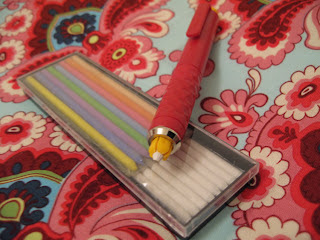 ...such was the response to the wonderful multi-coloured propelling chalk pen that I had raved about last week, that it would seem unfair not to be responsible for dispensing at least one into the lovely bloggerty online sewing community.

Is it a thank you for all your lovely comments and support and for coming back and reading more? A celebration of my 58th post (because who wants to wait for a round number anyway)? A welcome if this is your first visit?...or a sewing-themed carroty attempt to entice lurkers out of their cosy corners? Well, perhaps all of those.

But do leave a comment if you would like the to win the chalk marker and your name will be entered into Zebra-girl's winter hat....and drawn out by Dinosaur-boy because he can't yet read, and so will be the fairest of invigilators. I am also putting up for grabs with it, a fat quarter of Amy Butler's duck-egg blue Belle French Wallpaper, as it is one of my favourite fabrics and if you like it too, it may prove a wonderful addition to any chalky adventures. 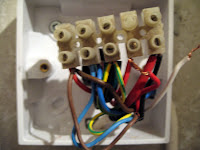 I will announce the winner by the end of the week (or maybe a little before to try and catch the post)...and what a week it will be...I am feeling tired just thinking about it. We are in the middle of ripping our old kitchen out in preparation for a new one being put in straight after Christmas...but unable to find an electrician before the plasterers arrive later this week, we have been forced to venture into the world of electrical faire du bricolage. I have been rooting around inside this box (eyes left!), not because I have any electrical experience at all, or even a desire to gain it, but because without doing so we faced the prospect of no heating and no hot water. So with trusty father-in-law on the other end of my mobile phone I began unscrewing and chopping at the wires with a certain degree of surprise that we actually owned of a pair of wire cutters in the first place...as the level of incompetence became clear, arguments ensued between Ian and me as to who should be doing this: No, I'll do it, you shouldn't be doing this, I love you too much! No, I love you more, I'll do it (I won). Half-way through I got the fear...no, it's all too dangerous, what if I blow the house up? So after getting one of the screws wedged in the wrong place for a worryingly long time, I ended up putting it all back together again, with assurances from the f-i-l that he could be here by breakfast time to return us to 21st century living conditions...only to find that when I turned the electricity back on I had inadvertantly cured the problem just by taking it all out and putting it straight back in again! Mmm, strange....but I have no objection to being called Sparky!
Email Post