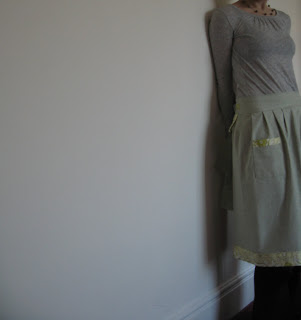 Well, finally I have one Christmas present that I can actually blog about, for the recipient (my 79-year-old grandmother) doesn't actually have an Internet connection. For as long as I can remember I have felt that grandmothers (and in particular my own) are synonymous with a nice half-pinny (along with the flans, jam tarts and crunch-or-sog that she would produce while wearing one). So with some sage green Kaffe Fassett fabric in one hand, some florally Heather Bailey in the other and a copy of Amy Butler's In Stitches open on the relevant page I set to work on making my grandmother's 'uniform'. I have long been a defector when it comes to using anything that resembles a pattern (the two exceptions to this rule being Molly Chicken's Mousey-in-a-bed pattern, and Heather Bailey's Baby Booties pattern), but at the end of a long run of self-patterning all my Christmas presents I decided that maybe I should give them more of a chance...and I'm so pleased I did! For I did my first pleats and found them to be so much fun and so hugely satisfying to create, that I may perhaps go on to develop a full-blown pleating addiction (mmm, deal with that one, Priory! Symptoms could lead to wearing pleated jeans and at that point would call for immediate detention to stop the sickness!). Anyway, this aside, Miss Butler's patterns are remarkably easy to follow and have the most divine little details - such as the little loop that you can put your tea towel through. 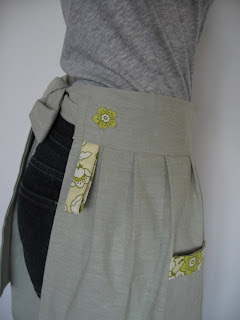 So here I am modelling it - all photos taken by me in one of those weird photo shoots where you find yourself without a small, willing child to act as photographer and so are forced instead to leap around the room trying to guess at where you may have pointed the camera when you pressed the self-timer button, while simultaneously trying to look composed and as though you spend your entire life leaning against neutral backgrounds in between popping batches of tartlets into the oven. 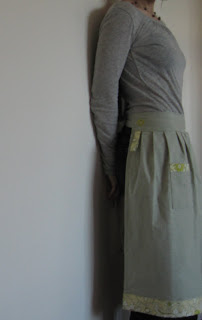 I am particularly delighted by the small flower that I machine appliqued onto the waistband, as this is the one place where I deviated from the pattern...call it symbol of my pea-sized rebellion. So everything had been going swimmingly...and then I remembered that actually, my grandmother had said she didn't much care for green...
Email Post