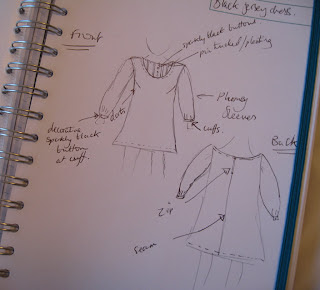 Firstly, thank you so much for all your input into the naming of the formerly known Lady Valet! I have almost settled on something, but want to discuss it with Ian tonight before finalising...yes, he's in for a fun evening - I'm sure it's the type of conversation that he relishes...and if he reads this first he may even dawdle on the way home!

Above are my plans for a dress that I'm currently making...I've had some thick black jersey in the cupboard waiting to be made into a shift dress for a while now. My starting point is a dress that I bought from Gap when I was about 18 (pictured below...not very clearly as that photo was actually taken ages ago to display the bag, rather than the dress, but you get the impression: it is very simple and plain and I love it). So that gives me the shape of the dress, but I am rather a fan of clothing that has a bib or a yoke at the front...preferably with little pin tucks or pleats to it, so I've put that into my design with a slightly wider central pleat, onto which I can add a vertical row of sparkly black buttons. The other problem with the Gap dress is that it has short sleeves, but is very much a winter dress, so I normally have to wear a long sleeved T-shirt under it...however, I want my new model to have long plumey sleeves, slightly puffed at the shoulder and then draping down over narrow little cuffs at the wrists...more sparkly buttons. Darts at the bust to give a little shape, a zip at the back to allow me to wear it, rather than just look at it and....that's about it! You'll notice that my plan shows one arm being somewhat longer than the other...that's my wonky drawing rather than a feature of the dress, although I've nothing against asymmetrical dressing as a concept. 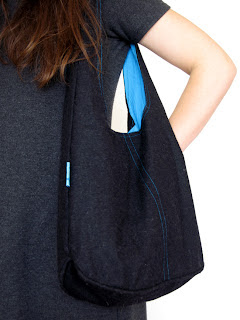 Apart from my kimonos and some altering of existing garments, I've never made a garment from scratch before, and after inflicting on poor Jo my internal dialogue over the merits of first buying a Simplicity pattern so that I could perhaps learn something about the art of dressmaking before launching into creating the aforementioned dress, I decided that this may be a very good idea indeed and headed off to the shop, ooohed and aaahed over the pattern catalogue and eventually chose something from their 1960s retro range. I trotted happily back to the car with the pattern in my bag, just in time to pick Dinosaur-boy up from nursery, with visions of me being like a 'real seamstress' who can actually buy patterns and make fabulous-looking things from them. Maybe this was relying a little too heavily on the 'I buy, therefore I am' principle, because the illusion was shattered yesterday evening when I nearly wept on taking all that thin paper out of it's packet. A million lines intersecting one another, confusing codes, a presumption that I can actually understand the sewing terms that they throw around willy-nilly in the instructions...it was awful and confirmed the very reason why I had worried about buying one in the first place: that it would reveal my incompetence. It is now back in it's packet with the picture facing the wall so that I don't have to look at it and I am ploughing on with the dress I planned to do in the first place...and actually I am having so much fun making it, even though I am doubtless doing everything in a slightly odd way! But either way, I now have so much admiration for anyone who can actually follow one of those patterns - I was truly out-foxed by it!